I hate to be the bearer of bad news. It brings me nothing but sadness to dial back the hope that our characters have been slowly but surely piecing together for surviving the pending nuclear holocaust, but I just can’t shake this week’s image of the Ark, exploding in fire and crumbling into ash against the night sky while Clarke and Roan (fresh off making a last resort blood pact to ensure the survival of their respective clans) watched in horror and disbelief as their Plan B literally went up in flames. Spoiler: that happened! Now, neither the list nor the lottery for spots on the Ark are options, and for the moment the only viable plan is shooting Abby (who is experiencing hallucinations of a boil-covered Clarke) and Raven (who has already had and is likely to have another stroke) into Space via a rocket stored inside Becca’s lab, just so they can attempt to make nightblood in zero gravity. Think they can pull it off? It’s the The 100, so anything is possible. But I think it’s best we all better buckle our seat belts for take off, because it’s going to be an extremely bumpy ride from here on out.

Episode 5 begins with Abby, Raven and Jackson hard at work and making little headway on cracking the code to synthesizing nightblood. Raven, who has been both plagued by headaches and blessed with random spurts of unexplainable knowledge after separating from the chip by means of an EMP, experiences what appears to be a miracle of physics: she starts flying around the lab. Or, at least that’s what she believes is happening in her head. In reality, she’s experiencing a massive seizure and a quick intervention by Abby and Jackson saves her life.

A scan reveals that the chip has left a lasting effect on Raven’s mind; she’s processing information at a rapid-fire speed and part of the chip’s code (basically a digital version of Becca) is still in there somewhere. But Abby warns Raven, who’s riding the high of her digital upgrade, that pushing herself could mean death. “So what, survive long enough just to watch everyone else die?” Raven tells a cautious Abby. No, she’ll do whatever it takes to find a solution to their nightblood problem, even if it means she won’t get to enjoy the future she’s securing for her friends.

Raven’s future in the longterm may be uncertain, but for the moment it look as though she’s headed back to space. The lab is housing a giant rocket. (How did everyone miss the wall signage that suggested there was a spaceship hidden in a closet somewhere?) I, like the 100 delinquents and their elders, have become quite comfortable with Skaicru’s feet firmly planted on the ground after the last of the Ark crashed to Earth, and Raven’s palpable excitement about returning to the place above the atmosphere—a post-chip, brain-bleed inspired her theory that nightblood can synthesize in zero G—isn’t felt by everyone. But the ship has two seats, and someone has to do the science work, so Abby will be riding shotgun.

Checking in on Octavia, the once unbreakable Skairipa is in need of a little help. Lucky for her, Ilian finds her struggling to make her back to Arkadia and offers his hand. At the camp, before nearly succumbing to her injuries, she manages to eek out a warning to Harper, “War is here,” alerting the group that Azgeda is on their way and they’re not coming as friends.

Skaicru is faced with two options for handling the incoming war party: defend Arkadia at the gates with a ring of fire (this ends up being a prescient image considering the way things end up this week) or ride out and surprise their foes. Monty pushes for the latter, diving into a larger leadership role this week and owning it well. In a rocky mountain pass, Clarke intercepts the war party, while Monty leads a tactical outfit of snipers on the ridge with their sights on Roan. Bows are drawn, and laser-pointed guns are at the ready, while Marcus and Bellamy play “helpless and tied up in the middle.” Despite the tension, Roan and Clarke manage to convince their respective people to let them have ten minutes alone to hash it out, and hopefully avoid a massacre.

In the cave, Roan spits conspiracy theories about Skaicru’s betrayal and plans to only save themselves, while Clarke tries to talk him off a ledge. On top of the accusations, Roan piles on a healthy serving of guilt in Lexa’s name, questioning Clarke’s motives to save everyone or just those close to her. “Lexa, she was Trikcru, but she rose above loyalty to her clan…You tell yourself you’re the same,” he says. “I was willing to sacrifice my own mother to stop A.L.I.E.,” Clarke replies. Roan: “And I was willing to sacrifice mine to help you. Ain’t we a pair?” Touché. The two finally agree to split the Ark 50/50, and seal the deal in blood.

While the two leadership are busy negotiating, Monty struggles to keep his team on task. Riley, who is still reeling from his experience of being enslaved by the Ice Nation, goes rogue and decides to focus his anger on Roan by attempting to shoot him against orders. He disappears into the woods, sending Echo and Bellamy off on a side mission to stop an assassination and the inevitable bloodshed that would follow.

“Don’t you get sick of it—sides?” Bellamy asks Echo as they search for Riley. Echo is fiercely loyal, to a fault, not unlike Bellamy himself before Pike showed him that isolationism and violence in the name of protecting your people often does more harm than good. But Echo isn’t quite ready to see the light, and quotes the late Queen Nia in her defense: “War makes murderers of us all.” And when it comes to talking Riley’s finger off the trigger, Bellamy puts her words and his regrets to good use, telling him, “War made me a murderer. Don’t let it happen to you.” Crisis averted—for now.

Meanwhile, in Arkadia, things are just heating up. Sure, Ilian saved Otavia’s life by bringing her home, but she was simply the key to getting him past the front door. Now, the tech-smashing, AI-hating Grounder is like a kid in a candy shop, and he’s ready to burn it all down. No matter how much Octavia pleas and tries make Ilian see sense—“I was a prisoner on this ship, but now we need it”—burn it down he does.

The 100 Season 4’s key art has alluded to this moment for months now, and not very subtly. In the season’s promotional imagery, Clarke, Raven, Octavia and the rest of the gang look down on the Ark as it explodes into a fireball. This week, show writers made it happen, much to our horror. The Ark’s demise means a few things: 1) In the most final sense, there is no going back. Skaicru’s past is behind them for good, and the damaged Earth they’ve landed on is now their one and only home. Consider the umbilical cord severed. 2) There’s no hiding—literally—from the radiation. Without the Ark, or a viable bunker, the people will need to find a way to adapt and survive on the surface. The 100 has already proved that humans can adapt to living in space for over a century, so how are could it be to survive on a dying Earth too?

— It’s great to see Niylah return to the mix this week, and she even shares a tender moment with Clarke.

— A few characters were missing entirely from this episode, and while that’s not totally unusual, it seemed odd that we wouldn’t at least check in with the rest of the group sent to investigate the island. And I’m also going to assume Jaha is off investigating another privately owned bunker, and Jasper was listening to post-apocalyptic indie in the rover. 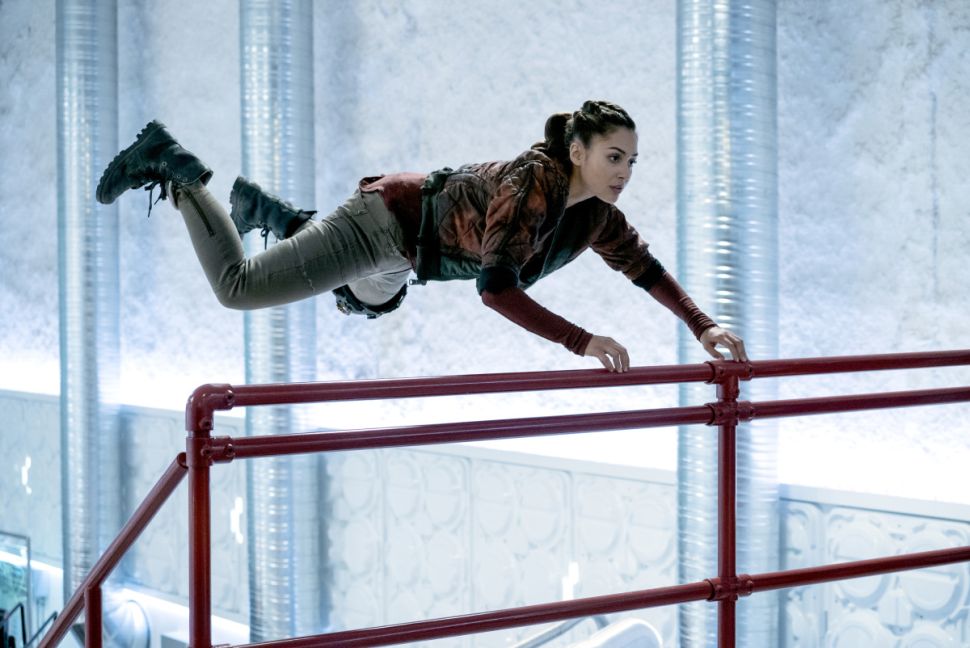