The Black Rain is here, and it’s just as bad—scratch that, it’s totally worse than we thought it would be. No make-shift hazmat suits will do now, and not only does this new weather phenomenon burn your flesh but it also has a tendency to taint the local drinking . That about settles it: the end times are here. But the game’s not over just yet. (When is it ever on The 100?) While our crew remains one barrel of rocket fuel too short to fly to space, Abby has been cooking up a theory about using Luna’s bone marrow to make a night blood vaccine. The only catch is someone will have to volunteer as tribute.

This week’s big theme is grappling with the guilt, or in some cases the lack thereof, of being a murderer. At this point in our story the consequences of killing are well trod territory, so trying to eek out some new revelations about how to justify murder is a tough nut to crack. And while the plot line does shed light on less developed characters like Harper, or characters who have recently taken a new direction such as Octavia, with Kane, Bellamy and most of all Clarke, do we really need to go there again?

Arkadia is the first to get hit by the Black Rain, which is preceded by an eerie yellow light and dark thunderous clouds, not dissimilar to the calm before a tornado. And then, with a flash of lightening, it begins. Skaicru scrambles through the chaos into the remains of the Ark, and in the mayhem Harper brushes off the pleas of a friend who has fallen behind. As the boy gets trampled and soaked in acid rain, she watches from the safety of the Ark before Bellamy and Kane circle back for him. Harper tries to make up for her oversight, but it ultimately ends up costing the boy his life. Her scenes are somewhat minor in the episode’s overall plot line, but they’re a useful way to show that in these dire times no one is spared from having to make tough choices, such as putting your own life above someone else’s. Marcus’ words as Harper grieves for a boy she barely knew, but inadvertently killed: “Who you want to be doesn’t always win.”

Bellamy, always the hero, presents a more extreme example of this scenario. While nearly all of Skaicru made it inside before the rain hit, two men from the camp (the younger one of the original 100) are caught in the storm. Bellamy puts on the closest thing they have to a hazmat suit, and sets out determined to save the stranded men, ignoring Kane’s pleas to have faith in the resourcefulness of others (a not so subtle hint about Bellamy’s obsessive concerns over his sister’s independence) and wait until the rain subsides. Bellamy takes off anyway, but he doesn’t make it farther than the rover parks outside when his suit starts to fail.

All signs point to Bellamy’s journey being a bust, and yet he still chooses to ignore the bad omens and takes the truck, only to get stuck in the mud before reaching the two lost men. Through their painful calls for help over the radio, he’s forced to break the bad news: that he won’t be able to make it after all. Stuck in the rover until the storm is over, Bellamy laments to Marcus over the radio his guilt over failing to save his sister—the real root of his sadness. “You can’t save someone who doesn’t want to be saved,” Marcus tells him, invoking the memory of Bellamy’s mother. But let’s not forget, it was Marcus who killed Bellamy’s mother years ago, and Bellamy is quick to remind him. In the future, it seems, no one is able to escape becoming a murder, and there’s no different whether it’s for the greater good or self-preservation.

Two characters fresh off separate respective murdering sprees are Octavia and Ilian, who also happen to both find themselves on the outskirts when the Black Rain hits. Ilian, who was spared a death sentence for destroying Arkadia, is following Octavia’s trail as she flees Skaicru and her demons to who knows where. The pair find themselves stuck for the duration of the storm together, nearly naked, inside a cave, without much to do but confess their sins and their guilt. When Ilian tells Octavia about the terrible things he did to his family under the influence of A.L.I.E., she snaps, “Go home Ilian, you’re not a murderer. You feel the way you’re supposed to feel after you take a life, I feel nothing” But while Octavia puts on tough front, Ilian doesn’t buy her story about giving in to the dark side. In a desperate move to prove him wrong, she tries to commit suicide by walking out into the rain before he stops her. And in a moment we see coming a million miles away, after they spar a bit, they hook-up while Octavia pleads, “Just make me feel something else.” Post-storm, and post-romance, Octavia has seemingly turned over a new leaf, throwing her knives into the cave’s pond and joining Ilian on his journey back to his home. For some, it’s never too late to start over.

On the island, Clarke is finally reunited with Abby. They commiserate over whether Abby has gotten any sleep or not, because now her post-A.L.I.E. symptoms are becoming harder to ignore. But more importantly, if they can’t go to space there is still another possibility: using Luna’s bone marrow to make people into nightbloods. However, to do this they’d have to expose the test subject to radiation that would likely kill them. The big question: is sacrificing someone for science that will save the human race worth it? “If I take a life to find a cure, does that make me a murderer?” Abby asks Marcus over the radio. “Taking a life should never be easy,” he replies. Here’s an even bigger question: if they were to make night blood in space, wouldn’t they have to test that on a living person at some point too?

Emori overhears Clarke and Abby’s chat about a sacrificial test subject and jumps to the conclusion that the most likely candidate would be her. Inside Becca’s sleek mansion, John cooks dinner (apparently he’s really good at it) and Clarke discovers all the comforts of luxury living. But their domestic bliss is only momentary, interrupted by an intruder Emori identifies as a Grounder who once tortured her and her brother. The three teens are thrust into a debate over what to do with the man: Emori wants to kill him, while Clarke defends sparring his life. “Today, I am the commander of death,” Emori declares, before Clarke proposes an alternative; if the man is going to die anyway, why not make him the nightblood test subject.

And so the Grounder becomes Abby’s first nightblood guinea pig. “I hope he survives,” Murphy says, since that would mean everyone has a fighting shot at receiving a working vaccine. “I do too,” Emori echoes, revealing that her claims about the man were all an elaborate ruse to make sure someone else became Test Subect #1. But since Murphy is Murphy, why am I not surprised that he’s impressed by her. Emori, who has only ever known life on the edge, has no qualms about killing to survive. For her, “living” as Jasper puts it, is a distant fantasy. “Now that, that’s a survivors move,” Murphy tells her.

Tune in next week to find out if bone marrow transplants work.

— Even though the Black Rain is super harsh on unprotected skin, I’m raising the chances of survival for our characters to 41% because bone marrow transplants have been known to have high success rates IRL. In the future, I assume there would be even better odds. 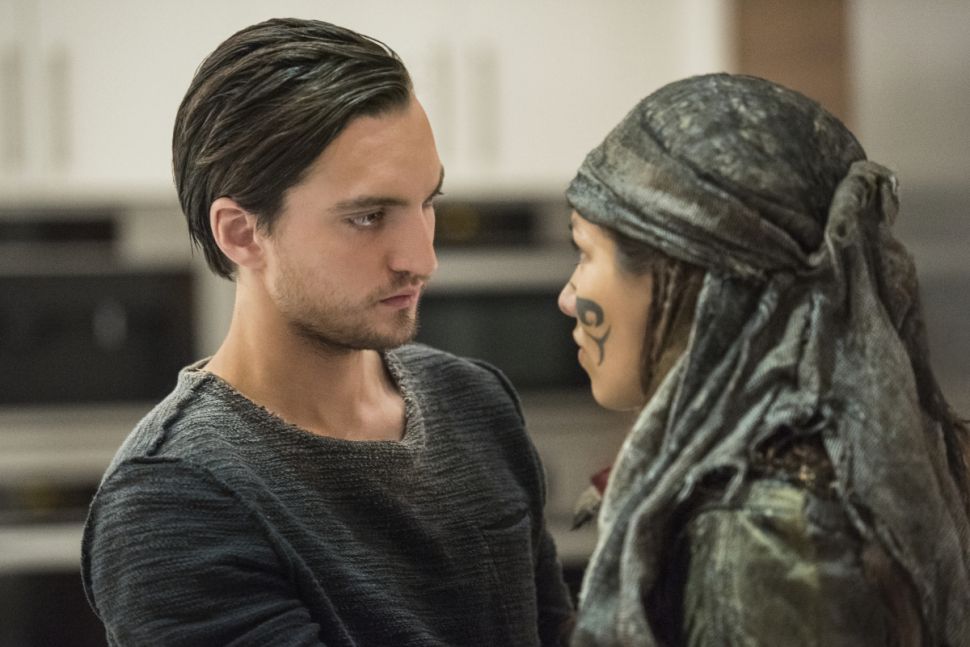