“Actually, if you look at the facts, Hillary Clinton won the popular vote. The majority of voters that went to the polls chose Hillary Clinton and our agenda,” Wasserman Schultz claimed. The popular vote mantra has been a favorite talking to defend Clinton’s election loss, but it’s meaningless given that the president is chosen by the Electoral College. The argument also fails to acknowledge the 90 million eligible voters who didn’t bother to vote—and that many of the votes Clinton and Trump received were cast against the other candidate, rather than in favor of one.

Van Susteren followed up by asking about Clinton’s post-election appearances, and what her future plans may be. Wasserman Schultz responded with rhetoric that should quash any doubts that she overtly favored Clinton during the Democratic Primaries. “I think Hillary Clinton is doing exactly what she should be doing—using her very strong voice and her overwhelming popularity to help make sure we can continue to advance the dialogue,” she said. “I think Hillary Clinton has an interest in doing what she’s always had an interest in doing, which is helping to make the world better and to focus on making sure that government works to assist people in making their lives better.” Wasserman Schultz’s praise couldn’t be more vague, and fails to cite any accountability and responsibility for Hillary Clinton’s election loss.

Wasserman Schultz abused her position as DNC chair, which presides over the Democratic primaries and is supposed to ensure neutrality, to tip the scales in favor of Clinton. Even before the release of DNC emails that publicly revealed how resentful Wasserman Schultz and her staff were toward Sanders and his supporters, it was a widely cited fact that she favored Clinton during the primaries.

Wasserman Schultz’s unabashed praise and admiration for Hillary Clinton (while at the same time scolding Sanders for pointing out that the Democratic Party isn’t a grassroots party, but rather is beholden to big money interests) is a constant reminder to progressives that Democrats haven’t changed at all. Debbie Wasserman Schultz is still viewed by the Democratic establishment as a leader and spokesperson, while Bernie Sanders and his supporters are viewed as unwelcome nuisances who threaten the status quo. 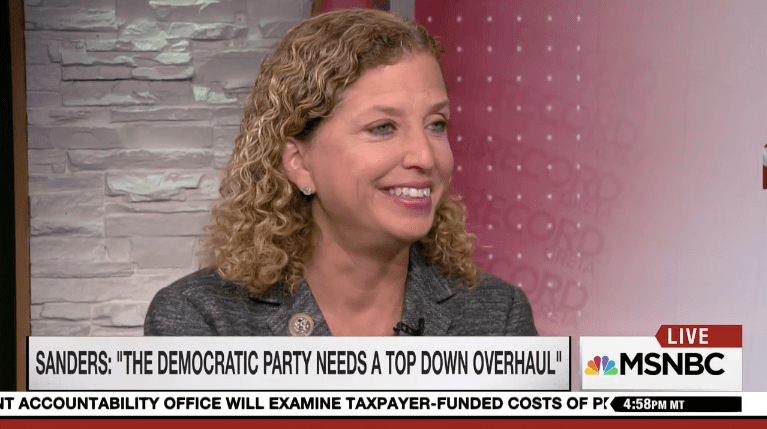