On February 25, the Democratic establishment sent a message to progressives that it will not make any reforms in the wake of the party’s embarrassing defeat in November. Bernie Sanders-backed DNC Chair candidate Rep. Keith Ellison was the initial frontrunner to become the next DNC chair until the Obama administration hand-picked former Secretary of Labor Tom Perez to challenge him. Former Vice President Joe Biden endorsed Perez, and one of Obama’s closest aides, Valerie Jarrett, called DNC members to vote for Perez for DNC chair leading up to the election. Despite Ellison making several concessions to appease the establishment, including openly endorsing a billionaire donor the to become the Florida Democratic Party Chair and reducing all criticism of Hillary Clinton, the DNC members chose Perez over Ellison—but not without controversy.

One hour before the DNC chair election, the DNC, which was still led by Donna Brazile—who was fired by CNN during the election after leaked emails revealed that she helped Clinton campaign cheat—changed the rules at their own discretion. Though DNC rules stipulated that the DNC chair election votes were to be public and transparent, Brazile made the votes private. The decision was most likely made to conceal any backroom deals and to protect DNC members who voted for Perez from backlash from progressives who have been pushing the Democratic establishment for reform.

On the first ballot of the election, Ellison received 200 votes to Perez’s 213.5, forcing a second ballot race to be cast. Idaho Democratic Party Executive Director Sally Boynton Brown received 12 votes, Jehmu Greene received 0.5 votes, Mayor Pete Buttigieg received one vote, and 20 out of the 447 DNC members abstained from voting. Given that Idaho overwhelmingly supported Sen. Bernie Sanders in the 2016 Democratic primaries, Boynton and her Idaho delegate supporters were expected to switch their votes to Ellison, which would boost Ellison’s vote tally to 212. However, on the second ballot, Ellison received 200 votes and Perez received 235 votes.

“I know for a fact all Idaho votes went to Ellison,” Idaho Democratic Party Executive Director and former DNC chair candidate Sally Boynton Brown told the Observer. “People are taking numbers and forgetting the human element that occurred. We are reviewing ballots on Monday so we can say who swung.”

That human element noted by Boynton Brown was backroom deals meant to ensure that the party leadership’s preferred candidate won the DNC chair race. A review on March 6 found that several DNC members switched their votes from Ellison on the first ballot to Perez on the second, including: Douglas Ballard of Arizona; Kenneth Sherman and Art Shankler of Democrats Abroad in Sweden; Kat Hoang of Texas; Janet King, Michael White and Daniel Quitugua of North Mariana Islands; Karen Kirkpatrick Valentine of Delaware; S. Anthony Long of Indiana; Glen Maxey of Texas; Carlos Odio of Florida; Ellen Rosenblum of Oregon; Kathleen Stanley of Hawaii and Charles Stormont of Utah. Its inexplicable given the close race and the dynamic between progressives backing Ellison and the establishment supporting Perez that these delegates would change their votes from the first and second ballot without some sort of influence or backroom deals being conducted in favor of Perez.

Rigging their own elections, primaries, and corrupting hiring processes to ensure their own political power and interests are perpetuated has been the Democratic Party’s modus operandi throughout the 2016 Democratic primary and post-election process. Dissent and protest from progressives and Sanders supporters have been ignored, suppressed, scolded and shamed, all while Democrats falsely call for party unity without extending any o,live branches to encourage that “unity.”

After the DNC Chair election, despite another slight to progressives from the establishment, unwilling to even grant them the symbolic victory of Ellison becoming DNC Chair, Ellison was paraded around by the establishment as a progressive trophy. Perez gave Ellison a ceremonial position as Deputy Chair of the DNC, a position with no power or authority that was fabricated on the spot to appease his supporters. Shortly after, Ellison was sat next to former DNC chair Debbie Wasserman Schultz, who resigned in disgrace after leaked emails confirmed what progressives and mainstream media already knew, that Wasserman Schultz was tipping the scales for Clinton throughout the primaries. It is fitting and deserving that the last opportunity for the Democratic Party to start to repair the rift within their own party was undermined by secretive deals to instill another uninspiring puppet preferred by the party’s wealthy donors and out-of-touch elitist leadership. 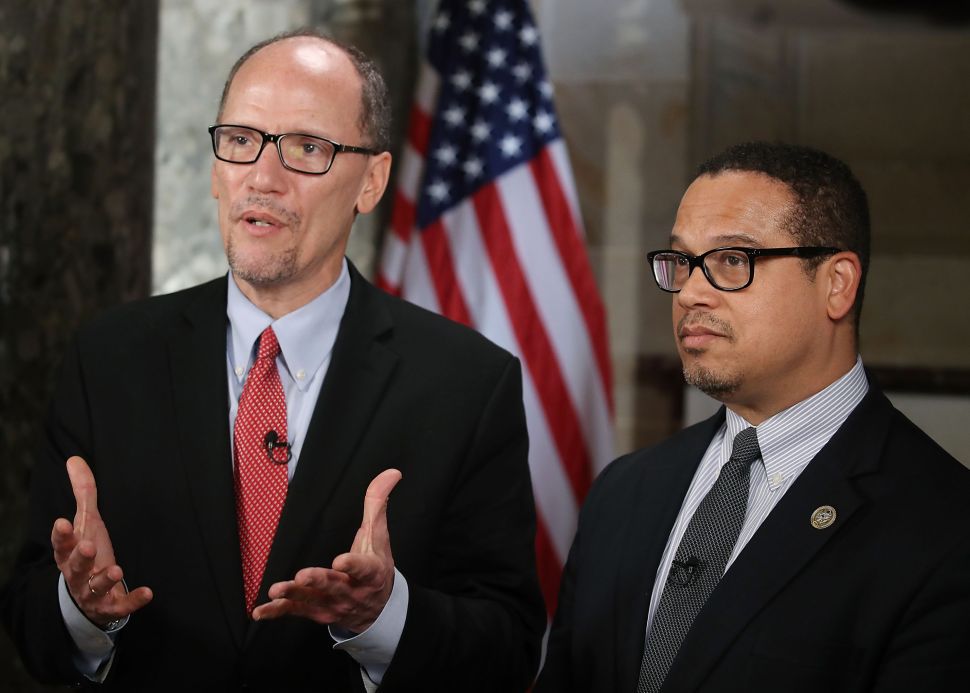