Roughly four months after U.S. Attorney Preet Bharara told reporters that President Donald Trump had asked him to stay on as the top prosecutor for the Southern District of New York, the Trump administration requested the resignation 46 U.S. Attorneys appointed by former President Barack Obama—including the Manhattan-based corruption-buster.

The New York Times first reported that Bharara was among the U.S. Attorneys asked to resign by Dana Boente, acting deputy attorney general—who rose to his position after Trump fired Sally Yates, another Obama appointee, for refusing to defend his Muslim travel ban. At the end of November, Bharara met with the president-elect and soon-to-be-Attorney General Jeff Sessions for an hour at Trump Tower and told the press afterward he had “agreed to stay on.”

The Department of Justice confirmed to the Observer that Bharara was asked to step down and noted it was typical for U.S. Attorneys to change with the presidential administration—which is especially true of the powerful post in the Southern District of New York.

“The Attorney General has now asked the remaining 46 presidentially appointed U.S. Attorneys to tender their resignations in order to ensure a uniform transition,” spokeswoman Sarah Flores said in an emailed statement, noting Bharara and his peers would remain in place until the Senate voted on their replacements. “Until the new U.S. Attorneys are confirmed, the dedicated career prosecutors in our U.S. Attorney’s offices will continue the great work of the Department in investigating, prosecuting, and deterring the most violent offenders.”

Bharara served as an aide to now-Senate Minority Leader Charles Schumer, who admitted to helping connect the prosecutor and the incoming president last year. The relationship between the senior senator from New York and the Queens-born commander-in-chief has since turned sour.

The Southern District of New York covers Manhattan, the Bronx and a few counties to the north. Much like his predecessors in the position, including former Mayor Rudolph Giuliani, Bharara used it to build a reputation by prosecuting Wall Street powerhouses

The work that earned him plaudits in the aftermath of the 2008 financial crisis—even though some of his convictions unraveled on appeal.

He reaped his biggest prizes in 2015, when he won convictions of ex-Assembly Speaker Sheldon Silver and former State Senate Majority Leader Dean Skelos—previously two of the most powerful men in New York State. The prosecutor also became known for his sardonic commentary on ethics issues, which occasionally landed him in trouble.

Bharara has also spent months examining whether Mayor Bill de Blasio traded public favors for donations to his now-shuttered political nonprofit, Campaign for One New York. The fate of both these cases, and of the current assistant U.S. Attorneys handling them, is currently unclear.

Bharara’s office did not immediately respond to requests for comment. 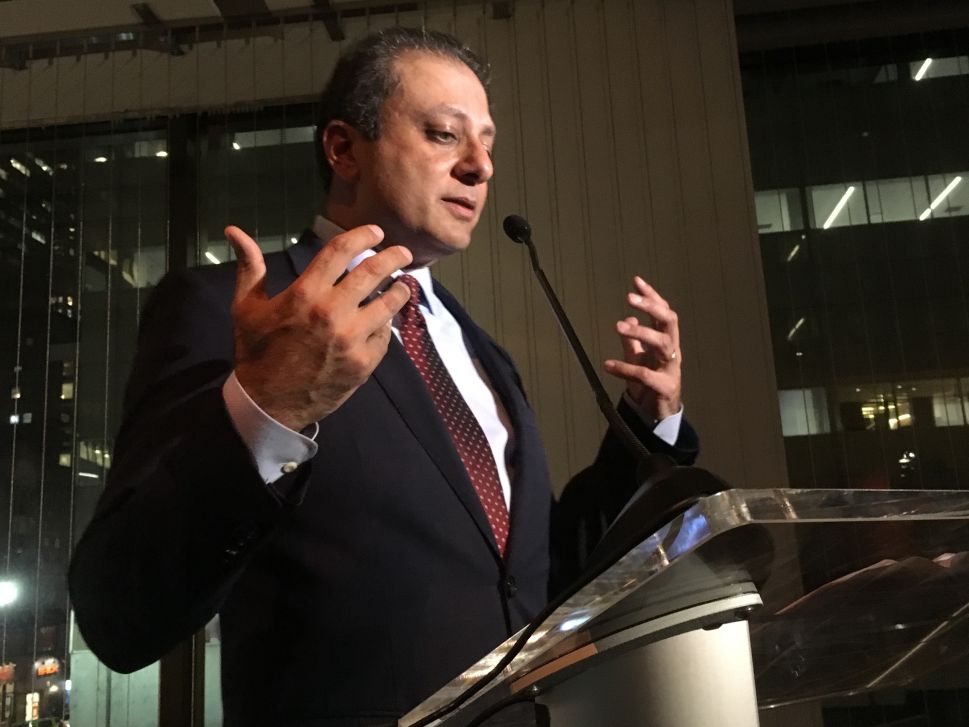