In this age of waxing laws and waning freedoms, a notable exception to the pattern of ever-tightening restrictions is gun prohibitions. New Hampshire no longer requires a license for the carrying of a concealed, loaded firearm; Florida is considering eliminating all “gun-free zones” (e.g., at schools); and Iowa may institute a “Stand your ground” provision and lower the age at which children could use handguns, to cite a few examples.

Such measures are politically palatable because, increasingly, Americans don’t believe in gun control—except insofar as it means hitting your target. Related to this, fear of government intrusion after Barack Obama’s 2008 election sparked a firearms-buying spree; likewise, many more black Americans are reportedly now purchasing guns in the wake of Donald Trump’s ascendancy.

All this stokes another fear: that the U.S. will become a gun free-for-all zone of murder and mayhem. But does data justify this concern?

Contrary to myth, the U.S. is not Death-and-destruction Central. Not only has the murder rate declined sharply in recently decades, but, in fact, we rank 99th in “intentional homicides” on a list of 191 nations—in the bottom 50 percent.

Moreover, there are countries with much stricter gun-control laws than the U.S. that nonetheless have higher murder rates, such as Mexico, Russia and Brazil. Other lands have high gun-ownership rates but low homicide levels; examples are Israel, New Zealand, Finland and Switzerland (which has among the world’s lowest murder rates).

In fact, “The crime rate, including the rate of crimes committed with guns, is far higher in Britain now,” continued Sowell, “than it was back in the days when there were few restrictions on Britons buying firearms.”

Yet there’s more. Gun ownership is far more prevalent in New Hampshire, Vermont and North Dakota than in the U.K., yet all three states have lower murder rates than Britain.

Gun ownership is also higher among Americans older than 50 than among those 18 to 29, yet the latter have a far higher homicide rate.

Of course, there is Japan, which has virtually nonexistent gun ownership and the world’s sixth-lowest murder rate (note: critics claim that due to the application of different criteria, Japan’s actual rate is twice the reported one). And one study indicated that things are, in fact, different with Japanese-descent citizens living in the gun-crazy U.S.

Their murder rate is half that of Japanese in Japan.

The reality? There simply is no correlation between stricter gun-control laws and lower murder rates. It doesn’t exist.

What correlation does? Some might have shrugged off a few of my earlier examples, saying, “Of course young people and city dwellers have higher homicide rates.” But that this is obvious gets at the point: “Guns are not the problem,” as Sowell opined, alluding to demographics.

“People are the problem…”

We see this across generations, too. In a 1785 letter, Thomas Jefferson advised his 15-year-old nephew that a gun should “be the constant companion of your walks.” For most of American history, boys were often taught to shoot while still children, and, frequently, “a youngster’s 12th or 14th birthday present was a shiny new .22-caliber rifle, given to him by his father,” wrote Professor Walter E. Williams in 2013. Oh, and admittedly, there was school shooting.

And for this purpose boys would often bring their rifles to school with them—even in N.Y.C.—on the subways. Yet school shootings (the news-making variety) were unheard of.

This history is generally forgotten, though, and today “zero tolerance” policies have seen schoolchildren punished just for pointing their fingers like a firearm in our “gun free zones.” It’s an example of how our gun debate has become a thought-free zone of puerile, passion-spawned policy.

Then there are the double standards and hypocrisy. Just consider what happened when Project Veritas undercover operatives, posing as anti-gun activists, approached pro-gun-control journalists and requested they take a stand for the “cause” and erect lawn signs stating “THIS HOME IS PROUDLY GUN FREE.”

Not only did every one decline the free sign, but one columnist actually said, “I am on your side on this, but I’m just wondering if that’s not an invitation to somebody with a gun!”

So, no, it’s not the guns, but the people—who don’t thus wonder before foisting on America’s children what they won’t even allow on their lawn. 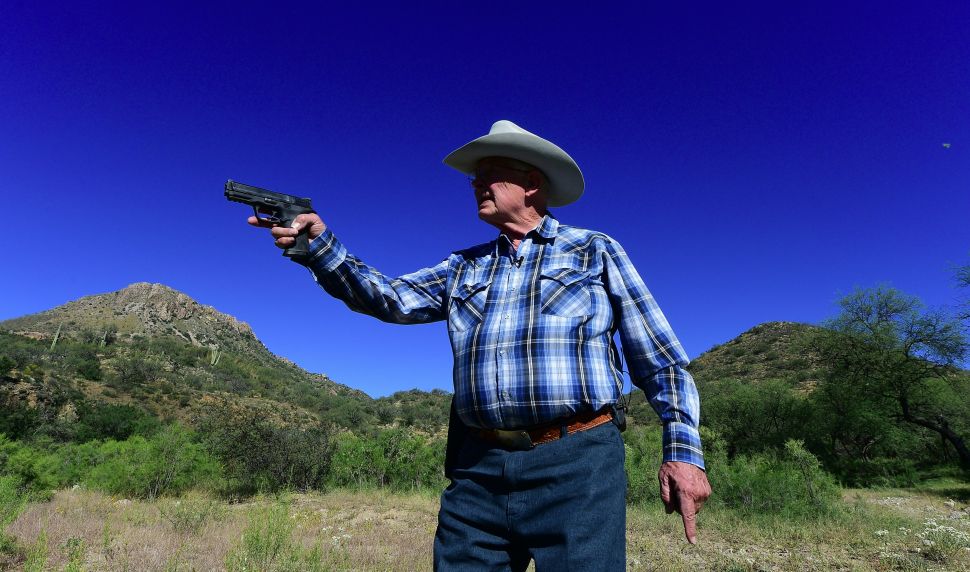