The dust on a mortifying but unsurprising defeat for Donald Trump and Paul Ryan still hasn’t settled. But in the fog, let’s look at a few new truths and some unexplored angles that illustrate both what’s right with politics (it turns out you need to be good at your job to win) and what’s wrong (branding too often equals accepted fact).

The reason it’s embarrassing is self-explanatory. This was a face-plant on a huge priority; a smashed promise to the base and something that was supposed to be easy to deliver. The reason it’s unsurprising is that, right under the surface, neither of the main players is very good at his job. And now it’s there for the whole world to see.

Two hollow myths, long past their expiration dates, are busted.

Just because he titled his 1980s book The Art of the Deal and just because he pukes up the words “closer,” “deal” and “dealmaker” ad nauseam while simultaneously jabbing in an “a-ok” motion doesn’t mean anything—especially in Washington. Crafting and shepherding massive legislation through Congress is very different from putting your name on some country club in suburban New Jersey.

What we’ve witnessed is the art of the squeal. The bottom line is that if a newly elected chief executive with a massive margin in the House can’t get his party’s signature, seven-year raison d’etre into law, he has questionable negotiating skills.

Enough narrative. We have got to stop being lazy. Ask questions. Don’t just write off the release. Look at Donald Trump’s actual deal-making. What was on and off the table? What were the stakes, and what did the man who now sits in the Oval Office give on—and what was nonnegotiable? With whom? Joan Rivers and Gary Busey? Omarosa? Some guy in a shiny suit in Queens? A Russian fertilizer magnate with close ties to Rosneft and Vladimir Putin (sorry, I’m getting ahead of myself)…?

Remember: Donald Trump is not a developer. He hasn’t built anything in decades. Keep this in mind when the President tries to sell his nebulous infrastructure bill. He’s licenser and a marketer. He mostly puts his name on things other people build. It’s a knockoff at best. Of course, this is not surprising to anybody who’s watched Donald Trump for more than five minutes and who digs more than an inch.

Second myth: Paul Ryan is not a wonk’s wonk, a policy genius, a budget master or a canny political operative.

In fact, to excel as Speaker, you need to master those arm-twisting skills. Memo to Paul Ryan: rip a page out of the Pelosi playbook. As Speaker, she delivered her caucus. And, not for nothing, last Friday, Nancy Pelosi sounded like Speaker and Paul Ryan sounded like Minority Leader.

But there’s a bigger point here, and it’s one of political leverage. Remember: a popular, in-control President can accomplish a great deal. He can push priorities that include members of Congress taking tough votes. That’s because a popular President can sweeten deals and offer support in other ways that are both a thank-you and a motivating mitigator for taking that tough vote. Come to the district. Raise money. Support a certain legislative priority that lets Congress member so-and-so do a presser at home in a hard hat.

But Donald Trump, less than three months in, is neither popular nor in control.

Bottom line: it’s going to be very hard for members of Congress to go to bat for a President with a 37 percent approval rating, a serious stability problem, and an FBI investigation. There’s no incentive—and, most importantly, no political cover.

If the White House and the Speaker hit the iceberg on something so politically crucial on their maiden voyage out, it’s going to be hard to get members onboard and ensure legislation stays afloat (see my Titanic metaphors?). The Freedom Caucus has no incentive to compromise. Mark Meadows won. And the suburban moderates, in whose districts majorities are made—23 of whose districts were won by Hillary Clinton—are freaking out.

Put it this way: Barbara Comstock, the quintessential swing-district Republican, is looking over her shoulder. And if all she sees are Trump and Ryan, she’s right to be nervous. 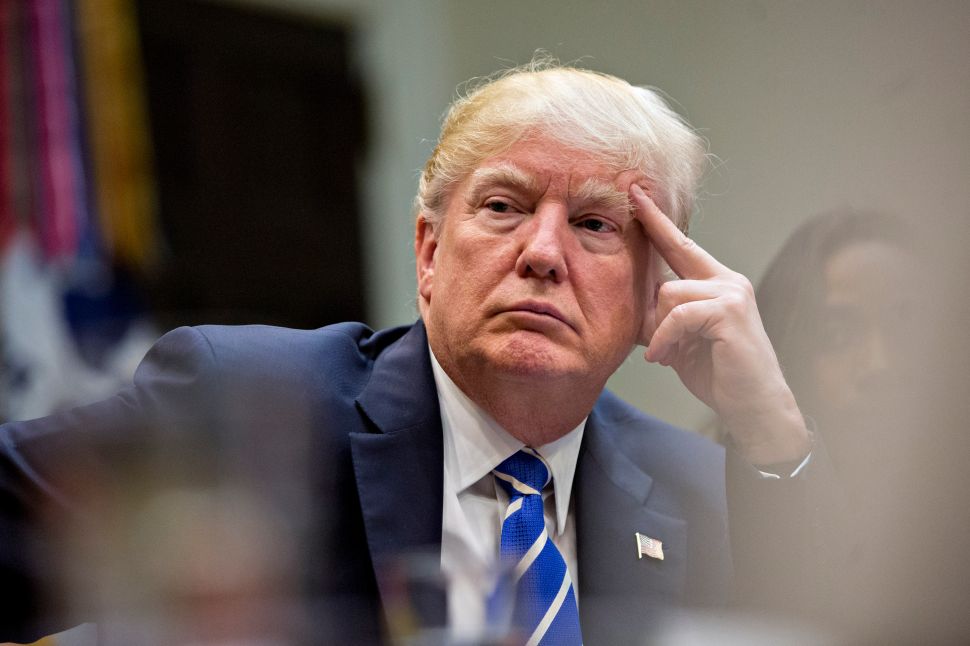