The threat to the West posed by Kremlin lies—what is properly termed disinformation—is something that I and a few other specialists have raised the alarm over for years. After 2016, when Moscow weaponized disinformation to influence our presidential election, this problem is finally getting the public attention it merits, not least because identical Russian espionage techniques are currently aimed at France and Germany, which have their own elections coming up.

The previous administration ignored this rising problem, shuttering a tiny State Department effort to counter Russian propaganda only months before the Kremlin lie machine went into overdrive against President Obama’s own party. As I’ve pointed out, Obama and his White House bear part of the blame for the Russian havoc wrought last year on Hillary Clinton and the Democratic National Committee, thanks to their abject unwillingness to confront Vladimir Putin. By refusing to seriously confront Kremlin disinformation and deception, President Obama got more of both.

Now this problem, which shows no signs of going away, has become even more dangerous, since the new administration has taken to parroting Russian disinformation when it suits their political needs. A propaganda loop has emerged with Kremlin lies emerging on Putin regime outlets like RT and Sputnik, then being pushed by far-right conspiracy websites such as Breitbart and InfoWars, and finally winding up on Fox News where they receive a mass audience.

President Donald Trump is part of that audience, and this disinformation cycle is what led to his infamous tweetstorm two weekends ago that plunged our politics into chaos over his unfounded allegation that his predecessor “wiretapped” Trump Tower. That narrative has now utterly imploded, having been denounced by numerous authorities—including the former Director of National Intelligence plus the House and Senate Intelligence Committees—while late last week British intelligence and the prime minister office joined the fray after the White House implied that London had spied on Trump Tower at Obama’s behest.

That unfounded accusation deserved the stern, unprecedented rebuke it got from our British spy “cousins,” which was backed up by the deputy director of the National Security Agency, Rick Ledgett. In a remarkable interview Ledgett described the allegation as “arrant nonsense…just crazy” while the whole idea demonstrated “a complete lack of understanding in how the relationship works” between NSA and GCHQ, its British counterpart. Furthermore, he went on, “It would be epically stupid” for GCHQ to have broken numerous laws to meddle in American politics.

No senior official of our Intelligence Community has ever spoken publicly in this fashion, implying the White House is dishonest and unhinged—but then, we’ve never had a commander-in-chief declare open war on our spies, terming them “very anti-American” and comparing them to Nazis. Ledgett’s candor may have something to do with the fact that he is retiring next month after a 40-year career in the spy business and feels free to “speak truth to power” as they say in the movies.

The question of where the president got the nutty idea that Obama “wiretapped” him therefore is important. Based on White House statements, Trump’s tweetstorm was inspired by comments made by Andrew Napolitano, a Fox News regular and former New Jersey judge with no background in anything relating to espionage. Notwithstanding Napolitano’s indulgence in weird conspiracy theories—he is a 9/11 truther who has pushed the idea that the Feds will enter your house to forcibly vaccinate you, additionally claiming that it was NSA, not the Russians, who hacked the Democrats last year—he was considered credible by Team Trump.

What, then, are the origins of Napolitano’s absurd accusation that Obama called on GCHQ to spy on Trump Tower, in both circumvention and violation of numerous British and American laws—which “the judge” asserted came from “three intelligence sources”? That these sources were bogus has been made clear by Fox News, with Shepard Smith offering a stunning on-air rebuke to its own talking head:

Fox News cannot confirm Judge Napolitano’s commentary. Fox News knows of no evidence of any kind that the now-president of the United States was surveilled at any time, in any way. Full stop.

A bit of digging has revealed that the main “intelligence source” for Napolitano’s dishonest claim was none other than Larry Johnson, a notorious figure in espionage and security circles. Johnson does possess a modest background in the Intelligence Community, working as CIA analyst for four years at the end of the Cold War, then serving as a counterterrorism official with the State Department from 1989 to 1993. He has been out of the intelligence business for a generation, and he has spent subsequent decades vehemently denouncing his former employers.

Johnson managed to get intermittent airtime for his denunciations of the IC, particularly in the realm of counterterrorism. He regularly castigated American officialdom for allegedly exploiting the issue for institutional benefit. Back in 2001, Johnson memorably accused Washington of inflating the “declining terrorist threat,” which left Americans “bedeviled by fantasies of terrorism”—exactly two months before 9/11.

After that, Johnson had difficulty getting mainstream attention for his big ideas, so he moved into fringe political commentary. In 2008, he went after Barack Obama with gusto on his website, asserting based on “four sources (three who are close to senior Republicans) that there is video dynamite—Michelle Obama railing against ‘whitey’ at Jeremiah Wright’s church.” Almost a decade later, no such tape has emerged, and after that debacle Johnson was deemed a complete pariah.

He then headed where angry failures in the West go when they are shut out of even fringe outlets at home: the Kremlin. Johnson reinvented himself as a regular on RT, Putin’s propaganda network, finding a home among the stable of freaks and rejects who get airtime on Moscow’s outlet. Since RT features avowed neo-Nazis and even an Illuminati correspondent as regulars, it can’t be said that Johnson is their most outlandish talking head.

On Putin’s dime, Johnson has denounced American spies at every opportunity, unmasking nefarious IC plots and assassinations which others have not been able to detect. In recent months, he has towed the Putin-and-Trump line on RT, spinning conspiracy theories about the downfall of Mike Flynn, the president’s ill-fated first National Security Advisor. Johnson also went on RT to denounce the IC’s conclusion that Russian operatives were behind the hacking of the Democrats in 2016.

Significantly, on March 5—the day after the president unleashed his “wiretapping” tweetstorm—Johnson went on RT to float his latest conspiracy theory, that President Obama illegally monitored Donald Trump and his entourage last year, co-opting IC leadership in secret efforts to derail the Republican nominee. On air, Johnson explicitly pointed the finger at British intelligence in this plot, repeatedly referring to GCHQ as the alleged culprit—though he laughably kept calling it “GHCQ.”

This, then, is the origin of the fact-free assertion that the Brits spied on Trump for Obama: a perfect example of the RT to Fox News to White House chain of lies. In other words, this was unfettered Kremlin disinformation, proffered by a notorious crank in Putin’s service. Johnson subsequently spoke to The New York Times, at Napolitano’s request, admitting he was the source for the “bombshell” story, asserting that the information came from unnamed IC officials.

These mysterious officials, if they exist—and, given Johnson’s track record, there’s no reason to think they do—have no idea what they’re talking about. The president’s “wiretapping” hoax has generated the strongest public denials and denunciations ever recorded in the annals of both British and American intelligence.

None of this seems to have registered with the president. During his painful-to-watch press conference on Friday with Angela Merkel, the German chancellor, Trump brushed off questions about his tweetstorm by dumping the matter on Fox News, notwithstanding the fact that Sean Spicer, the president’s spokesman, read Napolitano’s accusation against GCHQ verbatim from the White House podium:

Since Fox News has admitted it cannot substantiate Napolitano’s claims, one wonders where that leaves the president and his tweets. Trump indicated that he stands by his “wiretapping” claim since during the presser he joked, “At least we have something in common, perhaps,” referring to allegations that NSA intercepted Chancellor Merkel’s phone calls, too.

This issue has become a millstone around the White House’s neck, sucking all the oxygen out of the room. It’s difficult to see how the administration will get much of anything done with Congress as long as President Trump refuses to admit he made a mistake. Increasing numbers of Republicans on Capitol Hill are frustrated with the White House and its bizarre refusal to back away from an obviously false story which emanates from Moscow.

Leading Congressional Republicans now are distancing themselves from Trump, and Rep. Tom Cole, an Oklahoma Republican, has stated that the president owes his predecessor an apology for sticking by such an ugly lie. Even Trump backers in the media are admitting that the president needs to walk himself and his administration away from this self-created debacle, offering helpful suggestions how the White House can extricate itself from the “wiretapping” quicksand.

However, the president so far shows no signs of backing down—much less away. For all their denunciations of “fake news,” the White House has become a leading purveyor of it. As long as Trump sticks with his ridiculous story, the country will keep talking about a piece of Kremlin disinformation which has become the number-one story in Washington and across America—precisely as Moscow intended. 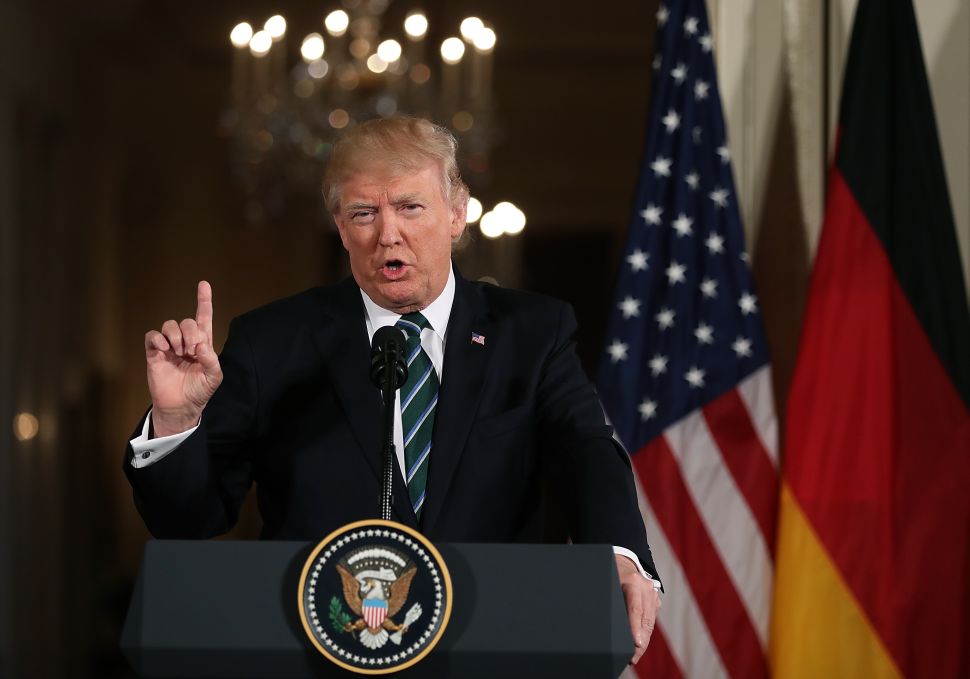