The first time I ever talked to a cam girl, I did it in a room full of people, at a party sponsored by CAM4VR. Partygoers took turns with an Oculus Rift to look at and talk to a cam girl named Layla Savage. Verbal communication with performers was the company’s big reveal for the festival. That feature will go live in the next quarter.

During my own facetime with Savage, wherever I pointed my eyes in the virtual reality experience was broadcast onto a giant flat screen TV in front of me, so everyone else at the shindig was privy to whatever caught my attention.

We were all trying it out at the W Hotel’s bar during this year’s SXSW festival in Austin. The hotel wouldn’t let the performer get any sexier than a tank top and shorts, but I wouldn’t have had the nerve to go further in a room full of strangers anyway. The system I was using allowed me to talk to Savage directly, in my own voice. She told me folks found her “electric.” She had dark, super straight hair and maybe a sort of Aubrey Plaza thing going, without the terrifying demeanor.

Turning all the way around with the headset on, I found she had a sword hanging on her wall. She also had one propped next to her night stand. She unsheathed one for me and I suppose that’s as close as we got to anything even metaphorically titillating. Brandishing her blade, she told me that sometimes she works as a bodyguard. I don’t know if I believe her, but I don’t think all the facts need to line up with reality for a camming experience to be authentic. And maybe she does?

What threw me off while talking to her was that I quickly forgot that I was only a disembodied voice on her end. I thought at least she would be able to see some kind of icon floating in space like they do in other social VR experiences, but then I had to remember that I was the only one having a digital experience. Savage was just hanging out in her room, acting cute and talking back if she heard a voice. She couldn’t see me or even an avatar of me.

If I looked right at her and it felt to me as though we were making eye contact, she had no idea, but it did feel that way sometimes.

‘You can’t pirate a human connection’

She couldn’t talk about a lot of what makes their hardware and software special, but she gave one specific example. Their adult-ready VR camera has a convergence point on the  a lot closer than it is on the typical VR camera.

The convergence point is the distance at which your vision starts to blur because it’s too close. On a mainstream VR rig, it’s a meter out, which makes sense because people use them to film scenes, panoramas, things that give a sense of vastness. The team came to SXSW in part because they wanted to show off their more intimate camera.

Folks had already moved heavily to these live, digital encounters, but Darling’s young company had the additional challenge of building the product so it could work alongside a traditional webcam setup. “I couldn’t ask performers to give up their existing clients for a nonexistent user base,” she said. Usually, when people cam, they just work from one traditional camera that they have to adjust themselves to provide different points of view.

The user base is now less of an issue. By partnering with CAM4, Darling’s VR camming setup got access to a huge network of customers and performers. In fact, folks without VR rigs can still have a 360 experience by mousing around on the screen like they do on YouTube 360. When those 2D customers get around to getting a headset, they can go immersive.

Even in my PG conversation with Savage, you could see how that was true. I looked around the room and started asking her about what I saw. The poster on the wall. The sword in its scabbard in the corner. Later, I saw her cat come in while someone else talked to her. You can’t plan for that stuff, and its realness makes it easy to suspend your disbelief and think she can actually see you. You can even take it a step further and pretend that you’re the sort of guy she’d love to be talking to.

Right now, visitors to CAM4VR users type out messages using speech-to-text. After full duplex voice goes live, Cam4 will work on private sessions and then whatever else the community might like next.

Darling’s no stranger to traditional camming. She’s done it off and on for seven years. One feature a lot of users like is cam-to-cam experiences, where the cam girl can see her client, just as they can see her.

Obviously, a camera on someone doing VR would show a person with a rig covering most of his head, but Darling said, “To be honest, most of the time they don’t point the cameras at their faces.” 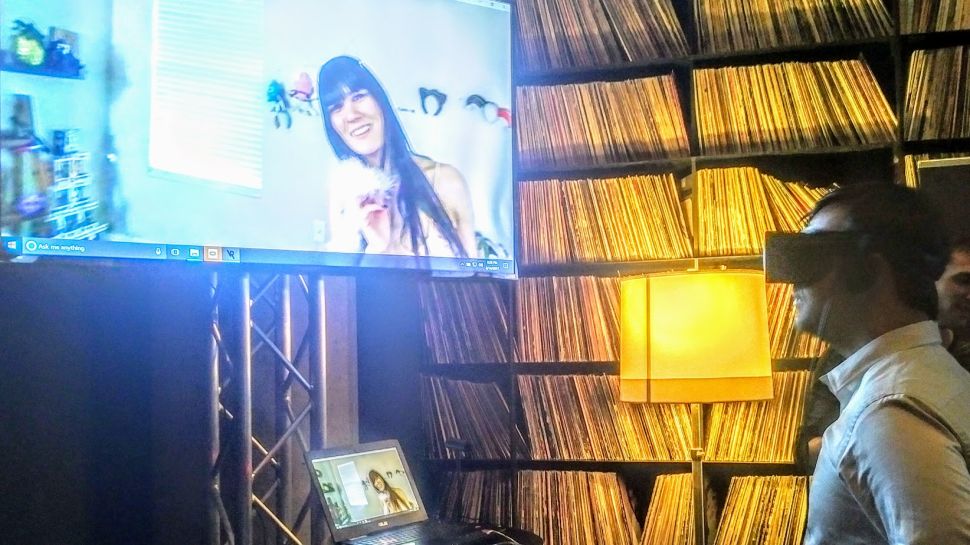