Monday’s marathon Congressional session about Moscow’s clandestine machinations during our 2016 election was one for the books. The directors of the FBI and NSA hardly ever speak jointly in open session, so this was a truly special event, and what they had to say rocked American politics.

Together, the FBI’s James Comey and NSA’s Mike Rogers made it abundantly clear to the House Intelligence Committee that Russian spies interfered in last year’s presidential campaign, to the detriment of Hillary Clinton and the benefit of Donald Trump. Moreover, the new president and his team are under FBI counterintelligence investigation, and have been since last summer, in an inquiry that’s attempting to get to the bottom of this unpleasant mess—including assessing if there was any clandestine collusion between the Kremlin and Team Trump.

Just as stunning was the admission by Director Comey, speaking for both the Bureau and the Department of Justice, that the president’s tweetstorm accusation that Barack Obama “wiretapped” Trump Tower is nonsense. Nobody in the Intelligence Community has found a shred of evidence to support Trump’s outlandish claim, while Director Rogers explained that NSA’s British partner agency, GCHQ, was not involved in any surveillance of Team Trump—another bizarre accusation the White House backed, notwithstanding that such conspiracy-theorizing is of Russian origin.

As has become the norm, the White House dug in its heels, ignoring all evidence they didn’t like. Even Fox News has walked away from the GCHQ-did-it lie which they aired earlier this month, benching the longtime conspiracy monger who put this Kremlin disinformation on-air in the first place.

House Republican efforts during Monday’s session to redirect, forcing Comey and Rogers to discuss the leaks of classified information that put Team Trump’s odd ties to the Kremlin on the front pages—rather than the substance of those ties, which the White House has gone to great lengths to downplay and deny—didn’t work. No amount of obfuscation can hide the reality that the president is a habitual fantasist who is under FBI investigation over his links to Moscow. Since this was the bland, unclassified version of our Intelligence Community’s assessment of the situation the White House is in, the mind boggles at what the top-secret version must say.

Nevertheless, the most interesting statement made by Director Comey on Monday concerned what exactly the Russians were up to in 2016. “They were unusually loud in their intervention,” Comey said when asked by Florida Republican Rep. Ileana Ros-Lehtinen about novel Kremlin spy machinations last year during our election campaign: “It’s almost as if they didn’t care that we knew.”

It’s an important fact that, when Moscow dispatched hackers to pillage Democratic emails last June, they employed groups that were already well known to Western security services as fronts for Kremlin spy agencies. Subtle, this was not. Someone in Moscow—presumably Vladimir Putin—wanted us to know who was doing the dirty work.

Just as unsubtle was the Kremlin’s use of Wikileaks to disseminate those purloined emails to hurt Democrats. Since Wikileaks has served as a front for Russian intelligence since at least mid-2013—as was glaringly obvious to anyone acquainted with Kremlin espionage and propaganda techniques—here, too, someone at the top in Moscow wanted us to be aware of who was pulling the strings.

At every stage of their secret operation to influence our 2016 election, Russian spymasters could have used more subtle methods—for instance employing clean hackers who were unknown to Western counterspies or putting stolen emails online on a fresh new website—yet chose not to. This smacks of bravado and more than a little confidence that Washington would do little if anything to push back against Moscow—an assessment that proved sadly accurate.

To be fair to Putin, why would he not feel confident that he could get away with his brazen spy-game? He took the measure of Barack Obama and saw a man he could push around, so he did. Moreover, the Kremlin managed to convince millions of gullible Americans that the thief and defector Edward Snowden, who has lived in Russia since mid-2013 under the protection of Putin’s thuggish FSB, is actually an American patriot and defender of civil liberties. People dumb enough to buy that Moscow lie might fall for anything Putin threw out there, no matter how absurd.

It bears noting that back in the 1970s, the KGB (that a young Vladimir Putin joined right out of college) was a good deal subtler than it is today. Take the case of Philip Agee, the Snowden-before-Snowden, a disgruntled former CIA officer who went public with accusations of American intelligence malfeasance. Starting in 1975, Agee published three books which exposed CIA operations around the world, including identifying undercover Agency officers in numerous countries. After these compromises, which Langley believed led to the murder of the CIA station chief in Athens in late 1975, Congress made it a Federal crime to reveal the identity of American spies working in cover status.

Agee instantly became a celebrity and icon to the worldwide anti-American Left and remained an active critic of Western intelligence down to his death in Havana in 2008. His thick, detailed books were classic disinformation, an explosive amalgam of fact and salacious fantasy designed to discredit the CIA—which can be attributed to the fact that Agee’s books were written by Cuban and Soviet intelligence.

As we learned from secret KGB archives after the Cold War, Agee walked into the Soviet embassy in Mexico City in 1973, five years after he left the CIA under a cloud, and offered his services. Cautious in such matters, the KGB turned him away, fearing that Agee, who seemed too good to be true, was an American dangle. Less risk-averse and more eager to hurt Washington, Cuban intelligence proved more welcoming, and Castro’s spies greeted Agee with open arms. They viewed the turncoat as a goldmine for propaganda about CIA activities in Latin America. The KGB eventually got involved too, using Agee to disseminate anti-American agitprop worldwide—information that was really penned by KGB disinformation experts.

Throughout this long-term operation, which gave the CIA a seriously bloody nose, Moscow was careful to mask its role in the affair. The KGB always kept their witting agent Agee at arm’s length, knowing that if the Kremlin’s clandestine role behind this stage-managed drama became known in the West, it would discredit Agee’s accusations in the public eye.

Today, the Western public is more credulous than it was during the Cold War, since Putin’s spies have shown no such caution in their handling of the Snowden affair. They allowed Snowden to defect directly to Moscow in June 2013, which showed the Kremlin’s hand at the outset, only a few weeks after the NSA IT system administrator went public with his explosive allegations against his former employer. Since his arrival in Russia, Snowden has cooperated with Putin’s spies—just like every other defector ever, anywhere—as even top Kremlin security officials have publicly admitted. Given how eagerly many Americans accepted such blatant Moscow fairytales as truth, nobody should be shocked that Putin intervened in our 2016 election in such a nakedly brazen fashion.

Yet Putin’s boastful unwillingness to hide his aggressive spy-game against American democracy was ultimately unwise. Monday’s Congressional testimony makes it clear that our Intelligence Community is fully aware of what the Kremlin was up to in 2016—and that their far-reaching investigation into Russian interference will eventually go public.

Director Comey was correct in asserting that we’ve hardly seen the last of such nasty Kremlin efforts to subvert our politics:

They’ll be back in 2020, they may be back in 2018, and one of the lessons they may draw from this is that they were successful because they introduced chaos and division and discord and sowed doubt about the nature of this amazing country of ours and our democratic process.

Henceforth, however, the Russians will not enjoy the free hand they had in 2016. Many Americans are now wise to Kremlin disinformation and its noxious impact on democracy, while Democrats in Washington today exhibit a passion about countering Kremlin spies-and-lies which their party hasn’t displayed since the 1950s.

Reports that FBI counterintelligence is investigating far-right websites—including White House favorites Breitbart and InfoWars—to determine if they aided clandestine Russian efforts to boost Trump last year indicate how much the game has changed. The Kremlin-driven fringe-to-mainstream disinformation chain is now getting the scrutiny it deserves.

This turns of events reflects the purest Putinism, a conspiratorial worldview which emphasizes cunning tactics, not long-term strategy. Russia’s leader learned this during his KGB career, and Putin is a stereotypical Kremlin secret policeman—what Russians call a Chekist. Recent Russian espionage and propaganda operations against America, from the Snowden Operation to the campaign to sink Hillary Clinton, displayed impressive tradecraft, yet seemingly gave little thought to lasting political consequences.

By brazenly assaulting American democracy, the Kremlin generated serious pushback in Washington and beyond. Russia seeks to employ the identical spies-and-lies playbook against France and Germany now, since they have elections coming up. Yet Putin’s cover has been blown and European media and politicians are now discussing this threat seriously for the first time.

To say nothing of the fact that Donald Trump’s electoral victory, which nobody in Moscow seems to have anticipated, brought Russian espionage into scrutiny in Washington not seen since the early days of the Cold War. That the new president, whom Moscow hoped would turn American policy towards Russia, is instead facing an FBI counterintelligence investigation into how he landed in the White House demonstrates the perils of short-term Chekist thinking. 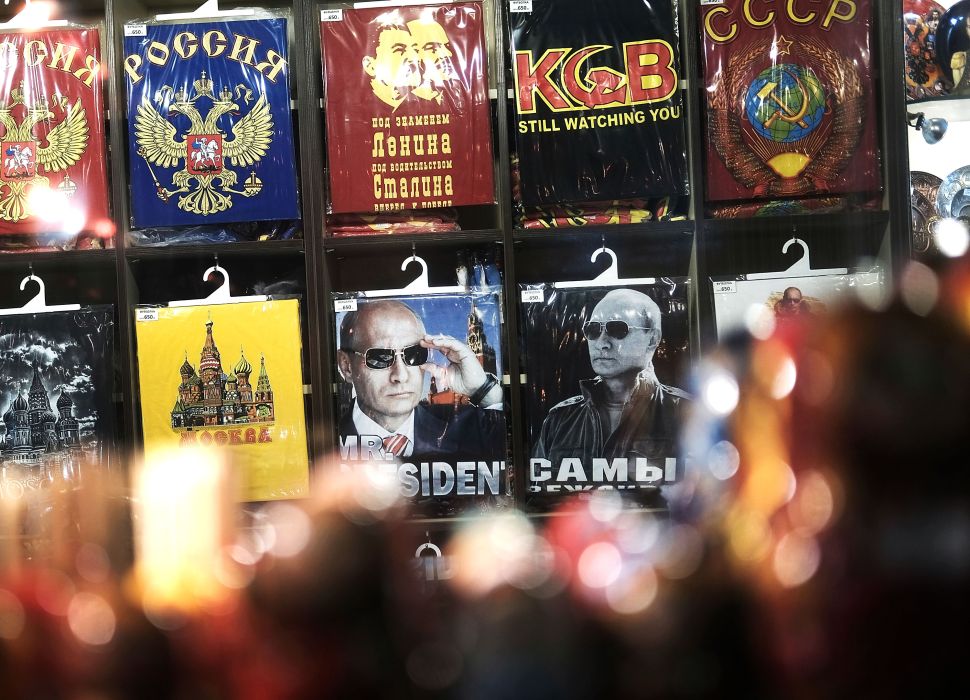