The second episode of Feud opens with a young blonde fellow member of the cast of What Ever Happened to Baby Jane? innocently and completely inadvertently insulting Joan Crawford’s age to her face. Horror movie music plays as Crawford glares at her and cocks her head back and forth for what feels like half an hour. So apparently now Joan Crawford is feuding with this woman, too.

Crawford tries to form an uneasy truce with Bette Davis to get the young blonde woman fired from the movie. It’s not 100 percent clear why. The scene hilariously ends with Crawford either complimenting or insulting Davis — it’s impossible to tell which. Anyway, Davis agrees to go along with the ‘fire the young blonde woman’ plan because they think the film’s director Aldrich will try to sleep with her. I guess? Aldrich agrees to fire her. This all happens in the first five minutes. Once again, it is time to Feud.

Kathy Bates in the late ‘70s catches up on some background surrounding the origin of Crawford’s and Davis’ feud. It mainly involves Jack Warner (Stanley Tucci) playing them off each other.

Meanwhile back in present day, on and off the set Crawford and Davis seem to finally be getting along, much to everyone’s (especially Hedda’s) surprise. The feud is over I guess. That’s the end of the show, everybody! Alas, it is not to be. Jack Warner asks Aldrich to try to keep the Crawford-Davis feud going because it’ll be good for publicity. Aldrich is torn about doing this, but Hollywood is strange, and whaddya gonna do? So Aldrich runs to Hedda and tells her that Crawford’s breasts are fake. The source of this gossip is then of course attributed to Bette Davis. Hollywood is so strange. The feud is back on.

Crawford gets “back” at Davis by telling another gossip columnist that she thinks Davis looks really old. Davis isn’t wild about this. They have a big fight and threaten each other. Aldrich agrees to help Davis with her scenes over the weekend. They begin to form what appears to be a sincere camaraderie and this pisses Crawford off. So Crawford pulls Aldrich away from his wife in the middle of the night and confronts him about sleeping with Davis, which he swears he isn’t. Crawford tries to seduce Aldrich, but then Crawford’s husband shows up unexpectedly. Crawford gets pissed at her husband for whatever reason and decided to kick him out. All of this actually happened exactly as I described it and I understood maybe 20 percent of it.

Bette Davis watches her daughter B.D. flirt with a bunch of guys on the set of What Ever Happened To Baby Jane? which leads to a big blowout fight between the two wherein B.D. tears into her mom’s age and declining stature in Hollywood. Susan Sarandon’s face is genuinely hard to watch during this scene.

It’s now Bette Davis’ turn to call Aldrich in the middle of the night. The episode ends with Davis and Aldrich sharing drinks and cheering each other up. It’s all very innocent and sweet. And then they have sex. Oh well.

This was an odd and confounding episode of television, beginning to end. I can’t wait for next week.

READ NEXT: ‘Feud Star Alison Wright Will Not Be Underestimated‘ 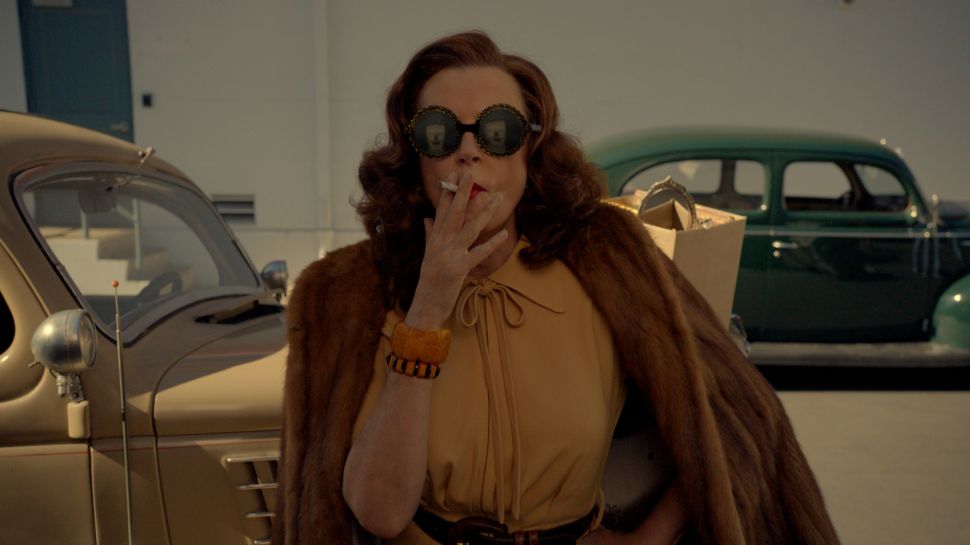