Episode four of Feud opens with Davis and Crawford being met, in several humiliating ways, with the news that the early buzz about What Ever Happened to Baby Jane? is extremely bad. We get to see Jessica Lange deliver a truly wonderful “fuck you” to the head of William Morris before firing the entire agency. It occurs to me I’ve yet to mention how great Feud’s title sequence is. It’s really great. And we’re off!

Rumors about how horrible What Ever Happened to Baby Jane? turned out abound throughout Hollywood. Even Aldrich has no idea if the movie is any good, and he directed the thing. Alfred Molina is so good in this show. Aldrich’s assistant Pauline wants to get Joan Crawford on board with a new film production — so she goes to Mamacita with the ask, knowing she has Crawford’s ear. Here’s the catch: Pauline wrote the script and wants to direct it. Mamacita is all about it.

Crawford again brings up Pepsi while talking about the film. The ongoing Pepsi thing is the true unsung hero of Feud and I eagerly await the master-cut on YouTube of every Pepsi mention after this series is over. I’ll watch it every day. Mamacita pitches Pauline’s script to Crawford, who isn’t wild about the idea of a female director.

Much to the surprise of Aldrich and Crawford, a preview of What Ever Happened to Baby Jane? goes surprisingly well — even yielding a standing ovation. Crawford basks in all the attention from the audience, and after watching bad thing after bad thing befall everyone on this show, it’s refreshing to behold. The movie is a surprise hit! Everything’s going great. Of course, this cannot last.

Crawford’s upset about the accolades Davis is receiving for her performance. Jack Warner wants Aldrich to basically just keep making What Ever Happened to Baby Jane? over and over again, but Aldrich is eager to branch out beyond horror. Pauline is keen on getting Crawford on board the movie she wrote and plans to direct. Crawford shuts her down with a good monologue about the waning influence of women in Hollywood with the advent of major studios and big money. She also calls Pauline a “nobody.” I vaguely recall when Feud was a happy place to be just a few scenes ago, but that memory is quickly fading.

Davis goes on tour to promote the film, which Crawford is not interested in. There’s finally a scene of Crawford and Davis feuding once again. The feud is back on. Pauline pitches Aldrich on directing the script she wrote. Aldrich thinks this is a good idea, and thank goodness. I could not stand seeing Pauline get rejected once again.

Aldrich and Frank Sinatra (Toby Huss) have a conversation on a golf course that is boring and confusing. This carries over to Sinatra and Aldrich filming a scene together. Sinatra blows up at Aldrich, and all of this is the strangest deviation that Feud has taken so far. Jack Warner braces Aldrich for potentially failing to get an Oscar nomination for What Ever Happened to Baby Jane? by horribly insulting Aldrich in a way that’s somehow simultaneously explicit and passive-aggressive. Jack Warner is a real piece of work.

As if all of this weren’t bad enough, Aldrich dresses down Pauline and tells her that nobody wants a woman director after all. This is an unbelievably cruel show. Mamacita cheers Pauline up by crunching some numbers and deducing women will soon outnumber men, population-wise, and Hollywood will have no choice but to produce more films by women, for women. This doesn’t make up for how Aldrich treated Pauline, but oh well.

The episode ends with Mamacita presumably breaking the news to Crawford that she didn’t receive an Oscar nomination (and Davis did) and then Crawford screams at the top of her lungs and then roll credits. Gee-wiz!

This was a depressing hour of television, no question. Brief glimpses of hope were systematically extinguished over and over again. It was unpleasant to watch. Lange, Sarandon, and Molina are all still excellent, however. The feud must go on. 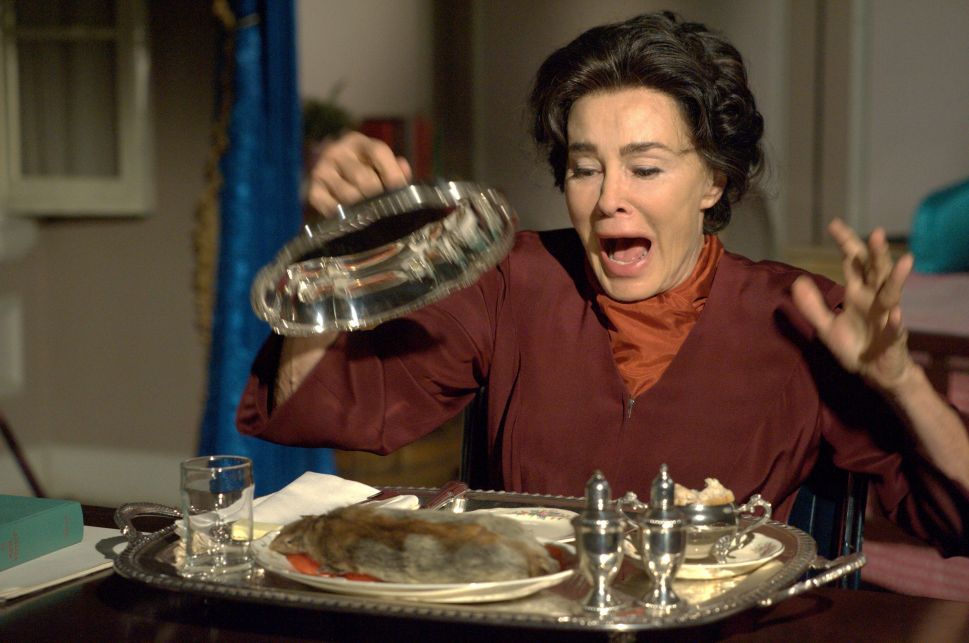