With its quasi-farcical cross-dressing plot and (at times) virtually unsingable music, Fidelio is never an easy piece to put over. The Met’s current presentation of the 1814 opera, further hobbled by uneven casting, mousy conducting and a downright bewildering staging, finally has little but Beethoven’s thorny, magnificent score to recommend it.

So glorious is that score, though, that you can’t help resenting what seems like laziness on the part of the Met in presenting this piece. Conductor Sebastian Weigle took few risks, favoring quick, springy tempos that robbed the music of gravitas. The only excerpt that really took the breath away was the Prisoners’ Chorus, performed with ideal legato and seemingly infinite dynamic gradations by the men of the Met chorus.

So rapt was their singing, in fact, that it momentarily masked one of the greatest absurdities of Jürgen Flimm’s 2000 production. In this scene, 40 or so political prisoners are released from their cells to enjoy the sunlight. But these surely must be the politest convicts ever. The unguarded courtyard into which they are released offers food, drink, a young woman in a red dress and open cases of semiautomatic weapons, all within arm’s reach—and yet they timidly arrange themselves into a tableau in their spotless white uniforms, sing their song and then, without the slightest demur, return to their dank captivity.

Elsewhere Flimm saddled his soloists with so much pointless and fussy business they hardly had time to glance at Weigle’s listless baton. Particularly flustered was soprano Adrianne Pieczonka as Leonore, the woman who cross-dresses to infiltrate the prison where her husband is being incarcerated without charge. She was so distacted with rummaging in her backpack (and then repacking the thing) that she seemed unable to find the pitches for her great aria “Abscheulicher!”

It wasn’t all Flimm’s fault though. Despite elegant German diction and a warm, enveloping voice, Pieczonka just isn’t the heroic type. You can imagine her perhaps writing an eloquent letter to the editor, but pulling a gun on the prison warden, no.

One true bright spot, even in the extremely gloomy prison cell set for act two, was tenor Klaus Florian Vogt as Leonore’s oppressed husband Florestan. True, his voice is unconventional, more like a huge Tamino sound, bright and youthful, than the dark, muscular heroic tenors traditionally associated with this part.

But his sound is absolutely true and at least as penetrating as any other in this cast, a sweet and even innocent tone suggesting the beauty and purity of Florestan’s beliefs. Usually finale of this opera depicts the rescue of a great but flesh-and-blood man; when Vogt stepped forth into the sunlight, it seemed a rebirth of the human spirit.

That sense of lofty triumph was helped along mightily by Günther Groissböck as the king’s minister Don Fernando, noble singing as a symbol of nobility of political action. With his sumptuous bass giving the orders, the opera’s joyous denouement—prison doors thrown open, families reunited—felt, at least for the moment, like something more than a fairy tale. 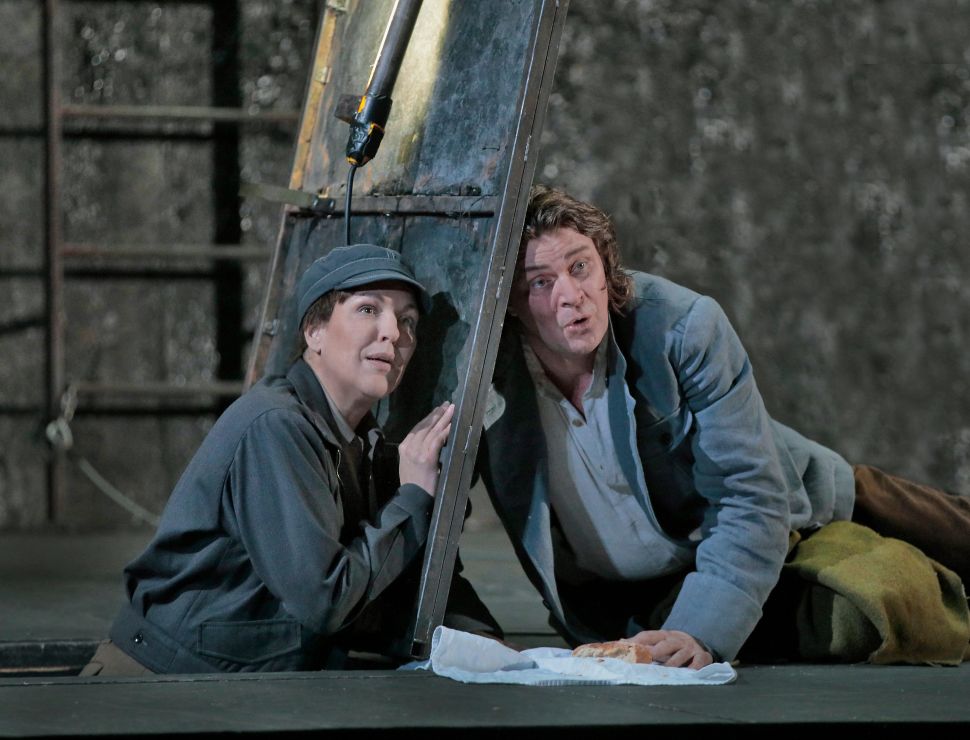