You could hardly miss the Michael Flynn story Thursday night—unless you get your so-called “news” from Fox’s so-called “News” Channel. And if you are that narrow and unaware, you might be as addled as amateur President Donald Trump.

After The Wall Street Journal broke the Flynn Flip story on its web site in the early evening, The New York Times and The Washington Post confirmed it and posted their versions.

In prime time, on the cable news channels, MSNBC featured it on All In with Chris Hayes, The Rachel Maddow Show and The Last Word with Lawrence O’Donnell, with Joy Reid subbing as host.

On CNN, the story was thoroughly reported by Anderson Cooper and Don Lemon—and discussed by their casts of panelists—in two-hour blocks beginning at 8 p.m.

All accurately said Flynn, Trump’s former national security advisor, offered to testify to the FBI and two Congressional intelligence committees. All he wants is immunity.

“General Flynn certainly has a story to tell,” his lawyer said.

All three groups are investigating, among other things, allegations that Trump associates had contact with Russians trying to interfere with last year’s American presidential election.

However, if you watched only Fox in prime time Thursday, you had few clues as to the major story of the news cycle.

Instead, you saw only the usual canned, stale pap from the Long Island Bully Boys, Bill O’Reilly and Sean Hannity, and willful ignorance from snotty frat boy Tucker Carlson, the only prime-time Fox host who does a live show and doesn’t knock off early from work.

In that this story damaged the Trump administration, Carlson ducked it as well as he could. After another ritualistic taunting and baiting of a scholar (Tucker Takes On Radical Professor), Carlson read a brief item about Flynn in the 22nd minute of the 9 p.m. hour.

The item mentioned the headline of the Journal story and Carlson added “Michael Flynn appears to have gone completely off the deep end.” All of this lasted about 15 seconds. Then Carlson dutifully changed the topic to “sanctuary cities,” always in heavy rotation on Fox.

Later, he brought up those rape charges against those two undocumented immigrants in Maryland. Fox loves this story. It supports Trump’s nativist agenda. In fact, fear of immigrants dominated The O’Reilly Factor, Tucker Carlson Tonight and Hannity.

Little was heard from Fox about the Times story from the afternoon that identified the White House personnel who let Devin Nunes see secret intelligence that, Nunes hinted, favored Trump.

This was convenient for all concerned because Nunes—a California Republican—is the chairman of the House Intelligence Committee that is investigating Trump’s cronies for ties with the Russians. Nunes already knows them, of course, because he worked on the Trump campaign. Small world.

Back then, the Russians wanted Trump to defeat Hillary Clinton. He did. Now, Trump speaks highly of them and their president, Vladimir Putin. Trump also denies that he has financial obligations in Russia and has said often that allegations that Russia has leverage over him are “fake news.”

Speaking of such things, one true fact that Hannity did report was this quote from Trump-buddy Putin. Hannity even showed a video clip of the Russian strongman. Somebody asked Putin about allegations that he interfered in the U.S. election.

But this wasn’t the funniest sound bite of the night. That came on Maddow’s show when she showed a clip of Flynn from last year, when he was on Turkey’s payroll as a secret agent while helping Trump’s campaign and listening to sensitive American intelligence briefings.

“When you are given immunity,” Flynn said then, “that means that you’ve probably committed a crime.”

But the real money quote of the night came not on Thursday but early in February, right before Trump forced Flynn to quit for lying to Vice-President Mike Pence about talking to the Russian ambassador about American sanctions against Russia.

“You cut him loose, Mr. President, you solve one problem right now,” Begala said. “But you create a huge problem because he’s going to turn on you. He may very well have a lot of information that people want to hear. And he will no longer be protected by executive privilege.” 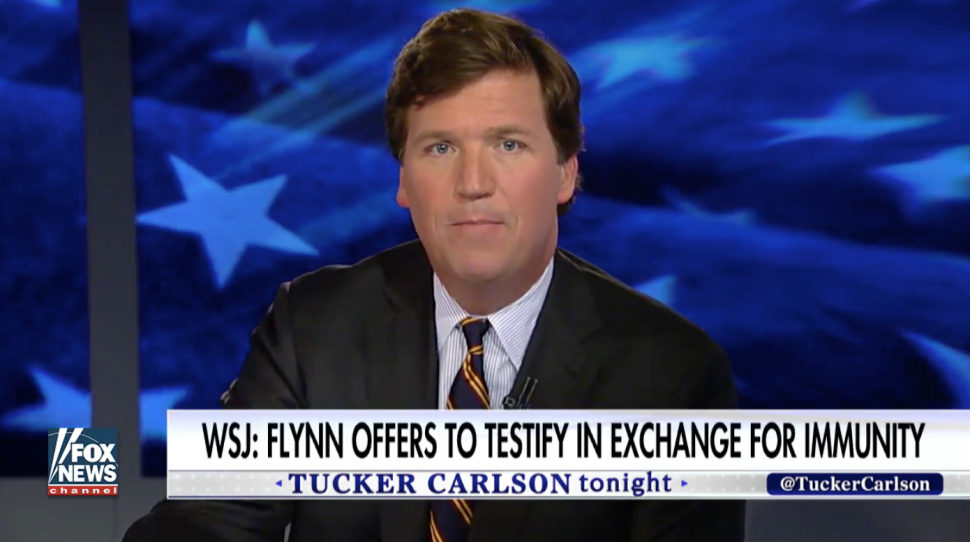