It doesn’t matter if you are or are not a Game of Thrones fan, you’ve absolutely heard the show’s epic theme song played somewhere, at some point. It’s a sweeping melody of violins and beating drums that build to a furious crescendo, and it would inspire even the least rhythmically gifted of us to do a flailing interpretive dance or perhaps challenge a sibling to a duel over inheritance rights. Last night at Madison Square Garden, more than 16,000 fans erupted with screaming unadulterated joy as GOT composer Ramin Djawadi’s orchestra played the song’s first notes, the Iron Throne slowly rose up through the stage in a cloud of sparks and smoke, and the map of Westeros blazed across the jumbotron. Welcome to the Game of Thrones Live Concert Experience, a Cirque de Soleil-style concert sans acrobatics and plus wildfire pyrotechnics that is the closest thing we’re going to get to Season 7 until the show returns later this year. And I can say with confidence, while winter couldn’t arrive faster for this diehard fan, for the time being I feel as though a void has been filled.

Arriving at the Garden for any event is always an anxiety-inducing production. The crush from Penn Station into the narrow entrances of New York’s grandest venue is a dehumanizing indignity, but something about being sandwiched between a teenager dressed in full Night’s Watch Ranger regalia (maybe Benjen Stark?) and a man of near-40 dressed as Joffrey Baratheon made the experience tolerable—no, delightful. The usual cosplayer crowd was sparse, and there wasn’t a Khaleesi in sight, much to my dismay because I’ve recently gone platinum blonde and was relishing the chance to look the part without even trying. I made a point of hitting the merchandise table first (I wasn’t going home empty-handed) and discovered that as hungry as GOT fans are for spoilers so goes for concert tees—nearly everything was sold out before the show even started. And upon closer inspection of the apparel offerings, I noticed that several fans I’d encountered in the security line outside were already donning tour shirts with the phrase “Music is Coming.” Could the Game of Thrones Live Experience have groupies? How else could a fellow concertgoer have come so readily prepared?

Up three escalators, and past the food vendors, fans lined-up in front of green screens to take photos of themselves in some GOT-themed virtual set-up, and couples hurried hand-in-hand, beers in tow into the arena. The stage was an impressive sight: a double-sided jumbtron flanked by two hanging towers of additional screens, over two stages connected by a long runway and several large pedestals for soloists draped in gold. Those willing to pay VIP prices sat on the stage floor, either in seats right beneath the orchestra or tables adorned with various family crests such as Stark, Lannister or Greyjoy. And while those seats certainly put viewers in the center of the action, they bore the brunt of the show’s immersive special effects, which included showers of snow, fire, smoke and falling leaves.

The lights dimmed and the orchestra started a deep, rolling beat from its percussion section. The center of the stage opened up and colorful storm of clouds swirled and blew across the screens. Sparks accompanied by the pangs of clashing metal flew up from the pit, and as the Iron Throne rose up the crowd began to rumble. Nothing, except the show’s music itself, evokes a more rapturous response from fans than the mere sight of the Throne, and one woman couldn’t control herself from letting out an excited scream just before the orchestra let loose the first notes of Djawadi’s iconic song with triumphant force. Cue the chaos. Picture the fans just losing it. The two men in front of me devouring personal pizzas and super-sized Cokes paused from eating to vigorously applaud from their seats while precariously balancing their feasts on their laps.

The opening number was exactly what you’d expect live: a crowd pleaser with all the trappings of the award-winning title sequence but on a much bigger scale. The orchestra hung on the frenzied violin repetitions as the map of Westeros unfolded and the Throne rotated below. Before last night, I’ll admit that I was largely unfamiliar with the many, many scores Djawadi has written for the series. I’ve watched every season like a dutiful fan should, but aside from the theme song and recognizable hits like the Lannisters’ foreboding anthem The Rains of Castamere and the murderous hymn from the Season 6 finale, Light of the Seven, I clearly haven’t been paying much attention because the music has been the show’s key to bringing its most memorable scenes to life. Over the course of two and a half hours, Djawadi, his costumed orchestra and choir gave us a thorough refresher of the show’s atmospheric melodies along with a highlights reel of Seasons 1 through 6, which also meant reliving some of the series’ most painful moments (many of which I’ve tried hard to repress) on a larger-than-life scale.

Case in point: the death of Ned Stark. Arguably, Ned’s beheading is the most climactic moment of Season 1, and it also encapsulates GOT creator George R.R. Martin’s single most stressed lesson to fans: don’t get too attached to anyone, because they will almost assuredly die a horrible death. Last night, I got to watch sweet, good-hearted, “always trying to the do the right thing” Ned Stark meet the sharp end of a sword again, albeit in a PG-13 edited version where the clip cut-off just before his head rolled. It still sucked, and it stung just as sharply as it did the first time I watched it—maybe even more, because this time it was accompanied by crystal clear orchestral accompaniment. Daenerys’ unpleasant first sexual experience with Khal Drogo was thankfully only eluded to, but Hodor’s death holding the door for Bran to escape the Night King and his army of White Walkers dragged out just as slowly as it did on my laptop screen. Almost no one shouted out “Hold the Door” because why would we? I sure as heck didn’t want to cry last night, and I think I speak for the entirety of the audience when I say “too soon.”

Extravagantly performed was the Rains of Castamere, originally played by a disguised Sigur Ros during Season 4’s “Red Wedding,” where a handful of beloved Starks met a surprise bloody end. The stage lit up in deep red, the Lannister lion was projected across every screen in the house, and a soloist in a billowing red gown sang the lesser-known lyrics to the ditty about overthrowing weak overlords. After she belted out her final note, chants of “The King of the North!” echoed across the stadium in anticipation of the obligatory clip of the massacre, louder each time until the late Rob Stark’s face appeared as large as a two-story building.

For a night that was essentially just a classical music concert gussied up with stage magic and geekery, audience participation was through the roof. Game of Thrones fans are a passionate bunch. When Jon Snow awoke from the dead, the man in the seat next to me jumped to his feet and gave a standing ovation and thunderous applause. When Khaleesi freed the slaves of Yunkai, “Mhysa!” reverberated through the stands. Before Cersei was made to repent for her sins by the High Sparrow—though we were spared the clip of her naked walk through King’s Landing—chants of “Shame!” filled the Garden. And in case I wasn’t sure of what I was witnessing, because it was a lot to take in, a middle-aged couple next to me provided a backdrop of blunt narration to each scene. If I ever wondered where my people were, I’d found them.

Aside from the show’s violinist turning into a giant Weirwood tree, a cellist dressed as a citizen of the Iron Islands splashing audience members as he played atop a platform covered with , and the Stadium being encased in a blizzard as a musician made a 16-foot-long wind instrument similar to a didgeridoo bellow during a sequence dedicated to the threat of the undead monsters beyond the Wall, most of the special effects were relegated to the second act. But they were pretty spectacular and it was well worth the wait. As Khaleesi’s dragons burned the masters at Meereen, dragon fire shot down from screens and up from the stage. I was seated a good distance from the stage and still felt the immediate searing heat as fireballs shot past the choir. And during the final number, as Cersei’s plan to “burn them all” with wildfire came to fruition, the stadium was drowned in a flash of blinding green from the stage lights and a literal ring of fire that encircled Djawadi as he played the pipe organ on an elevated riser.

The evening came to a lively conclusion with a playful encore of the Bear and the Maiden Fair, with Djawadi playing an acoustic guitar while the rest of his band danced around the stage. But as fans got up to hurriedly begin the evacuation process from the Garden, the Experience provided one last treat: an “Isse Memoriam” rolled through the long list of characters who have died on the show. There was Joffrey (meh), Ned (no!) and of course…Hodor (shattered!).

Djawadi’s concert is a gift to fans. It’s a raucous celebration of the show’s greatest moments and its MVP: the music. Take away the Iron Throne, Jon Snow’s silky locks of shoulder length hair and dragons and you’re left with a spectacular musical score that rivals the work of legendary composers John Williams, Max Steiner and Danny Elfman. While the show didn’t give spoiler-thirsty fans (see Bran Stark actor Isaac Hempstead Wright’s current favorites) anything they haven’t already seen or heard, it managed to lure an unlikely audience of pop culture enthusiasts out for a night of live classical music. Is the Game of Thrones Live Concert Experience all I’d hoped for? Yes, last night was certainly a night to remember. 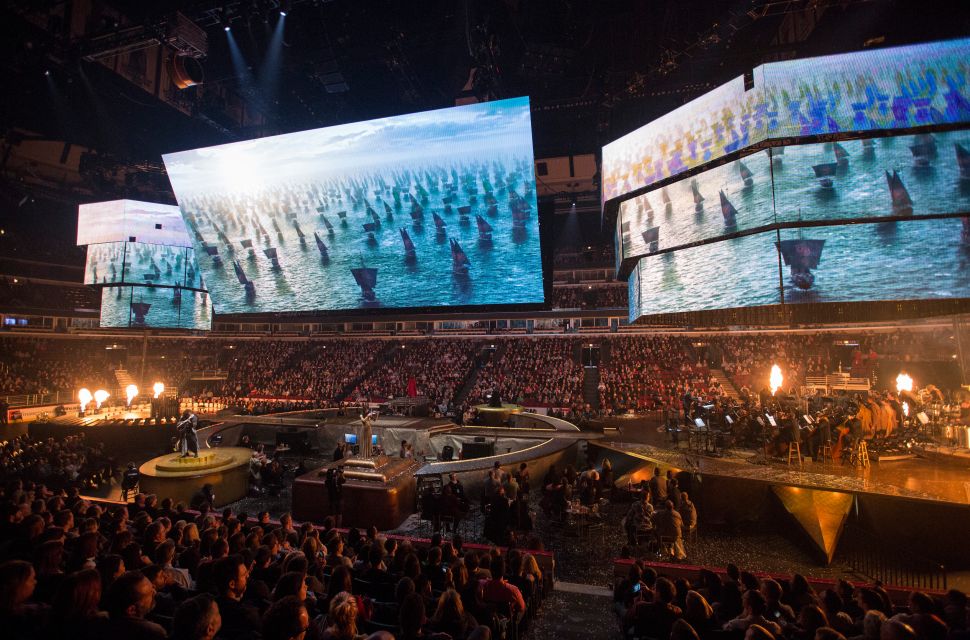