In the fourth episode, we find Hannah interviewing a hilarious writer played brilliantly by the underused and underrated Tracy Ullman. She tells Hannah about her life when she first came to New York to pursue writing – how she ended up in sex work to support herself – and how it was easily the happiest she has ever been.

Hannah is confused by how she could be happy with such a distraction taking her away from her purpose in the city. Ullman’s character notes, “That’s the mistake that we all make isn’t it? Believing that being a writer means being totally and utterly uninterrupted. It means silence, it means a room of one’s own – no, no, no that’s bullshit.” In a foreshadowing moment, she also tells Hannah that the natural state of being a female author is being childless, and that she should get used to it. “It’s like having a truck driven through your vagina, isn’t it?”

Next we find Adam on a film set, delivering some cheesy lines he doesn’t think make sense for the scene before getting unkind notes from the director and quitting the movie in a very Adam-style moment of frustration.

Then we see that Marnie has returned to her relationship with Ray, without mentioning anything about her affair with Desi. As we find them fucking over the kitchen sink, she gives Ray a strange line of her version of “poetry” about dying inside the mouth of a lion together. He is distracted because he hasn’t been seeing her much lately, and asks her to get dumplings and beers and catch up – but she can’t because she has “a thing.” As she goes on about taking an Uber and meditating, the music changes and the camera focuses on Ray’s utter dissatisfaction with this vapid relationship he now finds himself in.

As Hannah deals with her burning urethra in the bathroom due to yet another UTI – this time from “walking around in wet underwear for a couple days,” – Elijah takes a shower and asks her to use her media contacts to get him into an exclusive NY Magazine party.

At Ray’s coffee shop, an older regular customer is holding up the line to tell him a story about former NYC mayor Ed Koch and a secret underground train that ran only for him and his homosexual friends. As Ray shoos him off, another foreshadowing moment happens when we see him fall down and die right outside the shop.

Next, we see that Marnie’s “thing” is meeting with Desi at rehab, where Marnie completely deflects and takes no responsibility for her role in his relapse and makes it all about her and her problems. He gives a monologue that is both funny and makes him a more sympathetic character for once, while pointing out the massive narcissism Marnie’s character suffers from: “You were my partner, but you never saw me – you just saw this dick, or this voice, or this guitar, or this record contract. You had this idea about me but you never actually saw me as a human – me Desi – and I fucking loved you. I wasn’t like your friends, like little Hannah and the gang saying Marnie doesn’t care about the environment, or Marnie’s poetry is repetitive, or rolling their eyes and dismissing you saying ‘oh that’s just so Marnie,’ you know? I fucking loved when things were Marnie, and I was all in, I just couldn’t handle me – and you made that worse, you did – because when I was struggling, you know, you just shut down, you just fucking walked away, you gave up.”

At Adam’s, we find Jessa studying sociopaths for her degree, believing she may have been one as a child. Adam arrives home and tells her how he quit the movie. He’s in a rage about it, and Jessa tells him to make his own movie instead, so he can have creative control.

Ray tells Hermie about witnessing the death of the customer, and the guilt he feels for dismissing him. Hermie tells him that maybe what’s important is focusing on listening to the right people: “How long were you on the community board, three months? Then you quietly retreated back to dating girls with six-packs and pretending death wasn’t real. I’m worried about you Ray. You’re smart, you’ve always been smart, but your priorities are coo-coo bananas.” Ray is instantly defensive and tells him he’s no golden example of how to live a life. Hermie clarifies, “I don’t think I’m God, Ray. I’ve been with you through all these phases – the music, the failed sitcom script, the communism, community board, and now you’re just coasting – and I’m probably responsible. I’m not calling you a waste of space, I’m calling you a waste of potential.”

Back at Adam’s apartment, he is spit-firing ideas about the potential movie with Jessa – who suggests making a film about the situation between them and Hannah. At first he is completely hesitant, but Jessa makes her case: “It’s perfect. It’s about relationships… it’s about loyalty and deceit… and it’s raw, it’s powerfully true, and it might even be cathartic for us – you know help us to move on from this mess and be free.” Adam agrees: “Yeah, this might be it – it explains everything about human nature, how even with the best of intentions we can’t help but hurt each other. It’s like a metaphor for war, and corporations, religious strife… all that shit, yes!”

Hannah’s arrives at the ER only to find Joshua (Patrick Wilson), the doctor she spent a weekend with years back in the episode “One Man’s Trash,” is the doctor seeing her today. After getting past the initial awkwardness, he tells her to pee after intercourse to help prevent UTI’s, while casually mentioning, “Plus, you’re pregnant.” She had no idea, and he asks her if she knows who the father is. She mentions it is the -ski instructor from the first episode of this season, who she is not likely to ever see again. He tells her he can go with her and get her the best doctor for the abortion, which she does not take well. “What makes you think I want an abortion?”

At Shoshanna’s place, Ray is ranting about Hermie’s unsolicited advice about his life. Shosh sees Hermie’s point: “Well maybe he wants you to have a life that’s better than fine.” He agrees “Yeah, fuck, you’re right. That’s exactly what he wants. He wants me to be a better version of himself. I’m going to go apologize to him right now. Maybe it is time I make some changes, maybe it is time I do something fuckin’ real. You know, something people will remember.”

Back at Hannah’s apartment, Adam and Jessa are waiting in the hallway to ask Hannah if she’s okay with them making a movie about their story. In her absolute pain about her current situation, this is the last thing she needs. She tells them they should do whatever they want and goes upstairs.

Ray arrives at Hermie’s place but no one answers the door, so he lets himself in. Making this officially the darkest episode in Girls history, he finds Hermie laying on the couch – but he doesn’t wake up. Ray shakes him and screams at him to wake up, despite knowing his mentor and close friend is dead. 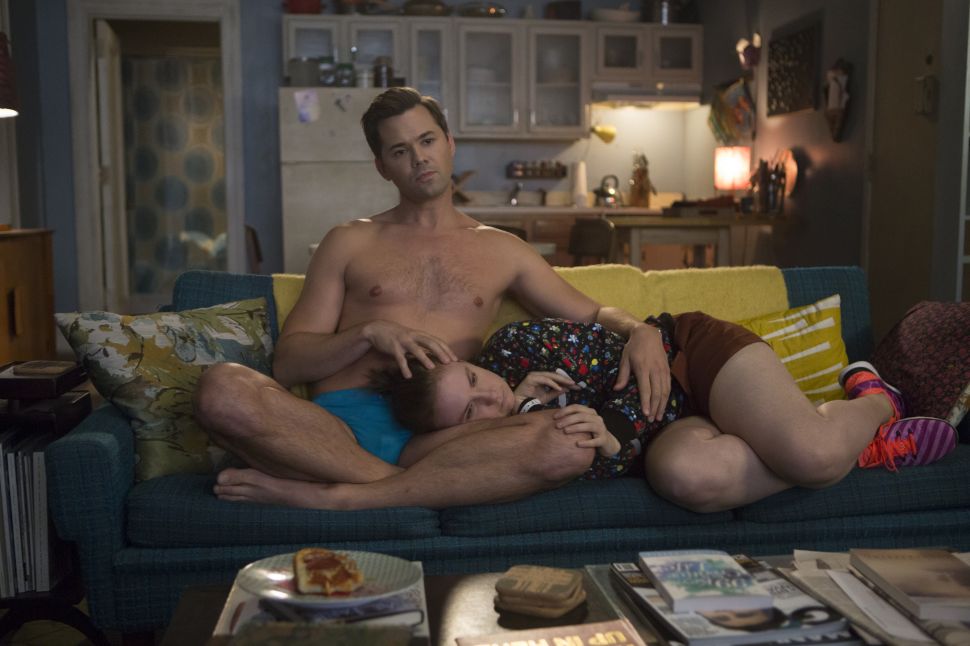