The fifth episode of the final season picks up after last week’s life-changing events for both Hannah and Ray. It begins with Hannah inspecting a single lentil, after googling “how big is a fetus after six weeks?”

After the title credit, we find Ray in his office when Shosh approaches to console him about losing Hermie, and we learn that he died of a very obscure terminal illness. Hermie did make a reference to maybe having an illness in the second season when his character was introduced, but that entire storyline seemed to disappear until last week. Shosh tries to cheer him up by making a joke that she will never die, and the inevitable reunion of Ray and Shosh comes one step closer.

Back at Hannah’s, she is making a half hilarious, half serious list of reasons why it is insane to have a baby:

She is interrupted in this task by Elijah asking if she heard about Hermie’s passing. She mentions how bad she feels for Ray when Elijah breaks into a crazed laugh in true heartless Elijah form, saying it’s the best thing that’s ever happened to Ray because he inherits everything from Hermie. He then goes on a sleepless Adderall-fueled rant about a fellow drama student he competed with at Oberlin, showing jealousy for his success in taking over the lead role in Kinky Boots.

At Adam’s apartment, they have started to shoot the film they brainstormed last week. Adam is playing himself, and another actress is playing ‘Mera’ aka Hannah. It fills me with joy to watch Adam relive his love for Hannah in these scenes, and it is powerful to watch Jessa watching Adam perform his love for Hannah. After cutting, she compliments the actress: “Oh my god that was hilarious, you are incredible, you really capture the inane prattle of someone who thinks they have more power than they actually do.” She then makes an entirely insecure suggestion: “I think what we really need right now is a tight on you, of your annoyance at the fact that you have to indulge her.” Adam completely disregards it. Watching them clash over the way the story is told, and watching Adam reflect on the difference between his relationship with Hannah and the one he’s now in with Jessa, is a beautiful way to bring the series full circle.

Hannah’s mom Loreen has come for a visit, and we learn that she has picked up a pot gummy habit. Hannah finally tells someone she is pregnant: “Any way that I think about it, I just get this feeling that…” and her mom seems supportive, “That this is your baby.”

Ray is going through Hermie’s estate with Marnie, who is immediately bored of Ray’s love for Hermie as he reflects on his life and his impressive VHS collection. She makes an excuse that she has to exercise, and Ray, disappointed, tells her to go. She suggests meeting up later, and he says they should actually just break up: “You can’t stand here for 20 fucking minutes and look at some beautiful fucking photos of my very beautiful dead fucking friend… 20 minutes.” He tells her he wants more, needs more in a partner, and she calls him cliché for making drastic life changes after “someone you sorta like dies,” claiming she is not a bad person as she walks out the door. Hurrah for this tragically boring relationship finally meeting its inevitable end.

Back at the movie shoot, Adam and Mera are playing out the end of the second season when Adam romantically saved Hannah from her OCD issues. Jessa is entirely jealous watching it, “I don’t understand why there’s this whole romantic bit where you swoop in and save her and act like you guys are meant to be together when this is a movie about a shit relationship?” Adam notes, “It’s about the tragedy of realizing a relationship is too intense to survive.” Jessa points out the obvious, which Adam needs to hear: “Adam, that’s us – we’re the intense ones – all you and Hannah ever did was sit around watching those shows about when fat people do up their houses or whatever and eat Frito Lays in bed.” Who wants to place bets on how many more episodes we will get before Adam breaks it off with Jessa and offers to raise Hannah’s baby with her?

At the laundromat, Loreen is telling Hannah how much she loved being pregnant, and how she thought her life would be set back then, but now she is utterly depressed and alone. Hannah mentions that she could still meet someone, and Loreen takes off in a rage high on far too many pot gummies, tired of hearing this suggestion. Hannah enlists a reluctant Elijah to look for her, and they adventure through Brooklyn. They finally find her in a dumpling restaurant, making very little sense. She makes a toast to Hannah’s baby, to Elijah’s shock and selfish anger. He takes off into the kitchen, and Hannah explains to him that she was going to tell him soon. He tells her it’s a terrible idea, and that he wasn’t planning on sharing an apartment “with some boring 27-year-old single mom.” She tries to warm him to the idea: “I don’t have to be boring, I could be a cool single mom, you know, like Lorelai Gilmore. I need you. It’s not like there’s a dad in the picture. I thought we could do this together.” In one of the most heartbreakingly cruel scenes in Girls history, he replies: “I’m gonna say this to your face because no one else will have the guts to: you’re gonna be a terrible mother.” And while that might have been true of Hannah when the series began, it’s not true in this final season.

Hannah returns to her mother, who throws some more tragedy toward Hannah’s decision to have the baby: “I just want you to know, every time I look at your baby, I will see my own death.” She then vomits into her food.

Outside her apartment, she runs into the actress playing Mera and discovers she is playing her in Adam’s movie. She gives Hannah some (much needed) positive discussion around pregnancy and raising kids, and speaks a final line that summarizes the entire series: “Kids are super easy, it’s being an adult that’s hard.” 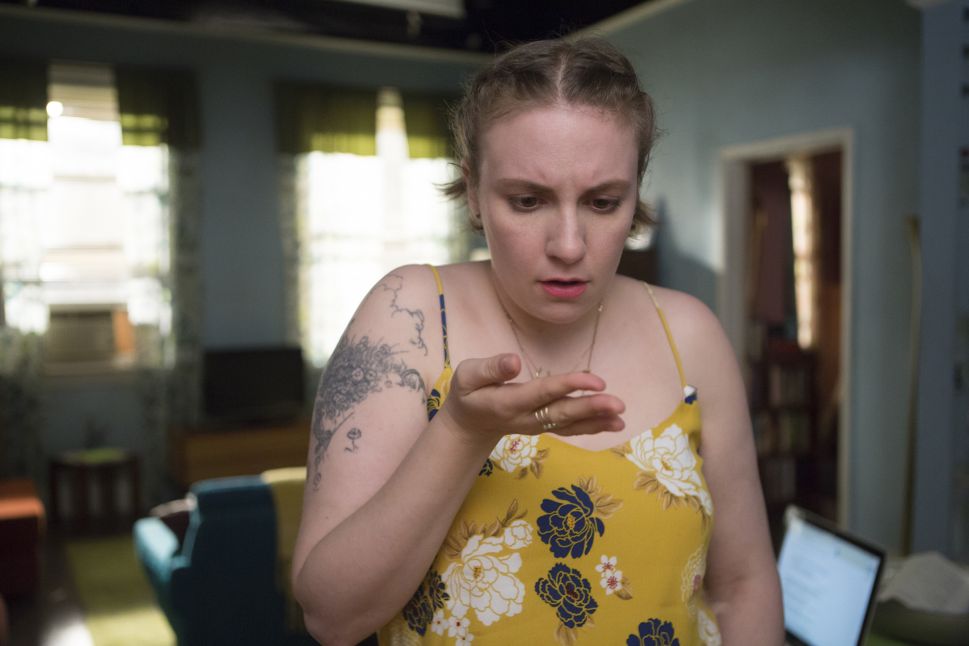