A loved one has decided to go vegetarian and has struggled in a couple areas, so I thought I’d write this guide for her.

I’m writing it for those who want to go vegan, because that’s what I am, but the ideas apply to those going vegetarian as well.

This is for those who are considering it, or who are just getting started and have questions or struggles.

If you come across struggles while becoming vegan, it’s easy to give up if you’re not really motivated. So figure out why you’re doing this.

My top recommendation: do it for the animals.

Health: Yes, you can do it for your health, but in truth, being vegan is not a panacea. You can become healthier as a vegan if your previous diet was crap and you start eating vegetables and whole foods. But you can also eat crap as a vegan (French fries, fried vegan “chicken” and Coke, for example), or you could do your best but not get some nutrients and your health could suffer. Also, it’s completely possible to eat healthy as a non-vegan — my sister is a pescatarian who doesn’t eat grains or processed foods, and eats lots of veggies. So health isn’t always the best reason, though I personally transformed my health by going vegetarian and then vegan.

Environment: As a vegan, your carbon footprint will drop greatly — the carbon emissions of animal agriculture is greater than the transportation industry, and is probably the biggest sources of carbon emissions in most people’s lives. It’s said that you can’t be a meat-eating environmentalist, and on some level, I agree.

However, I’ve found that for most people, the environmental reason for veganism is just a bonus, not the main driving reason they stay vegan.

Don’t hurt animals (ethics): This is the top reason people stay vegan over the long run, in my experience. It’s emotional: most people love animals, and the idea of killing them for pleasure can be distressful for many of us. It’s logical: there’s no good reason to eat animals other than pleasure, as we can be perfectly healthy on a vegan diet (I am and many others are). And it’s consistent: why do we love and protect dogs and cats (we wouldn’t tolerate their abuse or horrible killings) and not pigs and cows?

For those wondering, milk and eggs actually do harm animals — for one thing, dairy cows and egg hens are often abused and live in horrible conditions their entire lives, but no matter what farm they’re on, they’re killed when they’re no longer productive. And the male chicks of egg hens are crushed alive, and the male calves of dairy cows are raised in heartbreaking conditions and killed for veal.

For me, I started down the path for health reasons, but the ethics of harming other sentient beings is what has remained meaningful to me, and is the reason I’ll never go back to eating animal products. It’s good to keep that motivation in mind as you take this journey.

There’s no need to become vegetarian or vegan overnight. Like many others, I started by cutting out red meat and only eating poultry. Then I cut out poultry and became vegetarian (I’m not a big fan of fish). My wife cut out red meat, then poultry, then was pescatarian (only fish, no meat or poultry) for awhile before going vegetarian. This is a common pattern, and it makes the transition easier.

For me, I slowly transitioned from vegetarian to veganism, first cutting out eggs and then drinking soymilk instead of milk (I actually love the taste of soymilk, and no, soy is not bad for you). But I held out on cheese for the longest time, as I didn’t think I could give it up. I finally did when my wife decided to go vegan in 2012, and surprisingly, it was not hard at all to give up cheese!

The point is, there’s no one right path, and it doesn’t have to be sudden at all. Some people go vegetarian or vegan all at once and do great, but others find a slow transition to be a great way to adjust your tastebuds, discover new recipes, and figure out the logistics of the new lifestyle.

Get started however you want, but just start somewhere!

Going Out to Eat

The loved one I mentioned has had a hard time going to lunch with friends and finding almost nothing vegetarian on the menu. This can be tough. Here are some recommendations:

In the end, you’ll slowly develop a mental list of the places in your town where you can go to enjoy a good vegan dish or three, and also the mental habit of doing a few minutes’ research before agreeing to a lunch place with someone.

Personally, I end up cooking my own food most of the time, and only eat out about once a week. It’s cheaper, healthier, and you get the food you love rather than whatever they have to offer.

It’s not hard either. You can usually find a vegan version of that meal online — I started with vegan versions of chili, spaghetti, curries, tacos, burgers, pizzas, other pastas (like pesto) and other things that my family and I already liked.

Eventually I branched out and tried new recipes, and explored a whole world of vegan cooking. It was a lot of fun.

These days, I have simplified. I go for simple bowls that I find delicious:

There are a thousand variations on these bowls. Basically combine a whole grain (like brown rice or quinoa, or potatoes if you like) with a protein (black beans, chickpeas, tofu, tempeh, lentils), veggies (spinach, kale, mushrooms, broccoli, bok choy, edamame) and a sauce or spices. Healthy, easy to make, delicious. As a family, we’ve made versions of this bowl with a Mexican, Thai, Japanese or Indian theme, for example.

There are a lot of good vegan recipes online! Here are a couple: Vegan Richa, Post Punk Kitchen & Oh She Glows.

Eating at Other People’s Houses

It can be awkward at first when you go to someone else’s house to eat (for a party or family gathering, for example) and all they have is non-veg food. But you learn a couple good strategies for dealing with this:

Now that people know I’m vegan, there aren’t any awkward conversations, and it’s not a big deal.

The strange thing is that if you are just starting out as a vegan, you might not like a bunch of vegan food. That’s normal. But here’s the interesting part: your tastebuds change!

For example, I didn’t like vegan ice cream or “fake meats” but now I’ll happy have ice cream made from coconut milk, cashew cream, almond milk, soymilk — as an occasional treat. And while I don’t eat vegan “meats” every day, I think some of them are quite good.

A couple more examples: I didn’t like soymilk before. And hated kale. Now I happily drink soymilk every day. And kale is one of my favorite foods evah (I even own a kale T-shirt).

In the beginning, I stuck with familiar tastes, and just altered them as little as necessary to make them vegetarian. But slowly I tried new recipes, new vegan ingredients, changing things just a little at a time. I found that my mind opened to the new tastes and soon they became normal.

I thought I would really miss meat, but I don’t, and haven’t ever. Now I can’t stand the thought of eating meat. I used to think I could never give up cheese, but it turned out to be the easiest thing ever, when I decided I really wanted to be vegan.

Tastebuds are wonderful things, in that they can change if you let them.

Vegans have a few things to understand if they want to be healthy on a vegan diet. It’s not hard at all, but you should educate yourself. One of the biggest problems when people go vegan and fail is that they don’t get proper nutrition because they didn’t care enough to read a few articles. Don’t make that mistake.

There are only a few nutrients you really need to know about — the biggest ones probably being B12, Vitamin D, Omega 3s. If you’re eating lots of veggies, lots of other whole foods, you’ll probably do better than most on the rest of the nutrients.

B12 is something every vegan should supplement — I take a simple B12 pill once or twice a week, and fortified soymilk is a good option. Don’t believe the myth that you can get it sufficiently from the dirt in vegetables.

Vitamin D is usually easy to get from sunlight, but if you don’t go outdoors much or it’s winter and there’s no sun outside, then take a Vitamin D supplement. I take this one made from mushrooms grown in sunlight.

Being low on Omega 3s isn’t something that will cause any noticeable problems, but it seems to be good for the heart and brain. Omnis can get it from fish oil. Vegans can get them from flaxseeds and walnuts and canola oil and other similar foods, but I additionally take a daily tablet called Ovega-3 that has a good blend of EPA and DHA.

There’s more you can learn — read all about it at VeganHealth.org.

Tell all your family and friends you’re going veg, so they can share in your joy! Actually, most likely they’ll tease you about it, debate you, and not understand. That’s OK, not everyone gets it.

I have a few recommendations:

In the end, love and patience and understanding are the way to go.

Veganism doesn’t just have to be for the beautiful animals. You can use it to become super bad-ass healthy too.

It’s pretty much that simple. If you want to lose weight, I would do the above, and eat as many green vegetables with your meals as you can. If you want to gain weight, just eat more, and add nuts and nut butters and oils to your meals when you can.

A Few Myths to Debunk

It’s inevitable that you’ll run up against some common myths. It’s good to do a little research, because they simply aren’t true.

Here are a few:

I’m not going to dispel these (and other) myths here, but other sites have done it really well.

Being vegan isn’t hard, it’s not a sacrifice, it’s not extreme, and it’s not boring. It can be, if that’s how you see it.

But I see it differently:

I wish you best on this journey, my friends, as you explore a world of compassion and love. Do it with your arms wide open and your hearts full.

Leo Babauta is the creator of Zen Habits, where this post originally appeared. 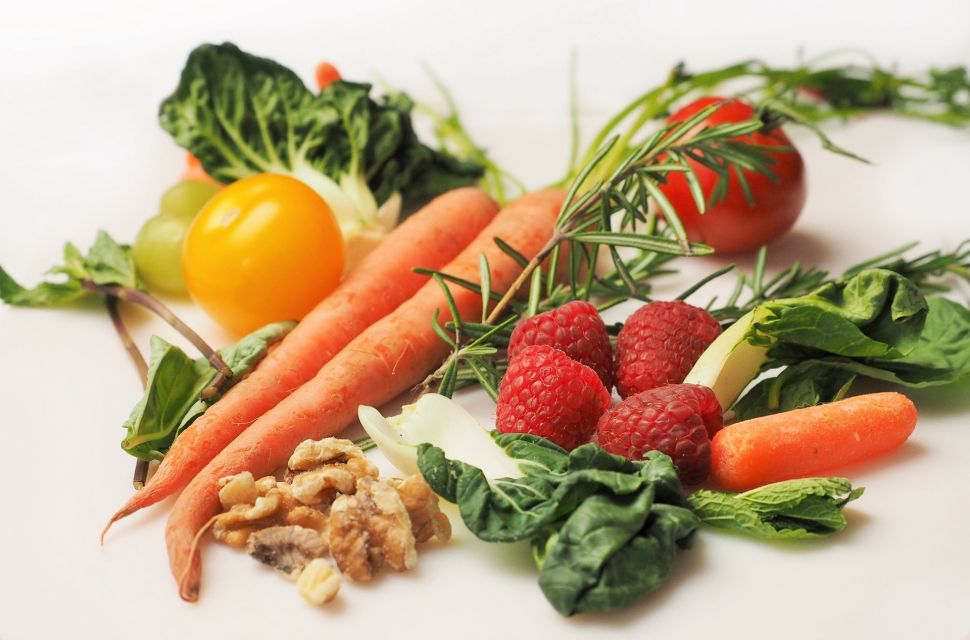