Giving back to our country and helping people in need is a hallmark of American exceptionalism. In fact, Americans are the most generous people in the world. People all across the country give tremendously to charities and contribute countless volunteer hours to programs like Habitat for Humanity that, quite literally, breathe new life into a community.

The seeds that grow into a lifetime of service are often sown very early in life. At a young age, we learn that there is personal reward in the act of service to others, and the programs feeding this approach are vital. Volunteerism and programs supporting structured service opportunities are the lifeblood of non-profit and community-based organizations across the country.

That’s why the White House budget proposal that’s rumored to eliminate the Corporation for National and Community Service (CNCS) is at odds with our country’s best intentions and would have far-reaching detrimental effects.

The elimination of CNCS would eliminate the national service program known as AmeriCorps, a veritable civilian army of teachers, engineers, construction workers, healthcare workers and more. They act as a vital, structured, consistent, and affordable labor force for more than 3,000 organizations including Habitat for Humanity, Teach for America, United Way, Boys and Girls Clubs, City Year and Catholic charities.

In exchange for their service, CNCS offers very modest compensation to service members. The most tangible benefit for the members is the opportunity to learn a new trade or skill and gain much-needed life experience that will broaden their horizons and provide future career opportunities. The impact has been enormous. Since the program’s incorporation in 1994, over 900,000 AmeriCorps volunteers have put their careers on hold to participate in this program and give back to their communities.

CNCS was created by Congress to be a public-private partnership and, because of this, the program’s federal dollars are leveraged to make bold investments with significant community impact. In fact, in 2015 CNCS generated more than $1.26 billion in private resources, which far exceeded the federal appropriation.

To add insult to injury, the amount saved by the elimination of this and other similar programs is nearly negligible; it represents .03 percent of the federal budget. The impact of the program far exceeds the investment.

In New York state alone, there are more than 22,000 CNCS service members of all ages and backgrounds. They serve at more than 3,400 locations, tutoring and mentoring children, supporting veterans and military families, providing health services, restoring the environment, responding to disasters and building homes. In New York since 1994, the AmeriCorps program has contributed more than 130 million service hours, serving more than 83,000 New Yorkers.

Annually, CNCS commits more than $92 million to New York and generates an additional $50 million in other resources. Leveraging public dollars to drive private investment into our communities also translates into numerous, measurable positive outcomes. Unemployed individuals who serve their community are 27 percent more likely to get a job.

Cutting this program will not save taxpayer dollars; it will open up gaping holes in local and state education, housing and other human service agency budgets.

At Habitat for Humanity New York City, we rely on more than a dozen AmeriCorps members to lead our affordable homeownership preservation and construction projects annually. These critical and skilled hard-workers help keep our projects running smoothly, on time and on budget so that we can achieve our mission of making affordable homeownership a choice for all lower-income New Yorkers.

At Habitat NYC, we know how important it is to measure twice before you cut. If Congress and the federal government are serious about investing in America, then they need to expand programs like CNCS—not put them on the chopping block. The recent election makes it clear that Americans from both parties want a government that will prioritize employment and put their country first. CNCS puts America first and has a proven track record of creating jobs, generating millions of dollars of private investment, and having a lasting positive impact.

Before new CNCS service members are sworn-in to serve the AmeriCorps program, they are required to recite a pledge. The first line of that pledge is, “I will get things done for America.” A Congress that is serious about “getting things done for America” needs to start with protecting the programs that have already demonstrated effectiveness in doing that job. 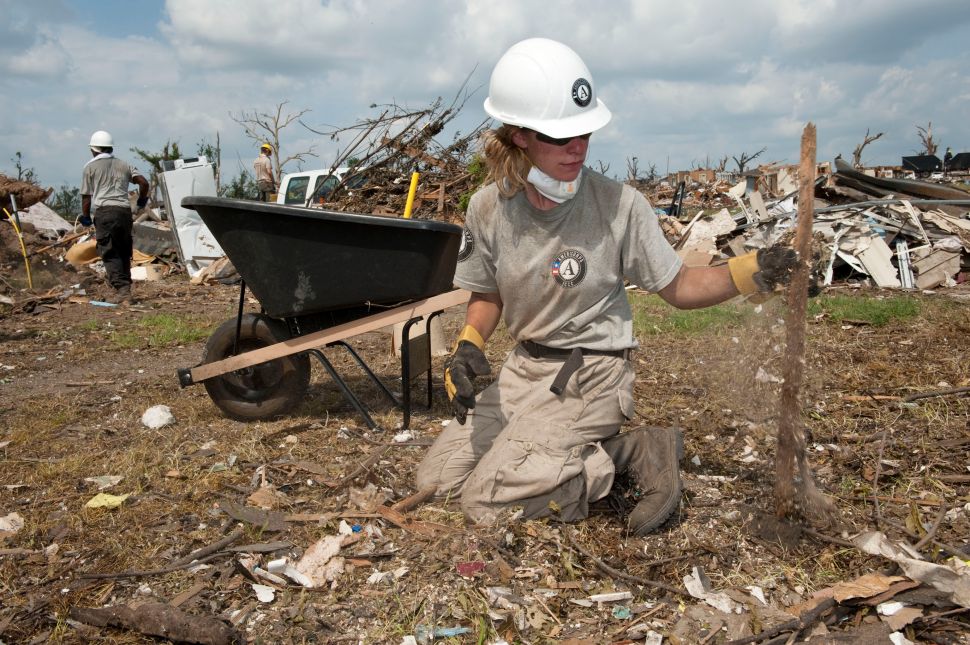