For a few sunny weekends, it seemed like winter was over, when in reality it was only getting started—puffer coats had to be dug out of closets and hand warmers were once again embraced. But before you start plotting your move to Los Angeles, consider venturing to Hanoi House for a steaming hot bowl of pho, also known as the only reason to leave your house until it’s actually spring.

Hanoi House is firmly in NYU territory, at 119 St Marks Place, but don’t let that deter you. The crowded dining room is a tropical oasis on a block otherwise full of college haunts. The dining room is inspired by French Indochina, which means plenty of foliage to make it feel like a tropical vacation.

The owners are Starr Restaurants alums. Sara Leveen managed Buddakan for four years before working with Stephen Starr to expand to New York and Miami. When she was in South Florida she met now-fiancée Ben at the opening of Makoto in Bal Harbour.

Lowell and Leveen then traveled the world together in 2013. After a month in Vietnam, they became enamored with the cuisine and had difficulty finding restaurants in New York recreating Northern style pho and Bun Cha. While they were on a return visit to Vietnam in 2016, they met with local chefs to learn how to recreate the dishes on their own. After spending the summer there, they decided to open Hanoi House.

The restaurant is famous for their 16-hour filet mignon pho served with oxtail and marrow bone, but don’t let that discourage people who aren’t carnivorous—the majority of the dishes can be made vegetarian, vegan or gluten-free (even the papaya and crispy pig ear salad).

Chef John Nguyen offers familiar favorites influenced by his grandmother who grew up in Vietnam, but with a modern twist. The root vegetable curry is made with a rich cashew butter. The Vietnamese coffee is served with the traditional condensed milk, but also offered as a dessert with a scoop of coconut from Il Laboratorio del Gelato.

But the standout is the Chè (pronounced “jay,” for ordering purposes) sundae, a traditional Vietnamese dessert. It’s made with jellies, tapioca pearls and candies, layered with a lychee at the bottom, condensed milk, candied ginger and topped with crushed peanuts. They only make 12 a night, so order early (you might consider ordering 11 more after your first).

Luckily, when it’s time for dessert you’ll have warmed up enough from the pho to indulge. Just wait for a few moments before you head back into the frigid temperatures. 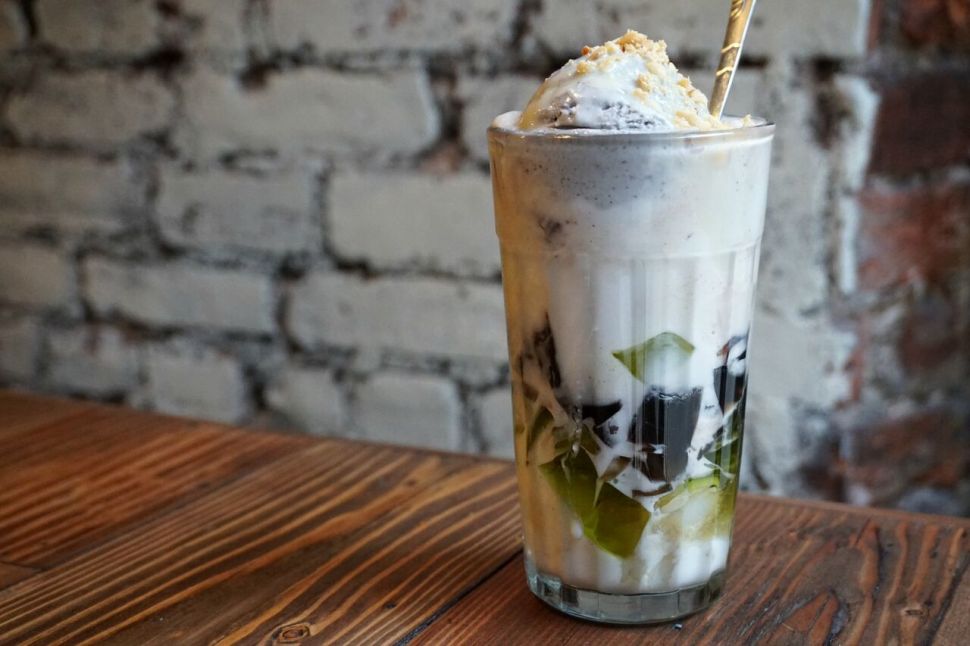