Fake news is the name of the game this week! “Alt.Truth” opens with Brett O’Keefe, the Alex Jones of the Homeland universe producing a segment on Diane Keane’s famous dead son, and how he was actually a coward who died while running from combat. Some lengthy exposition fills us in on the fact that the three panelists are ex soldiers but they weren’t actually on the ground with Captain Keane when he was shot. The fourth, a soldier who was there, is clearly suffering from PTSD and admits he’s not sure if he’s remembering everything correctly before trying to back out of the program altogether. O’Keefe is clearly paying the guy to help him smear President Elect Keane, he pays him a stack of cash in a plastic bag for some video footage. You’d think he could have just Venmoed him or something.

Saul meets with Javadi who is now living in a homeless shelter and growing back his fingernail. They talk about trying to get him in front of the president and how they are both running out of friends and allies before Saul heads to Carrie’s place to try to get her help. He’s met by Max, who’s installing a now pointless security system in Carrie’s apartment, and who informs him that she’s got “the black dog” which is what he calls depression. Carrie’s been hanging out in Franny’s room recovering from her white wine bender and when Saul asks her for help she starts yelling “unfit mother” over and over. Pretty awkward time to ask for a favor but Saul’s in TCB mode, so he wins her favor by taking her to the foster house where Franny is living so she can basically spy on her daughter while sitting in a car. I guess if your mom is a spy that’s how she would watch over you, stake out style. It’s kind of sweet but also unnerving. Franny seems like she’s happy with her foster family.

Afterwards, Saul asks Carrie to help him get Javadi in front of Keane so Javadi can prove that Iran is indeed working within the confines of the nuclear deal and there’s no parallel program thus preventing some sort of horrible executive action against Iran. He explains how he figured all of this out in Abu Dhabi after talking to Nafisi and tracing his weird cheapo cigarettes back to Mossad, the Israeli Intelligence Agency who is apparently trying to make it seem like Iran is up to something nuclear. He also explains that he can’t go through the CIA to get to Keane because he’s being watched. Carrie then tells him all about Dar trying to scare her away from Keane and about the whole Sekou blowing up thing followed by the whole Conlin getting shot in the head thing. They finally start to trust each other again and the Berenson/Mathison friendship is finally back.

Back in the woods, Peter and Astrid are walking around taking hikes and stuff, driving into town to get groceries, living quaintly as heck. Peter’s getting noticeably… weirder. He’s now just sort of dropping various words from sentences, talking about how his reality is losing it’s realness, stuttering. He finds his medicine, money, and passport while he’s snooping around the house and then he goes out to the car and finds a gun, which he takes all the bullets out of so he can throw them into the lake like they’re a dead guy’s pocket watch or something. I’m assuming he does this to try and prevent him or anyone else from using them. At the store he eats a ton of free meatball samples while his chaperone, Astrid, shops. He trips out on his bending reality again, convincing himself he’s seeing the mysterious man from across the street wearing a baseball cap and buying corn dogs or something and then again checking into a seedy motel on the side of the road while they drive home. This causes him to panic in a moment of paranoia, demanding Astrid tell him who owns the cabin they’re in, which she doesn’t seem to know the answer to other than it’s Dar’s people, so he spazzes out and tells her they “only fucked because they were lonely” and then punches her with his one good hand and drives to the motel to beat the guy up with a tire iron.

Javadi’s playing checkers at the homeless shelter like he’s been living there for years when Carrie picks him up to take him to Keane. He remarks how Saul must be low on allies if he’s using someone who isn’t even in the system anymore as his go between, and then he spouts off a bunch of cryptic statements about men getting old. After a bit of banter he reveals to Carrie that he secretly moved Brody’s ashes to a burial site for martyrs. Javadi’s meeting with Keane is bad news for team BerenMath. Keane isn’t keen on meeting him given that he masterminded the Langley bombing before he was turned into a double agent. He’s supposed to be convincing her that the parallel program is fake news, but he just goes ahead and starts saying the opposite of that, leaving Saul and Carrie standing on the sidelines panicking like they just tried to show someone a dancing frog in a top hat. He tells Keane that there is a parallel program and that she should be wary of Iran, which is a crock of lies, and she buys it which causes her to distrust Carrie and Saul. When she leaves and they both look at him and go “what the hell, dude?” he reveals that he’s working for Dar, because Dar seemed like the safest bet and he, you know, lives in a homeless shelter.

Speaking of Dar, he has a meeting with Brett O’Keefe where Brett, in supervillain fashion, explains his whole plan to smear Keane’s son and transitively, the President Elect herself. He has a copy of a video from his PTSD addled friend’s helmet Go Pro that actually shows Captain Keane dying while trying to save a fallen soldier, but he’s spin doctored it to make it look like he died while running from battle. Dar is here to help out with this because Dar is terrible.
The coda hits us with some top shelf TV drama. Quinn is getting into Jesse Pinkman territory with how likeable, broken, tortured, and tragic his character is. I really hope he escapes all of this in a Nazi’s car someday. At the motel, he wangs the stranger over the head with his tire iron only to flip him over and realize it’s not the man across the street, it’s some blonde guy who looks like he sells vegan muffins. Realizing what he’s done, he rushes back to the cabin to look for Astrid and at first can’t find her. When she finally comes downstairs she tells him she intends to leave and he more or less begs her to stay and help him recover, managing to summon a heartfelt apology from his dilapidated mind. They have a very Jerry Maguire exchange where she realizes he would probably be saying he loved her if he wasn’t wearing a tinfoil hat and muttering about the government and she announces her intentions to stay right as Peter is shot by a sniper through the window. He falls to the floor still alive while she runs to the car to get her gun and in a sinking dire moment, he is unable to spit out the words that the gun has no bullets in it. This is all guns from act one going off in act three. She runs to the car, grabs the gun, aims it at the sniper (who is obviously the man from across the street), squeezes the trigger and it clicks emptily before she’s shot and killed. All at once Peter’s paranoias are being confirmed and contradicted. The man is real, Astrid isn’t lying about anything, Astrid’s dead, meatballs are free, black is white, up is down. Quinn runs to the lake and when he’s shot at he falls in the while the man shoots into it randomly, eventually seeing some blood. He leaves and after we are unable to hold our breath any longer Quinn emerges, still breathing 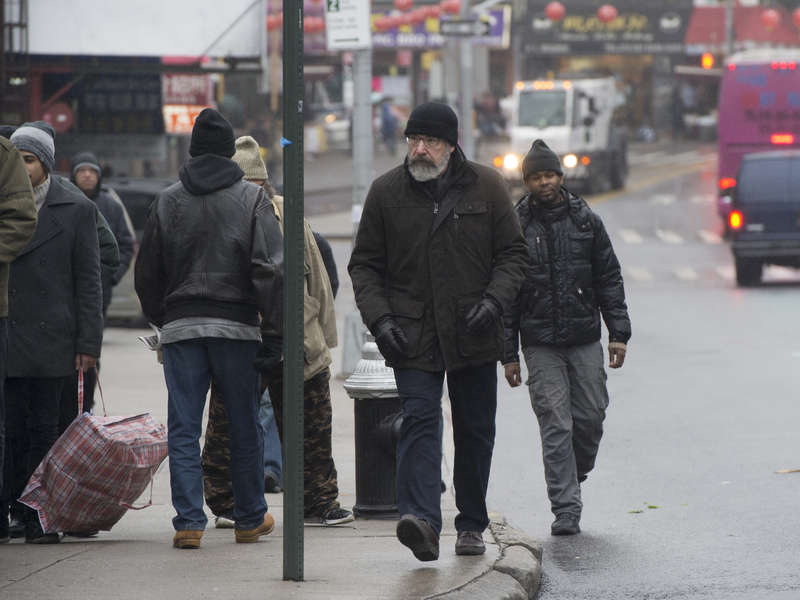