I will never look at an M&M the same way ever again. Or Eminem. More on that later. Living in New York and watching a season of Homeland set in New York has been interesting because it’s all around me. There are huge subway ads for Homeland in my station. A flash of a Google Maps screen in this episode reveals that part of the plot takes place a little over a mile from my home, yet I don’t really know who the audience of this show is. I Know they exist, because it’s been renewed for a 7th and 8th season, but I don’t seem to be running in the same circles as them. In its earlier seasons it flirted with being almost right wing entertainment, like that movie about Benghazi, or Jeff Dunham. The villains were radical terrorists, the heroes were white Americans. Now it’s set in Brooklyn in an America with a female peacenik president and the villains are Alex Jones style disinformation purveyors, Israeli factions, and corrupt government officials. In order to enjoy the entirety of Homeland’s subject matter I guess your love of television has to outweigh any political hang ups you’re harboring about it’s fictional U.S. Government. I don’t know who the fans of this show are, but if they’re as gripped by Season 6’s Dar Adal subterfuge as I am they will enjoy finally seeing some damn justice this week.

In the opening shot Carrie Mathison appears to either be on a very dark episode of The Office or in AA. I actually guessed AA after her white wine meltdown but I was wrong, it’s therapy. Therapy mandated by the child protective agency that took Franny away. She’s trying to participate but finding it difficult being forced to open up as a barter in order to get her kid back. I really enjoy when Carrie calls bullshit on things like this. A VERY well cast therapist replies by asking rhetorical questions in his best therapist voice. “How do you make it work? How do you balance?” How do you have it all while raising a kid and working in the big city as a single woman with a murder mystery to solve? Very Liz Lemon.

President Keane meets with Dar Adal, now totally buying his whole flimflam about the parallel deal. Now convinced that Saul tried to dupe her into easing up on Iran, she’s decided to send him back to Langley. They talk sanctions and names while Dar sits on top of a mountain of lies with that feline smirk of his. Later, Dar celebrates the way everyone in New York celebrates a big break at their job: Brunch! Him and Javadi are having this whole room service extravaganza thing in a hotel room at a tiny table gloating about how they just pulled off a big one when, if you’re paying close attention, Javadi’s dialogue marks him for death. He starts talking about how he wants out of the game, he’s done, and that was his last big play. If we’ve learned anything from George Clooney in heist movies or old black sergeants in cop movies, it’s that you never announce out loud that you’re 6 months from retirement or that this is your last job. You’re just asking to get killed. Javadi goes on listing all the enemies he’s made over the years and Dar pipes in “Mossad too,” to which Javadi responds something along the lines of “huh? I’m cool with Mossad, I just did this whole thing for them!” Dar, hell bent on wrapping up loose ends and being as unlikeable as possible, reveals that Mossad simply used him and is still going to torture him for information. The elevator door opens and some Mossad guys walk in with a syringe, a black head bag, and one of those laundry baskets like they’re in a Scooby Doo mystery. Javadi pulls a heroic by slyly calling Carrie on his smart phone and holding it in his sleeve. I guess he then also goes into options and unlocks his phone because Carrie connects the call to Saul who attempts to track it and they’re unable to save him in time by they do get to the hotel and find the phone and it’s open, like all spy phones.

Plot wise, I enjoy that this whole thing goes down. As a swan song for his double agent nature, Javadi turns face one last time and enables Carrie and Saul to bust Dar wide open. I am having a hard time buying this miraculous phone call though. This is a 3 way conference call with everyone on speakerphone yet somehow with no one’s voice coming out of Javadi’s phone which would give him away. Also Dar and the Mossad agents don’t seem to notice when he ditches his phone. They’ve got a hostage who just happens to have no phone. None of this adds up. Phone technology is also killing fiction, I get that, but COME ON! Your hostage could be blowing up your spot on Pokemon Go right now!

In other news, Max decides to put his Game Stop resume to use and infiltrates the mysterious company that killed Ray Conlin. When he gets to the job interview he is screened by none other than Brett O’Keefe, aka Homeland Alex Jones. O’Keefe grills him about a one year gap in his resume until Max simply writes “M+M” on the paper. They stare one another down for a moment before Max reveals that it stands for “Meth and Masturbation” in one of the all time great job interview tactics of all time. He’s technically talking about mourning Fara’s death in Islamabad but the whole exchange is just bananas. I feel like this scene kind of pushes our beliefs about what’s grounded in reality in the Homeland universe but I don’t mind at ALL because it was just great. M+M forever. Anyways he gets the job and is ushered underground to a sort of supervillain call center office where a bunch of his IT brethren behold as he gets their system back online. That system turns out to be what they refer to as “sock puppets” or phony social media accounts used for the purpose of misinformation. You can really feel the echoes of the 2016 U.S. Presidential election here.

At Astrid’s cabin, police begin to investigate while Peter stares at Astrid’s corpse in the dark like, well, Peter. The cops destroy a bunch of forensic evidence while entering from the door with the bullet holes in it and Peter smears some of Astrid’s blood on his mouth before slinking off into the car and driving to a gun store where he sets a truck on fire with a molotov cocktail so he can steal a bunch of guns. Peter’s Rambo now.

Having found Javadi’s phone, Saul and Carrie are able to show Keane a video of Nafisi confessing to his collusion with Mossad and they all collectively figure out that Dar was the mole within the CIA who also masterminded the assassination of Sekou Bah and made it to look like a terror attack. Keane, now on the warpath against Dar breaks her dignified presidential nature and calls him an “obsequious little shit” before having probably my favorite Keane moment where she delivers the line “what is wrong with you people?” at basically the entire cast. It’s got a very Seinfeld/It’s Always Sunny dynamic.

Later, Keane introduces Carrie to George Palos, her new Solicitor General, who informs her that in order to prosecute Dar they will have to go after him over the breach that occurred in Berlin under The Espionage Act. This will incriminate Saul and cause his career to be entirely wiped out. Keane assures her that Saul will be pardoned but no one seems to buy it. Carrie meets Saul on a park bench, spy style, to break the bad news to him. The scene is well acted by Patinkin, he starts off like a dog with a bone, an old man happy as the day he started his first job. He fades to frustration eventually turning on Carrie with personal barbs about their unprofessional romantic antics. Carrie and Saul’s iron bound friendship seems to crack. I really felt it.

Keane attempts to pull a fast one on Dar by meeting with him to see who he endorses for her cabinet (these people will obviously be in bed with him) but is clearly unable to conceal her rage and the two face act each other HARD. The scene is tense and mostly non verbal. We see Dar pull the envelope out of his blazer and slowly put it back in as he realizes he’s been caught. In the car home he delivers yet another untypically crude line, telling his driver to “shut the fuck up!” before getting home to be greeted by Peter/Rambo. He almost uses his There Will Be Blood-esque silver tongue to get into Quinn’s head and get the gun out of his hand but Quinn, in a moment of triumph for his mangled mind, shakes it off and pistol whips him. Dar calls the man from across the street, who’s eating in some all night diner, and fills him in on what’s going on, only for the man to insist that Quinn is dead. Dar informs him that he is very alive and is also unaware that the man tried to kill Peter, making things a little more complicated. Cut to Peter listening in on the phone call and it appears the monsters Dar Adal created are all coming back to feast. Finally. 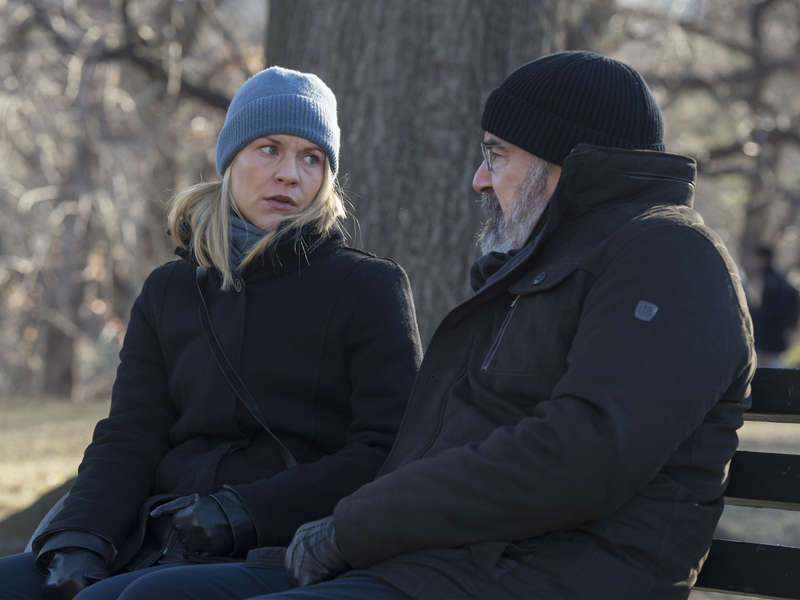