It’s another slow burner as Homeland season 6 twists and winds it’s way toward an inevitable climactic showdown between Dar Adal and well, everyone. Most of what we’re treated to here is player positioning, much like that last episode of Game of Thrones, but without a teleporting eunuch. Anyways we open with Peter Quinn visiting the diner to which he’s tracked the man from across the street. No dice on the man, but he recognizes a waitress named Nicki who calls him “Johnny,” and with whom he apparently shares a past. Based on how much we’re learning about Peter’s past as well as his clearly doomed sanity, I don’t think he’s making it out of Season 6, but I bet goes down with some fireworks.

Max tells Carrie Mathison about Brett O’Keefe’s role in his new misinformation gig but she’s got her teeth sunk into Dar Adal and dismisses the information as irrelevant, seeing as she’s poised to take him down. This is, true to character, a dumb mistake. As she’s exiting her car service, her driver becomes creepily friendly, presenting a business card and making ominous remarks about her appointment with her daughter. Dar really does have a flair for villainy. He had to have instructed this guy to be extra spooky like that. When Carrie calls Christine Lonas, her case counselor, she’s informed that their appointment will have to be postponed because Franny is at the doctor with a minor illness. I got Heisenberg vibes. When Carrie gets to Madame President-Elect Keane’s office, she asks Rob Evans and George Palos if they sent the car service, and of course they didn’t. As they begin to record her statement for their planned deposition of Saul Berenson, we’re treated to a cinematic moment comprised of an audio washout and slow camera zoom while it all hits Carrie at the same time and she bails on the deposition. I swear this episode has Breaking Bad written all over it. To Rob’s behest, she bolts out of the room and calls Dar’s people, informing them that he’s won and she just wants to see her daughter.

Later, Keane, Rob, and Palos regroup by considering offering Saul a deal in exchange for his help. Little do they know, he’s somewhere in Williamsburg procuring a bug-out bag from an old friend who’s full of diamonds and cryptic sayings (“you can’t fall off the middle”.) Before that even begins the matter though, Dar just goes ahead and shows up uninvited to have another dramatic stare down/political innuendo session with Keane. He explains away the Peter Quinn gun print on his face before offering over his prized envelope with three names in it (his cabinet endorsements for Keane). Just as watching these two lie to each other while we know they know they’re lying to each other Keane just comes out and calls Dar on all of his bullshit in gratifying bit of heated dialogue. She verbally bitch slaps him for asking her to appoint three people who slandered her on the campaign trail and reveals that she’s aware of all of his misinformation attempts. He bucks by assuring her he’s got the intelligence community behind him. You know, for as much guff as I’ve given Homeland for getting the election wrong, watching a fictional president go to war with the CIA feels oddly prescient. The dialogue here almost reaches the pro wrestling level hot air of the actual current government, yet somehow manages to maintain a little dignity when Keane announces that “in the future when you look back on it, this will be the moment I decided to put your ass in jail,” and then Dar responds by leaving and phoning his pal O’Keefe, who burps out “Time to weaponize some info.”

Meanwhile in Peter Quinn land, he’s paying a kid to tommy knock on a strange door in the suburbs while simultaneously giving him some freshman lessons on underhanded business dealings (he scolds him for not asking for half of his payment up front). Convinced the house is empty, Peter breaks into what is apparently his old Black Ops meeting ground and has a warm flashback about his salad days as a war criminal. Suddenly, his old coworkers come home and he has to run and hide in the garage, where he discovers the freaking van that the man from across the street used in the Sekou assassination.

Having properly decoded Dar’s threat, Carrie calls Christine Lonas and no one is surprised to find out that suddenly Franny is okay. In fact, it was all a misunderstanding. Suddenly her house is flooded with Secret Service and Keane shows up to talk about what went down with Dar. Now fluent in Dar’s language of blackmail, Keane asks what he’s doing to stop Carrie from taking him down and questions whether it’s Franny, which of course it is. Remember when you told Carrie you couldn’t help her while she was white wine drunk, Keane? This is why you hold your friends’ hair back while they puke.

Mira Berenson is suddenly back on screen when her brunch is interrupted by note from Saul, instructing her to run out into the street and get in a Range Rover. Having not talked to him in two years, she does what any of us would do if our ex interrupted us mid meal with a physical text message, she drops everything and goes. She’s taken on a fun little heist movie montage complete with a body double and Saul’s voice over narration before arriving at a Saul Berenson in a dramatically empty high rise apartment. He drones on like a Bright Eyes record about disappearing, falling on his sword, and how counterintelligence will be coming for him through her before she impressively deduces exactly what his situation is. He explains that if he stays he’ll be cut a deal but humiliated, to which she responds like only an ex-wife can: “When has that ever made a difference?”

O’Keefe’s “weaponized” information surfaces on television as his piece on sergeant Andrew Keane goes viral. Carrie sees it while visiting Franny and more importantly, Keane sees it and grills her staff for advice on how to deal with it. They flaccidly agree to ignore it. At the risk of allegorizing too much here I have to applaud Homeland for accurately representing our current inability to properly deal with a misinformation attack. Part of me thought that Keane was going to keep blazing at both barrels, but I’m sure that will be reserved for the next two episodes. For the time being she stays up late watching the smear piece on her son and cry-facing into a laptop.

Back at Max’s horrible new tech job, he overhears Dar and O’Keefe over-explaining their entire plan together in that obvious exposition that’s usually reserved for cartoon supervillains. He manages to slyly take a video of this on his phone before getting totally busted some time later. Dar sees a document open with Peter Quinn’s photograph on it, but is distracted by more villain expo.

As a coda, Carrie and Saul cross paths but miss each other while lurking around. Carrie comes home to find Quinn’s sex worker friend Clarice with a video message from him on her phone, asking her to come meet him wherever the hell he is. She’s taken aback because she’d assumed he was still in the mental hospital this entire time. Saul comes by her place after she’s gone and decides to break in just to get out of the street. He calls her telling her he’s in her home and he’s ready to eat sword, Mira having set him straight. When she doesn’t call back he snoops around and finds a locked room with the classic hardboiled detective “cork board full of pinned newspaper clippings and connected pieces of yarn” ongoing investigation project thing going on and he smiles a proud mentor-ish smile. Fittingly, Carrie’s taken up Clarice’s offer for a ride to Quinn and arrives to find him speaking brokenly and aiming a sniper rifle at Dar’s right hand man, the man from across the street. I guess the saying would go “you can take the bipolar jazz freak blonde lady out of the CIA but you can’t take the CIA out of the bipolar jazz freak blonde lady. 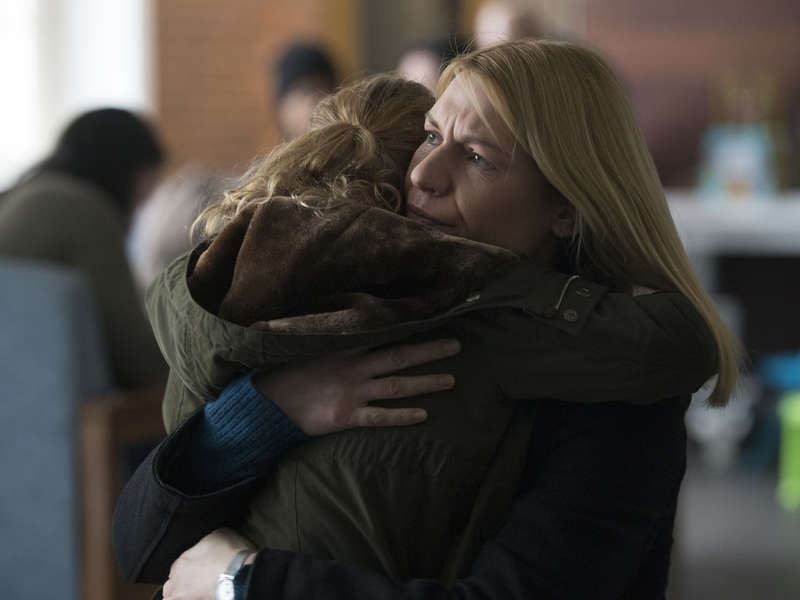