Nikki Lane is giving country music a much-needed update, with a Brooklyn twist. The Greenville, South Carolina native spent a few years in the borough before going on tour, and eventually relocating to Nashville. She previously lived blocks away from the Williamsburg Music Hall, where she performed on Thursday night.

Lane sounds familiar, like a Neko Case and Jenny Lewis hybrid, with a dash of Grace Potter and a little New Orleans infusion from Kristin Diable. Before she resided in Brooklyn, the singer moved to Los Angeles to start her own denim brand after dropping out of high school to pursue a career in fashion. Now, she’s committed to music, but does have a vintage shop in her adopted hometown of Nashville, and wears the same sparkling, fringed looks on the road that can be purchased there.

Lane is far more country than her alternative peers, and she’s unafraid to embrace fringe, sequins and cowboy hats onstage, or on her Instagram. Her bandmates wear John Wayne-worthy Stetsons, and so did select members of the audience—”all the hats are our friends,” she explained, out of necessity. While plenty of strange fashion choices fly by Bedford Avenue, outfits made entirely of fringe and cowboy boots aren’t exactly expected in a sea of Doc Martens and denim.

Lane wore a sparkling white pantsuit that wouldn’t look out of place on Kacey Musgraves or Grace Potter during her Williamsburg performance. The updated pantsuit was custom made, courtesy of Union Western Clothing, with chain stitch embroidery of the Queen of Hearts on the back and details down the sides. The ornate ensemble would be at home in Lane’s Nashville vintage store, Highway Hillbilly, which houses similar Western wear—think leopard cowboy boots, vintage party dresses and trucker hats.

Lane showed her alt-country roots, referencing a drunken night at Clem’s and previous shows at Union Pool, which she has since outgrown. At one point, she played two acoustic songs. “I did write them but I do smoke a lot of pot so it’s complicated,” she explained, while trying to remember them. After an overeager audience member professed their love she said, “I’m taken, he’s standing right over there… awkward,” referencing her boyfriend, opener and bandmate Jonathan Tyler.

The country singer loosely resembles Zooey Deschanel, including the porcelain skin, doe eyes and dramatic lip, which make the decidedly kitschy ensembles enviable. One glimpse of her Americana rompers and cowboy hats would make even a true Brooklynite consider investing in custom embroidered Western wear. Ironically, of course. 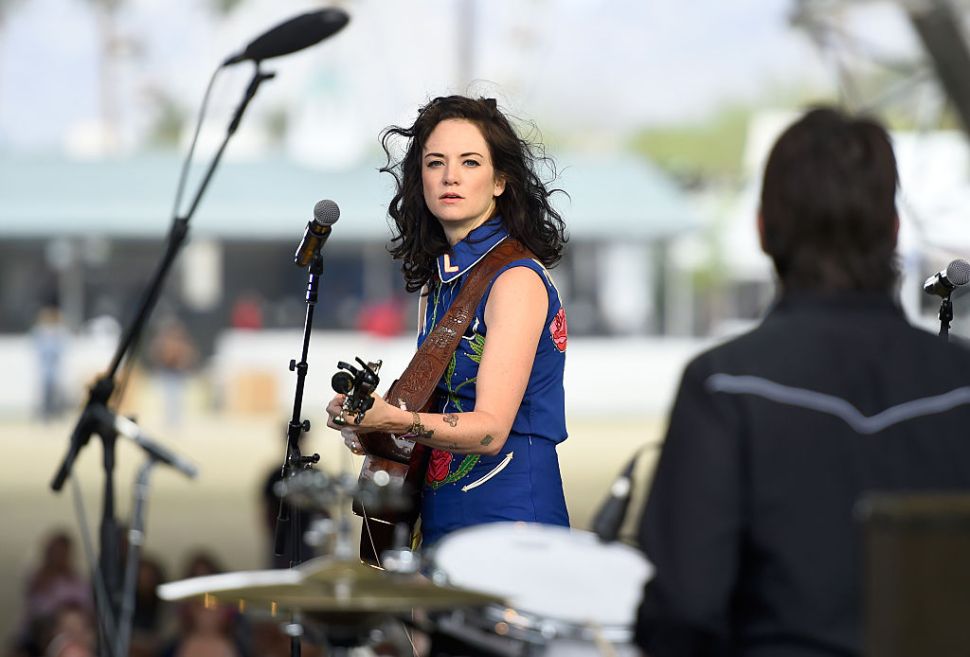