When I say my jaw is wired shut, I mean it figuratively. There’s no wire; really, the surgeon ensures that my teeth remain firmly clenched together with heavy-duty rubber bands that have been affixed to my braces pre-surgery. All of my food (presumably for the next six weeks) has to be liquid, thin enough to be filtered through my closed teeth and swollen cheeks like a whale’s baleen (I live mostly on Ensures and soups diluted with extra chicken broth and send through a blender).

There are a few other fun perks of undergoing double jaw surgery (the “double” refers to my top and bottom jaw—both cut, shifted, and set in place with plates and screws): the lower two thirds of my face, from my eyeballs down is numb which makes my chin feels like a rubber Halloween mask, and I have no sensation in the roof of my mouth. My face is so swollen that I look like a Richard Nixon piñata. I can tell you it’s like to vomit when you can’t open your teeth (think: horror-movie).

I have also spent every single day at my parent’s home in Chicago, tethered to the couch by a fear of the public glimpsing my hideous, Quasimodo swelling and by lethargy brought about by discomfort, and no solid food to eat.

It was difficult to concentrate on reading, especially the first few days when my face felt tight and pulsed with pain. I was (am) stranded in suburbia, my only human interaction the Frankenstein’s monster-style grunts my parents can understand about half the time and text to my most sympathetic friends.

I have suffered with anxiety and depression early on in my life—I know what irrational hopelessness feels like, the sensation you’ve fallen to the bottom of an incredibly deep well and even imagining climbing out is too exhausting a prospect. My anxiety and depression, lifelong companions who after nearly a decade of medical treatment and cognitive therapy were content to eye me from the far side of the room, silent but smiling, were now beginning to inch closer once again. I was in pain, on the diet that was fed to the orphans in Oliver Twist (not that I had any appetite), and it felt like my face itself had transformed into a Bane mask. And so, naturally, I went to Netflix and began watching The Great British Bake Off.

If you haven’t yet had the pleasure of watching Great British Bake Off—put out under the name Great British Baking Show in the United States (Pillsbury has a copyright on the phrase “Bake-Off”)—allow me to explain the premise: twelve or so amateur bakers from across Britain are gathered together to spend their weekends in tent set up in idyllic pastoral countryside and bake three challenges a week to be judged by two incredibly British people with incredible porn star names, Mary Berry and Paul Hollywood. The show’s hosts, Mel and Sue, are equal fans of both pun and family-appropriate innuendo. Buns and soggy bottoms get plenty of play.

If this were an American cooking show, each baker would be introduced with a sob story and a flashy intro. “I’m here to win,” one baker might declare, crossing her arms intimidatingly, after we learned that she desperately needs the prize money to pay for her step-niece’s medical bills.

For GBBO contestants are more like that really nice co-worker who brings amazing brownies to the office and also remembered to ask about your sister who you mentioned was visiting. We meet builders and grandmothers and students and IT workers—all different ages and upbringings, all different life statuses, all people who just really love to bake. The show makes no secret of its filming schedule (weekends, so constants can practice during the week), or that the bakers use recipes that they’ve prepared in advance. The show itself is wholesome and straightforward as a simple shortbread dough.

Unlike most American cooking competitions, there is no monetary prize, or really any prize at all: the only reward for the baker who sticks it out for the entire season (one baker gets eliminated each week) is a plaque, a bouquet, and the pride that goes along with the title of Britain’s best amateur baker.

Maybe that has something to do with how cooperative the bakers are, how helpful they are of one another in the tent, how, even when disaster strikes (the #bincident, Deborah stealing Howard’s custard) the bakers don’t blame one another or become enraged. Frustrated sure, but frustrated the way any baker would be if you spent all afternoon on a goddam Baked Alaska only to find out it didn’t set. These are good neighborly people. You need a hand getting your torte off the baking dish? Here, let me grab that. Mel and Sue are equally helpful—double checking recipes, stabilizing pastry towers—punning guardian angels who act as though their job is to make sure everyone is comfortable and having as good a time as they can.

When you’re watching The Great British Bake Off, your brain can disappear from your body, transmuting into a place of choux pastry and custard and spun sugar, where the stakes are never higher than disappointment and everyone can be a good sport and have a sense of humor about things while you learn that, god, yeah, you’re right, I should have proofed that in the oven for longer. Whereas the hours had seemed endless deserts between forcing down doses of mucus-y medicine and chalky drinks they sell next to the protein bars at the grocery store, I could spend all afternoon watching the GBBO and forgetting that time had ever existed outside Mary Berry’s insistence on perfectly flakey pastry crust.

It might seem masochistic for a girl who cannot eat to watch an endless array of buttery confections artfully crafted and then consumed, but I would argue it’s far worse when you can eat, but can’t eat, say, an ille flottante with perfectly poached meringue. I’m already without an appetite and completely dissociated. I am the perfect unbiased viewer, able to invest my full energy towards loving these kind British people and their work without feeling the constant urge to snap at Paul, “Are you kidding me? That looks delicious! I would eat that in zero seconds, who cares if it has a little tunneling!” every time he criticizes a dish.

So no, at this moment, I am not binge-watching The Great British Bake Off for the food (although I do now get to have the fantasy, comfortably in the abstracted distance, that when my jaw recovers I’m going to get very, very good at baking). It’s an escape hatch for a trapped brain. It’s an alternate universe of helpfulness and people who know and care very much about laminating your pastry and making sure your chocolate has a nice glossy finish, and that your dough hasn’t been under-proofed.

In The Great British Bake Off, there is no hatred, no unhappy relationships, or sick pets, or people who don’t love you as much as you love them.

There is no pain or sloth or numb, fat lips, or sitting on a couch and feeling alone.

There is simply no room for any of that when you have to fit both custard dishes on the same rack to make sure they bake evenly. 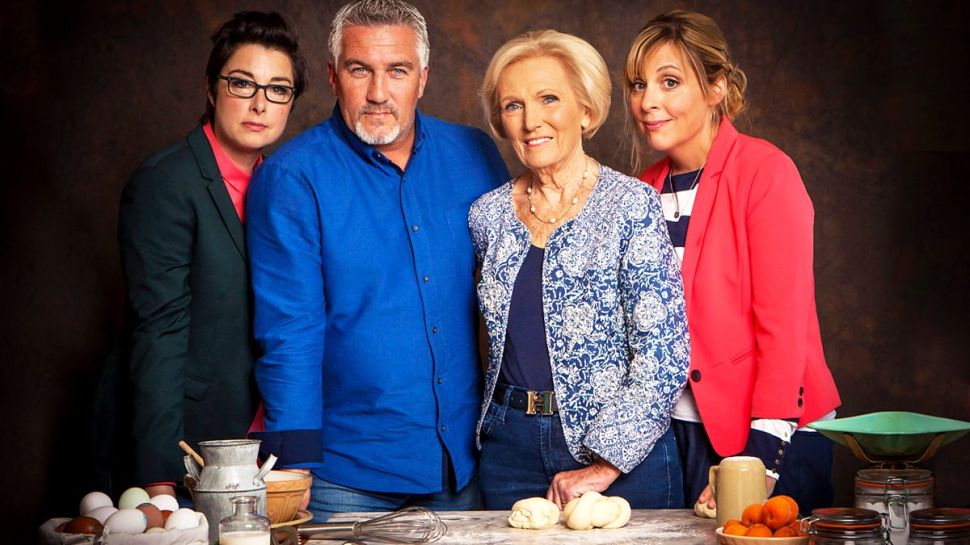