No one really likes going to art fairs in New York City. Even if you “love art” or “buy art,” it’s almost always a slog to get there, wade through hordes of Rachel Comey boots and air kiss people you haven’t seen since the same fair last year, or its analogy in Europe.

To wit: when I arrived at Independent New York yesterday for the fair’s VIP preview, the woman manning the door took one look at me and asked if I was “someone’s plus one.” When I said no, she peered at me, quizzically, like she was weighing whether to call security. I let us pause for a full beat of unimpeded eye contact before offering up that I am press. “Ahh,” she said. But her face said, “that is the only acceptable explanation for your appearance.”

This attitude—an undercurrent, in places where art and commerce meet, of “extreme vetting,” if you will—is apparently widely felt.

“It’s the weight of money,” said Alain Servais, a prominent collector based in Brussels who was shopping for art with his girlfriend, that flattens the experience of U.S. art fairs. This weight is perhaps most acute at New York City’s art fairs, where even the campy trappings of Miami are absent, extinguished by anorexics in uniform black.

This is why Independent stands out.

“It’s the best in New York this week,” Servais said, and there are a dozen or so art fairs afoot. He was considering buying work both at Independent and the New Art Dealers Alliance fair—he was particularly taken with the booth from Bureau at Independent—but probably won’t buy anything from the Armory show.

Independent, which was started by gallerists eight years ago and bills itself as having “disrupted normal art fair conventions,” is in its second year in the elegantly appointed Tribeca venue Spring Studios. Works from 50 galleries, non-profits and projects from 20 cities around the world are arranged on four floors in space lit with ample natural light and overlooking the Hudson.

Last year, they launched a Brussels edition, in a similarly well-lit space where the booths wound over many floors, to critical acclaim.

The fair, which opens to the public today, has drawn notable galleries as well as smaller names and shows emerging, established, mid-career and even outsider artists, all in a space a fraction of the size of a large commercial fair. There is also a significant number of solo booths from women. Galerie Perrotin’s large pencil drawings by Tatiana Trouvé drew interest, while Barbara Bloom’s travel posters, which juxtapose facts about destinations—”No Journalists!”—with tourism ad images, were upsettingly prescient and powerful. Those appeared courtesy of David Lewis.

This year Independent intermixes new works from the likes of Juliana Huxtable, Cory Archangel and David Shrigley with historical and semi-historical works from the ‘70s and ’80s by artists like Hal Fisher and Peter Hujar. While Gagosian-level names might be absent, artists with rising profiles in their own circles are well represented.

The appeal of Independent comes down to more than taste—although praise for the curation came from all sides at yesterday’s preview. It’s also location. That’s how New York works.

“It’s Downtown,” said Jasmin Tsou, owner of Lower East Side gallery JTT. This is, as is often the case in art world matters, both a fact and a signifier. For Tsou the standout booths were from Triple Canopy, showing the site-specific wallpaper by Archangel, and Native Informant, where the Fisher works from the 80s were housed. Perhaps the art, too, can be described as somewhere between the old money establishment and Brooklyn.

Architecture is also important to a viewing experience—and an area where New York’s other art fairs mostly lag and Independent rules.

“It’s the architecture, the lighting, the environment—the little things,” that distinguish it, said Humberto Moro, a curator with the Savannah College of Art and Design Museum of Art. In contrast, “there was no AC at the Armory yesterday,” meaning on Wednesday, for that sprawling fair’s VIP preview. “It was excruciating.”

Each floor had a distinct feeling attuned to the specificities of the architecture. The seventh floor held smaller pieces, such as Derrick Alexis Coard’s portraits, from White Columns, illuminated by the best light but not crowded in by the lower ceilings on that floor. The grand walls of the fifth and sixth floors held the expected abstract painting, but it was interspersed with sculptural pieces set simply on the floor (such as the delicate arrangements of Douglas Ashfords at Elizabeth Dee) and pieces like David Shrigley’s Gong, an imposing gong (surprise!) in the middle of the room, displayed by Anton Kern Gallery.

Floor to ceiling glass overlooking a river will help any experience of New York, but this one also unites art from well-known galleries as well as a few names you might not know. For a buyer just starting out, Independent fills a perfect space: well curated, lower pressure environment.

“It’s attractive to the new buyer, [which is] the most common species,” at fairs, Servais said.

Meanwhile, dealers chatted amicably with buyers, curators, collectors and reporters yesterday, in sharp contrast to the speed-dating feel of Art Basel Miami or the Armory. A more humane art fair experience is possible.

This is the way to do an art fair in New York City, if one must. 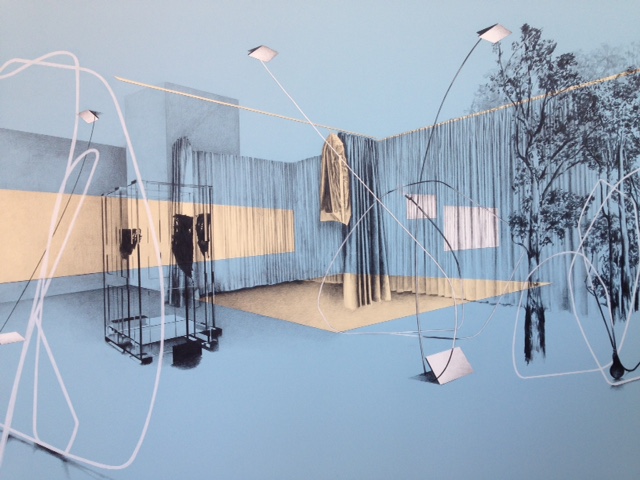