I spent approximately seven hours on Sunday having my hair straightened at a beauty show.

After my formaldehyde-free, celebrity-approved Magic Sleek hair straightening treatment started to grow out after six months, I could no longer avoid spending an hour a day blowdrying and straightening. So, when I was given the opportunity to give up frying my hair with a straightener by getting a second Magic Sleek treatment, I gladly accepted. In return, I acted as a hair model, and had my tresses straightened in public for a few hours.

The International Beauty Show, unfortunately nicknamed IBS, is currently celebrating its centennial at the Javits Center. To commemorate the occasion, salon owners, beauty bloggers and stylists wore their best Bachelor-worthy spandex ensembles. There were more going out tops than should be allowed at 10 AM, alongside skintight black pants and booties, with plenty of lace-ups and cold-shoulders.

The convention was a combination of Ulta, a full service salon and a girls’ night out. More than 500 beauty companies were present, in hopes salon owners from New York, New Jersey and Massachusetts would start carrying their products.

Plenty of big name brands attended, including colorful haircare from Amika, everyone’s favorite middle school hair dye Manic Panic, Tweezerman (promoting a line specifically for guybrows called G.E.A.R.—apparently “Tweezerman” isn’t manly enough) and Dyson, showing off their new $400 blowdryer personally approved by the Kardashian’s hair guru. There were also barbers from BaByBliss giving elaborate buzzcuts (intricate shapes included), all while explaining every move on microphones in a move akin to a haircare concert. Apparently, the man bun is far from over, only its been updated with buzzed sides.

The most obvious upcoming beauty trends were everywhere. If the attendees with Easter egg colored tresses were any indication, mermaid hair is no longer confined to Pinterest boards. Hairdressers gave tutorials on how to give customers custom colored hair, including plenty of blues and purples. Instagram makeup is still popular, with a focus on thick, heavy brows, long lashes and dark statement lips Kylie Jenner would love.

There were hordes of people sporting colorful glitter pouts (certainly inspired by the Pat McGrath Lab’s frequently sold out sequins). For those there to browse, there was the opportunity to emerge with a full Clueless-worthy makeover, in the form of mink eyelashes, teeth whitening, facials, permanent makeup, gel manicures and a public tanning booth.

By the end of the day, my hair had been touched by strangers contemplating purchasing Magic Sleek for their own salons. Also, I had seen the same inconceivably tall green mohawk, courtesy of Dreamcatchers, the self-proclaimed “world’s best hair extensions,” walk by about a dozen times. But waking up with silky and straight hair made the seven hours entirely worth it, especially since it means never having to wield a blowdryer again (at least for the next six months). Still, I’m not quite sure whether I’m ready to embrace glitter lips for a daytime occasion quite yet. 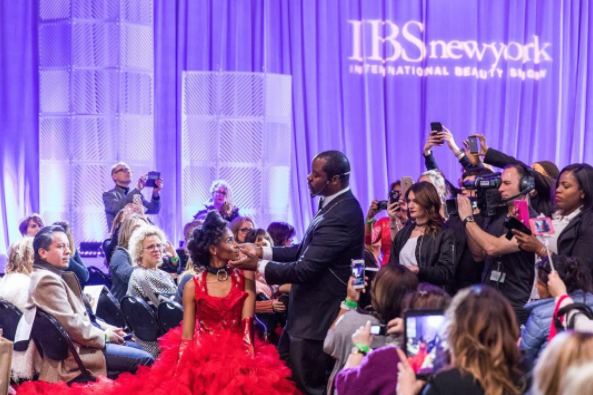