Let’s get this out of the way up front: Just because it was O.K. in the early ’70s, doesn’t mean it’s the best idea to base an entire story around the blondest, whitest human being in the world Kung Fu-ing entire hallways of Asian actors because, somehow, he is the best at martial arts. A lot of capital-letter Not O.K. things were cool in the ’70s—these racist as hell McDonalds ads, for example. John Travolta. Etc.—but we’ve progressed since then. With that said, Iron Fist‘s social issues are discussed far more extensively in our Finn Jones profile interview, written by the Observer’s most handsome writer. Here, we’re going to discuss Iron Fist, Netflix TV show and final piece of the Defenders, for what it is.

I mean, Marvel’s Iron Fist is not an actively terrible show. It’s not actively good, either. Iron Fist is the textbook definition of “just fine.” In a world where TV shows are multiplying like Gremlins at a park and Marvel makes movies like it gets paid by the Comic Con announcement, being “just fine” doesn’t quite cut it. Basically, Iron Fist is the La La Land of the Marvel Universe, in that it almost doesn’t even deserve the level of backlash it’s receiving, because it amounts to a lot of anger over art that’s blander than unbuttered bread. At least La La Land had Gosling. With Iron Fist, we’re left with… 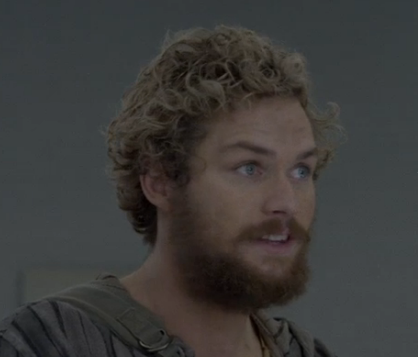 We meet Danny arriving in New York City after a ten-year absence, ear buds in and OutKast’s “So Fresh, So Clean” blaring. Unfortunately, Danny arrives neither fresh nor clean. Danny arrives shoeless, and with the beard of a person who lives off discarded McDonald’s buns. So naturally, when Danny walks into the lobby of the billion-dollar Rand Enterprises claiming to be its long-lost heir, security steps in to escort the increasingly belligerent homeless fellow from the premises.

Important note, before we proceed: Not only has Danny Rand been gone for ten years, but everyone he knows and loves believes him to be dead. When Danny was but a boy, a plane crash took the lives of both his parents (we know this because Iron Fist shows us their deaths many times, and, trust me, will continue to do so). Danny, however, survived the crash, but was stranded in the mystical city of K’un-Lun. Since K’un-Lun only appears on our astral plane every ten years, Danny bided his time under Lei Kung the Thunderer, who taught the billionaire boy-king the way of the Iron Fist. This means Danny A) can focus his entire body’s chi into his fist, B) is now prone to doing Tai Chi at inopportune times, and C) is above average at kicking you in the face. In the comics, this also meant Danny had to kill a dragon named Shou-Lao the Undying. Jury is still out on whether Netflix’s Danny Rand did or did not kill a dragon named Shou-Lao the Undying. If Netflix blew their Shou-Lao the Undying budget on The OA, I’m going to be pissed.

But I digress. Really, the important thing to note is that Danny has returned an ass-kicker. So when these security guards—honestly just doing their jobs, probably have kids at home—approach this ass-kicker, he kicks their ass and makes his way to Rand Enterprise’s office floor in search of Joy and Ward Meachum. The Meachum siblings are the children of Harold Meachum, who built Rand Enterprises along with Danny’s father, Wendell Rand. When Wendell’s plane took a swan dive into the Himalayas and Harold succumbed to cancer, the siblings took control of the company.

Some things to know about Ward Meachum (Tom Pelphrey): He was an asshole during Danny’s childhood and he’s preeeeetty much still an asshole. If Tyrell Wellick from Mr. Robot existed in the Marvel Universe, he and Ward Meachum would get together on weekends to pay homeless people to sword fight for their amusement. Ward Meachum would 100 percent be the rich kid in gym class who claimed the dodgeball didn’t touch him even though it clearly did, if the exclusive private school he attended allowed such plebeian activities as dodgeball in the first place. Pretty much all you need to know about Ward Meachum is that he responds to adversity by angrily throwing his dinner napkin:

Joy (Jessica Stroup), on the other hand, is the more level-headed, down-to-Earth sibling. Joy, aptly named, gives the bearded homeless man barging into her office claiming to be her dead childhood friend way too much benefit of the doubt, before security finally tosses him from the building. “He really did look like Danny, right?” she says to Ward.

Danny, because being stranded in K’un Lun teaches you martial arts but not basic social etiquette, proceeds to break into Joy’s house. Or, more precisely, he breaks into his childhood home, in which Joy is now living. Danny finds no evidence of the past he left behind, of his old life, but he does find Joy’s dog, which he can control because holy shit this show just IS The OA, isn’t it?

With nowhere left to turn, Danny searches for allies. First, he finds a homeless man in Central Park named Big Al. Big Al…dies of a drug overdose by the end of this episode, and adds very little to the story overall. He does manage to offer Danny some sage life advice, a favor Danny returns while saying the most condescending thing a man can say while still sleeping in Central Park: “I guess people think we’re pretty alike,” Danny says to Big Al, as if he himself doesn’t currently look like what would happen if a police sketch artist was asked to draw “Bob Ross But On Meth.”

And then, Danny meets Colleen Wing. Straight up, Colleen Wing is the undisputed shining bright spot of Iron Fist. For actress Jessica Henwick to go from playing the least interesting Sand Snake in Game of Thrones‘ Dorne storyline to Colleen Wing is like the kid with glasses from Little Giants being drafted to the NFL. Colleen runs a martial arts program through her apartment/dojo for struggling inner city kids. When Danny shows up spouting his nonsense about “challenging the master” and “protecting K’un Lun from all oppression,” Colleen threatens to smack him in the face with a stick. Colleen is great.

Outside the dojo, Danny is assaulted by a group of goons he recognizes as Rand Enterprises security, who chase him into the Chinese parade that Hollywood seems to think is happening in Chinatown 24/7. This scene, though, that sees Danny using the crowd to his advantage to take out the thugs one by one, is one of those flashes of a more exciting Iron Fist than the Iron Fist we got. It’s the type of street-level badassery a character like Iron Fist, no matter who is under the mask, can provide with a dash of mythology not offered by Daredevil, Jessica Jones or Luke Cage. More of this please, and less corporate legal procedures.

The premiere ends on not one, but two twists. The first follows Ward Meachum into a lavish hidden apartment bunker, where, surprise, his father Harold (David Wenham) is very much so still alive. He’s been holed up since his “death,” apparently in deep with an organization that sounds a whole lot like the shadowy ninja-cult The Hand. Harold’s only company, besides the occasional Ward visit, is a 20-something intern named Kyle who Harold makes work outlandish hours and display unwavering loyalty in exchange for a possible future career. I’ve been Kyle. We’ve all been Kyle.

The second twist comes during a meeting between Danny and Joy Meachum. Joy, despite some doubts, knows there’s definitely something strange about this “Danny Rand.” She knows he’s got inhuman-esque abilities, after he leapt over a New York City cab in front of her apartment. I couldn’t get a GIF of it, so here’s John McEnroe doing the exact same thing in the Adam Sandler film, Mr. Deeds:

Joy agrees to meet with Danny to listen to his explanation, a story he begins to tell before…passing out on the floor, his tea poisoned. You see, Joy, who I guess just keeps roofies in her office, doesn’t trust Danny after all. The faces of the Meachums, the only people Danny thought he could trust in all of New York, are the last things he sees before his vision fades…

…and he wakes up, strapped to a bed in a psychiatric facility. You may recognize this story beat as “Killing Time to Pad The Middle Of A Season.” Marvel loves it. Iron Fist loves it so much they couldn’t even wait until their second episode! 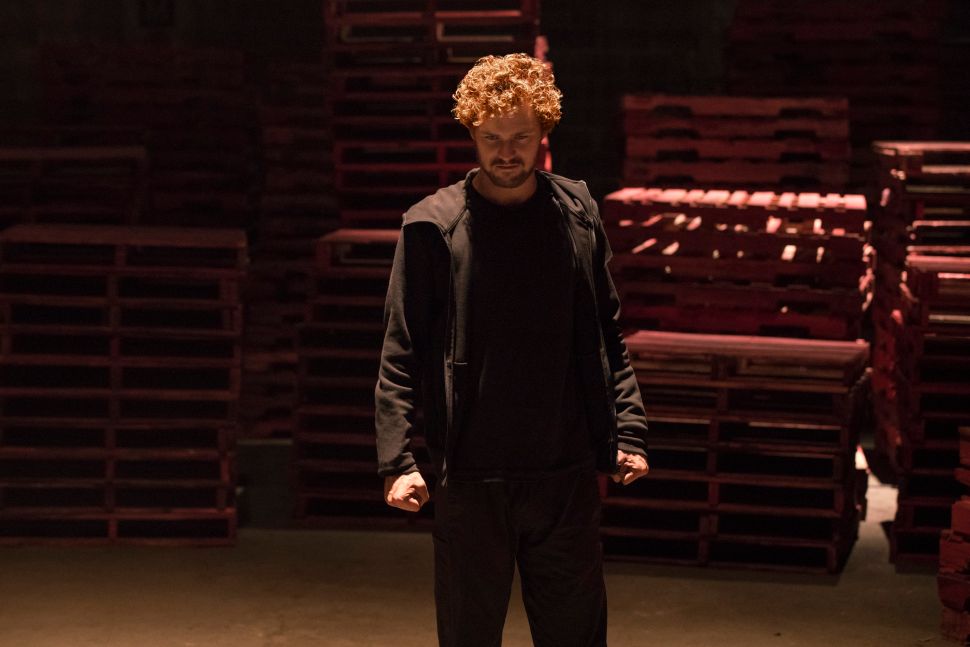