By now, I hope you’ve gotten a sense of how brilliant Jordan Peele’s directorial debut, Get Out, is. If not, please go back and read this very long piece I wrote about it. Or, wait, no! If you haven’t seen it, first go see it–it’s still in theaters, despite those singing candelabras and talking teapots that took over the box office last week. THEN come back and read my very long piece on how Get Out belongs in the cinematic pantheon of Greatest Films.

Seeing it a second time did not deliver diminishing returns, either. Instead, I was more able to focus on the themes and specific character beats instead of just barely hanging on to the plot like my life depended on it. And you know something? This movie should not be such the surprise that it is. Ever since Jordan Peele’s Comedy Central sketch show with collaborator Keegan-Michael Key debuted on January 31st, 2012, Key & Peele managed to flip the horror of modern microaggressions on its head to show the hilarity beneath. Consider this selection from Zadie Smith’s 2015 New Yorker profile of the two comics:

Where the comedy is racial, the familiar, singular “race card” is switched for something more like the whole pack fanned out, with the focus on what Peele has called “the absurdity of race.” “I always look back at standardized tests,” he said, as he sat in Hair and Makeup, making a small but significant wig transition from “sports announcer” to “sportscaster.” “They make you say what race you are, where you check out, and I think that’s ultimately an unhealthy tradition.” His eyes, naturally rather narrow, widened dramatically. “It is crazy that as a kid we’re taught, ‘What is your identity?’ We’re asked that!” Key, who sat at the other end of the trailer, going from having hair to being bald to having hair again, is similarly struck by the irrational nature of racial categories. “The limbic system is alive and well,” he said. “And it’s going, ‘I need to find a category. I need to find a category. If I don’t find a category, I’m not safe.’ ”

Get Out, while having funny moments, is not a comedic film. It can be hard to overlay such violent and traumatic incidents from the film with the brio of Keye & Peele. But there are definitely signs in some of their most popular sketches that Get Out had been brewing long before Catherine Keener started clinking her teaspoon. Below, five instances where the show predicted the premise of Get Out.

Get Out-related quote: “Has this dude ever heard of mise-en-scene?”

Get Out-related quote: “What do you think of the police?” “Well…I loved their third album!”

Get Out-related quote: (While holding a single Fruit Loop): “The forbidden fruit!”

Get Out–related quote: “Come on? What is that? They seriously wouldn’t let her eat us?” 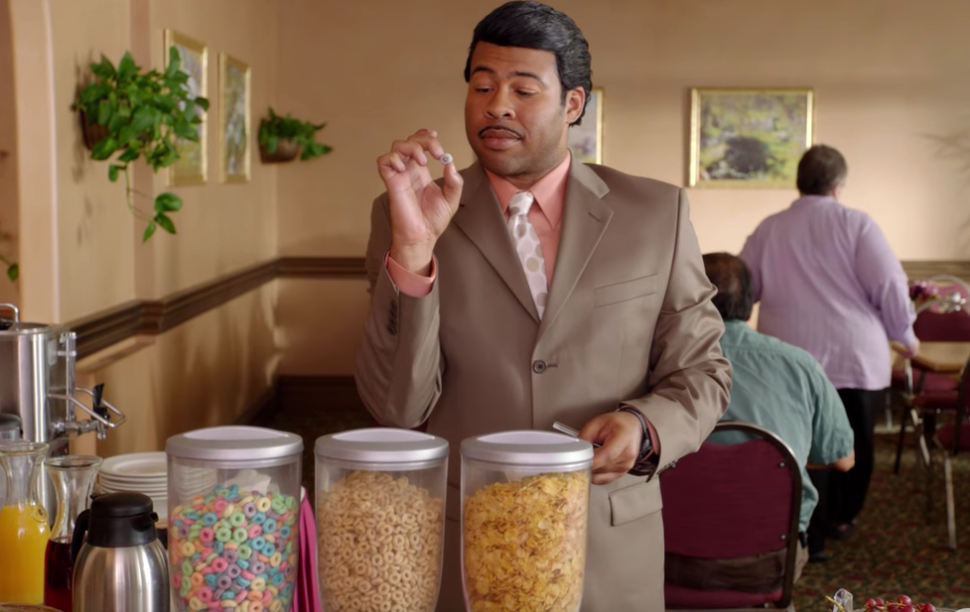