Last week I explained in this column how President Donald Trump, despite facing serious political challenges over his murky ties to the Kremlin, was fortunate to have opponents more motivated by partisanship than truth-telling. As long as that state of affairs continued, the commander-in-chief was likely to avoid the thorough scrutiny which his apparent links to Moscow actually merit.

A lot has changed in just a few days. Last week began promisingly for the president, with his joint address to Congress on Tuesday evening earning better reviews than many had anticipated. Then it all unraveled the next day, when it was reported that Attorney General Jeff Sessions, a key member of the White House inner circle, had two discussions with Sergei Kislyak, the Russian ambassador in Washington, during the 2016 election campaign.

It’s hardly abnormal for sitting senators—as Sessions was last year—to meet with foreign diplomats, even Russian ones, but the precise capacity in which he chatted with Kislyak suddenly became important. Was Sessions parleying with the Kremlin’s emissary as a senator or as a top advisor to Donald Trump?

To make matters worse, Sessions couldn’t exactly recall what he and Moscow’s man in Washington had discussed. To say nothing of the fact that Sessions seemed to have recently failed to tell the complete truth under oath when he was asked about some of this during his Senate confirmation hearings as attorney general. Sessions volunteered, “I did not have communications with the Russians”—a statement that seems untrue by any normal definition.

The president’s bizarre efforts to make his links to Moscow a non-story have only made it a bigger one.

Additionally, Kislyak is known in Western espionage circles to have a close relationship with Russia’s intelligence services, as many Kremlin diplomats do. Roughly one-third of the “diplomats” in any given Russian embassy are actually full-time spies masquerading as diplomats, while the remaining two-thirds are bona fide diplomats who are nevertheless expected to share information with their spy-colleagues. The line between routine diplomacy and espionage can therefore get rather blurry.

That Sessions’ discussions with Putin’s emissary to our country may have had an espionage flavor to them seems plausible, given that they occurred when Vladimir Putin’s clandestine efforts to swing the election Trump’s way were at their peak, according to the consensus assessment of our Intelligence Community.

By last Friday, in an effort to make the mounting scandal go away, Sessions had recused himself from any Department of Justice investigations into Russian interference in our election. This recusal reportedly sent the president into paroxysms of rage, yet in reality Sessions had little choice, as even prominent Republicans accepted that he had to recuse himself—while leading Democrats were demanding the attorney general’s resignation.

To make matters worse, it turns out that Sessions was but one of seven members of Trump’s inner circle who had hush-hush discussions with Moscow’s emissaries in 2016. Several of those meetings happened at the Republican convention in Cleveland last July, which Ambassador Kislyak attended. It was much noted at the time that the GOP party platform on Ukraine—where Moscow continues its not-quite-frozen conflict, which began in 2014 after Putin’s theft of Crimea—suddenly shifted to a markedly more pro-Russian position. Suspicions of a Kremlin hand influencing Trump emerged at once, but the then-candidate flatly denied anything of that kind had occurred, telling a journalist that he “wasn’t involved” in the Ukraine policy shift.

Now, it turns out that several members of Team Trump met with Russian officials, including Kislyak, in Cleveland last summer, and according to members of his own policy team, Trump himself was involved in changing the party platform on Ukraine to something more pleasing to Moscow.

One of Trump’s people who met with Kislyak in Cleveland was Carter Page, a big-shot investor-manqué whose exact role in the Trump campaign was never precisely clear, but who possesses abundantly clear ties to the Kremlin. Page is so reliably pro-Putin that a speech he gave in Moscow last summer got top billing at a propaganda website run by Russia’s Foreign Intelligence Service.

On Friday evening, Page went on CNN to push back the latest allegations regarding the president and his increasingly apparent ties to Moscow, but the interview turned into a debacle. Page was unable to keep his story straight about his meetings with Russian officials, and appeared confused about his own role in the Trump campaign. His incompetent effort to quash this story only made it a bigger and stranger one.

Perhaps in response to this setback, the president was up before dawn on Saturday, having fled Washington on Friday for his Florida hideaway at his Mar-a-Lago resort – and he was tweeting. In a stunning series of four incendiary tweets, President Trump accused his predecessor of high crimes, specifically “wiretapping” him at Trump Tower in Manhattan during the election campaign.

In perhaps the most bizarre public statements from any American president, Trump claimed that Obama had violated the law, “This is Nixon/Watergate. Bad (or sick) guy!” then added for good measure the accusation of “McCarthyism” perpetrated by his predecessor. The irony of Donald Trump—whose mentor was Roy Cohn, the notorious attorney who served as McCarthyism’s public face in the 1950s—making such a claim was not lost on many observers.

Trump offered no evidence for his far-reaching accusations, and while the Obama camp predictably asserted they were wholly false, that view was echoed on Sunday morning by James Clapper, who served as the Director of National Intelligence from mid-2010 until January 20 of this year. In the spy trade, flat-out public denials are rare, but that was exactly what Clapper said to NBC: “There was no such wiretap activity mounted against the president, the president-elect at the time, or as a candidate, or against his campaign.”

As DNI, Clapper certainly would have known if something extraordinary like wiretaps on the Republican presidential candidate or his team had been authorized, so his account seems persuasive. Even worse for the president, it’s been reported that FBI Director James Comey was driven to fury at the White House over Trump’s casual use of Twitter to accuse Obama—and by extension the FBI—of gross illegalities.

According to The New York Times, Comey was so incensed that he asked the Department of Justice to intervene and issue a public denial that any wiretapping against Team Trump occurred. DoJ has not yet done so, which may have something to do with the fact that it’s headed by Jeff Sessions, who’s caught up in KremlinGate too, but the unprecedented situation where an FBI director feels compelled to ask for a public retraction of the president’s accusation indicates how off the rails the new administration has gone in just six weeks.

Comey’s outrage is felt across the Intelligence Community, which has been repeatedly maligned and attacked by the president, who seems blissfully unaware of the consequences of his harsh tweets and utterances. Trump’s latest fact-free assertion of high crimes perpetrated by the IC at the behest of President Obama has heightened already inflamed passions among America’s spies.

Let’s be perfectly clear here: The scenario painted by President Trump of his predecessor tasking the IC with wiretapping Trump Tower simply could not have happened without a far-reaching and highly illegal conspiracy involving the White House and several of our spy agencies, above all the National Security Agency. My friends still at NSA, where I served as the technical director of the Agency’s biggest operational division, have told me without exception that Trump’s accusation is wholly false, a kooky fantasy.

In the first place, the White House doesn’t ask for such wiretaps, ever; such requests come directly from NSA, the FBI, or the Justice Department. Involvement of any White House in such highly classified requests would immediately set off enormous red flags in the IC and DoJ due to their glaringly political—and therefore illegal—aim.

There’s a special top secret Federal court that handles such sensitive warrant requests, which are issued under the Foreign Intelligence Surveillance Act of 1978, which allows for intelligence gathering against foreign spies and terrorists. They key words in FISA are the first two: foreign intelligence. Warrants are only issued against foreign targets which are deemed to be plausibly involved in espionage or terrorism against the United States.

However, Americans who call or email those suspicious foreigners may appear in signals intelligence collection, although under FISA their identities are concealed in SIGINT reports in a process the IC terms “minimization.” In other words, your civil liberties as an American do not include the right to communicate with foreign bad guys without possible monitoring. Keep in mind, though, that under FISA the people being targeted are foreign spies and terrorists, not Americans.

Having worked with a lot of FISA collection during my time in the spy business, I can state without reservation that President Trump’s accusations are so inherently implausible as to render them an absurdity. He needs to offer hard evidence for such incendiary claims or back down publicly, preferably with an apology to his predecessor, whom he has maligned without cause.

That said, given the now-known contacts between Team Trump and high-ranking Russians last year, it’s very plausible that NSA and other spy agencies intercepted Kremlin communications which might have incidentally involved associates of our current president. But neither Donald Trump nor his surrogates were being spied on as themselves. If they didn’t realize their shady Russian friends might be considered foreign intelligence targets by NSA and other Western intelligence services, that’s on them.

Where, then, did President Trump get the far-fetched, conspiracy-driven idea that Obama was “wiretapping” him? Like so many other “facts” he cites when they are convenient for him, Trump seems to have picked it up in the far-right echo chamber of Breitbart and related alt-right websites where evidence isn’t required to substantiate claims, no matter how absurd they appear to anybody who understands how our Intelligence Community actually works.

Trump has demanded a Congressional investigation of his allegations regarding Obama, though it’s mysterious why he would want more inquiry into anything even tangentially involving the Russians and 2016. What happens next is anybody’s guess, and will be heavily dependent upon how much public Trumpian drama Congressional Republicans can keep tolerating.

What’s certain is that KremlinGate isn’t going away, and the president’s bizarre efforts to make his links to Moscow a non-story have only made it a bigger one. Now the media is more curious than ever about Trump’s Russian connections, and no amount of chanting “fake news” will alter that. Neither will Team Trump’s obsession with the alleged “deep state” save them from awkward questions. Today the White House will seek to redirect again by talking about immigration and other Trump policy initiatives, hoping the press plays along and forgets about last week. It won’t work. 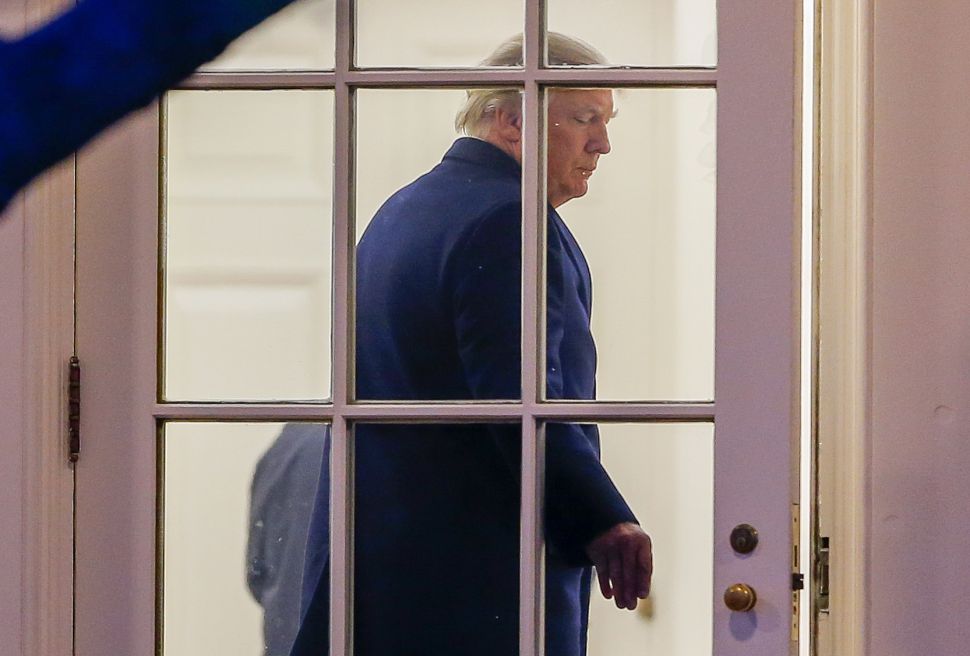