As the Trump administration’s Russia problem shows no sign of going away, protesting presidential tweets notwithstanding, it’s time to think about it properly. Understanding what the Kremlin’s up to helps to see the big picture. This means learning a bit of spy lingo. Espionage, like everything else, has its own culture—including special verbiage—which varies from country to country.

Russia’s espionage culture is unique and in key ways markedly different from how Western countries approach the spy-game. It’s a product of the Soviet secret police, that brutal and cunning force, and it’s no accident that Vladimir Putin’s spies proudly call themselves Chekists today to commemorate them—just as they did in the days of the KGB. “There are no ‘former’ Chekists,” as the KGB veteran Putin has stated, and this attitude permeates his Kremlin.

The threat to our democracy posed by Moscow’s spy-games won’t recede on its own. As Rick Ledgett, NSA’s straight-talking deputy director, stated last week, “This is a challenge to the foundations of our democracy.” He went on: “How do we counter that?” adding, “What do we do as a nation to make it stop?”

This first thing we must do is gain a reality-based understanding of the SpyWar we’re in with Moscow. So, let’s walk through a few of the most important Russian espionage terms to shed some light on what’s really going on between Washington and the Kremlin.

First, there’s provokatsiya (provocation), which is the cornerstone of the Russian espionage worldview. This part of Kremlin spy culture is older than the Bolsheviks, dating to the late Tsarist era, when Russia invented the modern intelligence agency to fight anarchist terrorists.

Provocation is complicated, but at its most basic involves secret acts to confuse and dismay your enemy. The recent antics of Devin Nunes, chair of the House Intelligence Committee—positing conflicting and unsubstantiated allegations of malfeasance by our spy agencies—are a classic provocation designed to divert attention from the White House as its Russia crisis mounts. Regardless of whether anyone in Russia has a hand in this, the Kremlin surely approves.

Provokatsiya gets more complicated and nefarious from there, with the ultimate aim of turning the tables on your enemy and defeating him detail—before he realizes what’s happened. As I’ve explained, this involves a lot of shady stuff such as:

Taking control of your enemies in secret and encouraging them to do things that discredit them and help you. You plant your own agents provocateurs and flip legitimate activists, turning them to your side…While this isn’t a particularly nice technique, it works surprisingly well, particularly if you don’t care about bloody and messy consequences.

Moscow is alarmingly forward-leaning about provocation, and the Kremlin’s traditional devil-may-care attitude about these dirty tricks means it’s a safe bet that when you encounter rabid anti-Putin activists, there’s a solid chance some of them are secretly working for the Russians.

Next there’s konspiratsiya (yes, conspiracy), the Russian term for what we call espionage tradecraft. This is the clandestine nuts and bolts of recruiting and running agents, placing targets under surveillance, running covert action and whatnot. While the word conspiracy has a negative, tinfoil-y connotation in the West—where anything which polite people don’t wish to ponder can be brushed off as a “conspiracy theory”—Moscow feels differently.

Russians accept that conspiracies exist because people conspire—and what’s more conspiratorial than espionage, the vaunted second-oldest profession? The Kremlin is notably cold-blooded about konspiratsiya, being willing to sacrifice even highly valuable agents when something better comes along. Moscow does not believe in tears, as the saying goes.

A related term is kompromat (compromising material), which is used to coercively recruit people to spy for Russia—and to keep already recruited agents in line. Thanks to the salacious Steele dossier, with its allegations of Moscow possessing not-safe-for-work kompromat on Donald Trump, lots of Americans know this unpleasant term now. The fear of kompromat is almost as potent as the embarrassing photos or videos themselves, as Russians know only too well.

Given the murky finances and messy personal lives of numerous members of Team Trump, it’s a safe bet that the Kremlin has its hands on juicy information which, if revealed, would cause problems. That said, there’s no reason to think Steele’s X-rated assertions are true, nor that Moscow needed kompromat in this operation. President Trump’s inner circle seems perfectly willing to parley with Russians, particularly powerful and rich ones, without any hint of coercion.

Dezinformatsiya (disinformation) is another Russian term once known only to espionage mavens but which, thanks to the events of 2016, now falls off the tongue of average citizens. Deza, as it’s called for short, is the original “fake news,” an alluring amalgam of fact and fantasy—much of it unverifiable—designed to confuse readers and shift political discussions.

Peddling deza is much faster and easier these days, thanks to the Internet and the rise of fringe websites, but there’s nothing new about it. It was part of the KGB’s Cold War arsenal, when Chekists faked documents and disseminated lies through trusted Western journalists, in order to embarrass the West, especially NATO and the United States. Some of these vintage disinformation fables are still with us, despite being debunked decades ago.

Deza, however, is only one component of what the Russians call aktivniyye meropriyatiya (Active Measures), which is a vital Chekist concept lacking a precise Western equivalent. It roughly aligns with our notion of political warfare, albeit with a highly clandestine side. The bureaucratically bland-sounding KGB definition of Active Measures covers a broad brush of nefarious spy-games:

Agent-operational measures aimed at exerting useful influence on aspects of the political life of a target country which are of interest, its foreign policy, the solution of international problems, misleading the adversary, undermining and weakening his positions, the disruption of his hostile plans, and the achievement of other aims.

The Kremlin’s 2016 brazen operation to harm Hillary Clinton and help Donald Trump was a classic Active Measure, relying on cyber-espionage to steal emails, then employing a Kremlin front to disseminate them to the world. As I recently explained, this successful spy-game was notable only for its astonishing lack of subtlety, with Putin’s special services seeming to want us to know what they were doing.

Overall, however, the on-going Russian clandestine operation to subvert our democracy falls under the rubric of what Chekists call kombinatsiya (combination), meaning the coordinated application of provocation and Active Measures in order to influence political outcomes. Pushing disinformation is perhaps too easy these days, and now the FBI is investigating the Kremlin-to-far-right-websites deza loop which has become commonplace in America.

Weaponized lies only get the Russians so far, though, and here’s where provokatsiya moves the spy-game further down the field. To pull off provocations, however, Moscow needs operatives, and it’s evident that members of Team Trump possess links to Kremlin agents and cut-outs. There’s no doubt the FBI is unraveling all that right now in its investigation of KremlinGate.

Fully understanding this complex Russian operational game will take months, maybe years, but Americans should feel confident that the FBI, with help from NSA and other secret agencies, will eventually get to the bottom of the kombinatsiya that Putin has inflicted on our democracy.

What ought to worry anybody caught up in all this is the Russian term mokroye delo (wet affairs, commonly styled as “wetwork” in the West, referring to bloody hands), meaning assassinations. Putin’s regime has embraced wetwork in a manner not seen in the Kremlin since Stalin’s time. His assassins have taken out defectors and enemies all over the world, including in the West.

The most infamous hit was the notorious polonium-210 murder of the defector Sasha Litvinenko in London in 2006, but several other Russian émigrés on Putin’s “enemies list” have met unnatural ends in recent years—to say nothing of the numerous regime opponents who have been murdered in Russia.

Wetwork may even reach the United States, as testified by the brutal and mysterious death of Mikhail Lesin, a former member of Putin’s inner circle, in the heart of our nation’s capital in late 2015. Moscow coldly disposes of people it no longer needs, who may possess kompromat on the Kremlin. Last week’s brazen murder of a Russian dissident politician on the streets of Kyiv, in broad daylight, sends a clear message that Putin will settle scores and tie up loose ends wherever he needs to. 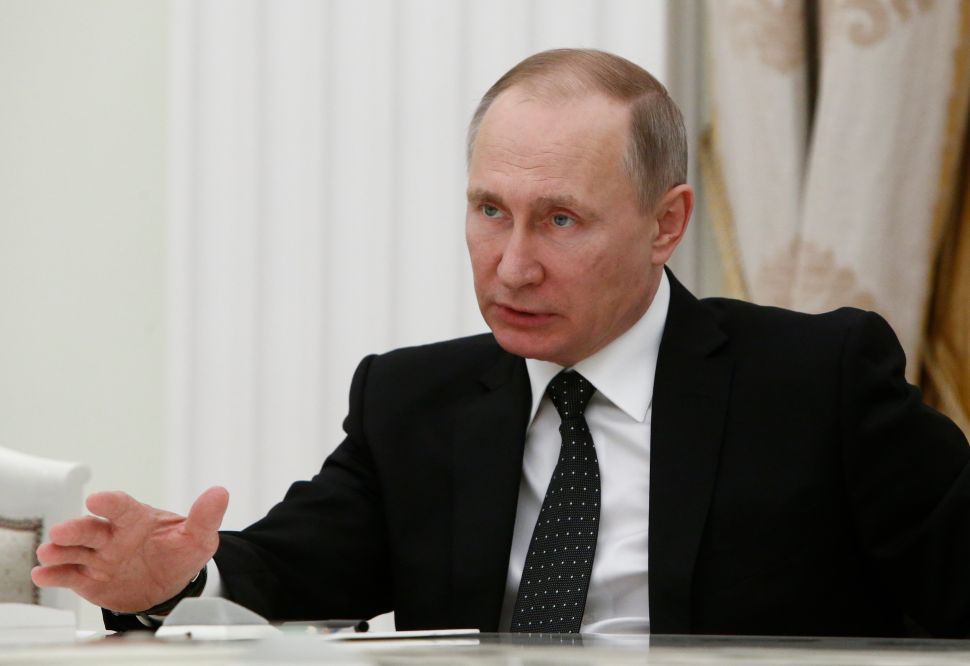