Welcome to Last Week Was a Beta, our Monday look back on the big stories in tech during the prior seven days.

The Trump administration banned carrying electronics larger than a cell phone onto flights into the US from eight countries in the Middle East.  ZDNet among others called it an electronic Muslim ban. If the administration can’t outright prevent people of Islamic faith from entering the country, it seems determined to make coming here more aggravating.

Late in the week, internet service providers made major progress in their quest to continue selling data about what their users do online to third parties, including browsing data, as Ars Technica reported, despite the fact that consumer trends have moved in favor of greater privacy.

Whatever an ISP says about personally identifiable information getting special protection, ignore it. With a few data points, everyone is easy to identify. Though Congress can’t wait to sell internet users to the highest bidder,  states have shown more willingness to curtail data predation, as The New York Times reported.

Hall & Oates warned us about all of this a long time ago:

These are both stories about the ever-increasing importance of one’s identity. It gets harder all the time to go through life anonymously. For most people in the West, that mainly means being subject to ever more specific ads, but who’s to say data brokers won’t look to open increasingly more invasive markets with law enforcement or human resources departments?

Advertisers always cared about who you are, but they had to approximate in the old days. They knew, for example, that several specific demographic profiles read The New Yorker, and if one of those profiles strongly fit a market segment a firm wanted to reach, they’d buy an ad there. Of course, that also meant they’d waste the ad on the other demographic profiles, but there wasn’t anything else they could do.

Today, when (say) a Snickers ad shows up next to an ISIS video, everyone knows that it’s not like the brand specifically requested putting its ad next to that kind of video, like it would have in the print era. That’s not how things work anymore. Snickers’ ad agency tells algorithms the sort of person they want to reach and it finds them wherever they browse. Still, last week, brands started to freak out about their ads showing up in the worst corners of YouTube. In a related but longer running story, brands have also been pushing to keep their ads off the alt-right media site Breitbart News.

Turns out, that’s surprisingly tricky when they buy ads against consumer profiles rather than content profiles. It’s not that these brands want to sponsor nasty stuff. They do so inadvertently due to the new mechanics of advertising, but the optics became bad when activists took note.

Looking at the story from the perspective of how it actually works is more illuminating. If you see an ad on Breitbart, it wasn’t following Breitbart. It was following you. The tracker that picked the ad used information you thought private (what you had looked at, where you looked at it, your age, income, etc).

If the idea that a private profile like that could ever have larger implications than banner ads seems crazy, though, consider the case of  Larry Garfield, a developer who’d been contributing coding time to Drupal, one of the major open-source content management systems. He was ousted from the Drupal community in a decision that became public last week because the founder didn’t like the kinds of sex parties he went to, as TechCrunch reported.

Garfield had never been open about these proclivities, but consequences cascaded once it came to light. Drupal founder Dries Buytaert explained as much as he could about the decision to ask Garfield to leave in a blog post. Nadia Eghbal wrote a Medium post that compared the move to the same kind of lifestyle policing we’ve known so long from the family values crowd.

It’s an extreme case, of course, but imagine a future when an employer could know a potential hire still watches Samurai Jack in his 30s and decides he can’t be serious enough. Or imagine cops who discover that a someone spent a lot of time browsing luxury blogs and decided to move her up on the list of suspects for a burglary. The list goes on and on.

Tech news wasn’t entirely bleak, however. The future looks bright for the world’s newest personal gaming device. It turns out that the 25 year old game franchise Legend of Zelda still knows how to crank out hits. Legend of Zelda: Breath of the Wild has gotten raves across the blogo-content-sphere, which bodes well for Nintendo’s console-portable hybrid, The Switch (a system that can maybe save your relationship). In fact, IGN reported last week that demand for the device has outstripped supply.

BREAKING: Self-driving Uber vehicle on it’s side after a collision in Tempe, AZ.

And it wouldn’t be a tech news roundup without Uber (whose chief rival Lyft has recently piled onto its troubles). One of its self-driving cars in Arizona got into a serious collision this weekend in Arizona, as The New York Times reported. No one was hurt, but Uber’s vehicle flipped on its side, and its autonomous testing went on pause while it assessed the incident.

The bright spot for the biggest unicorn? All signs suggest that for the first time in several weeks, this particular disaster wasn’t the ridesharing company’s fault. 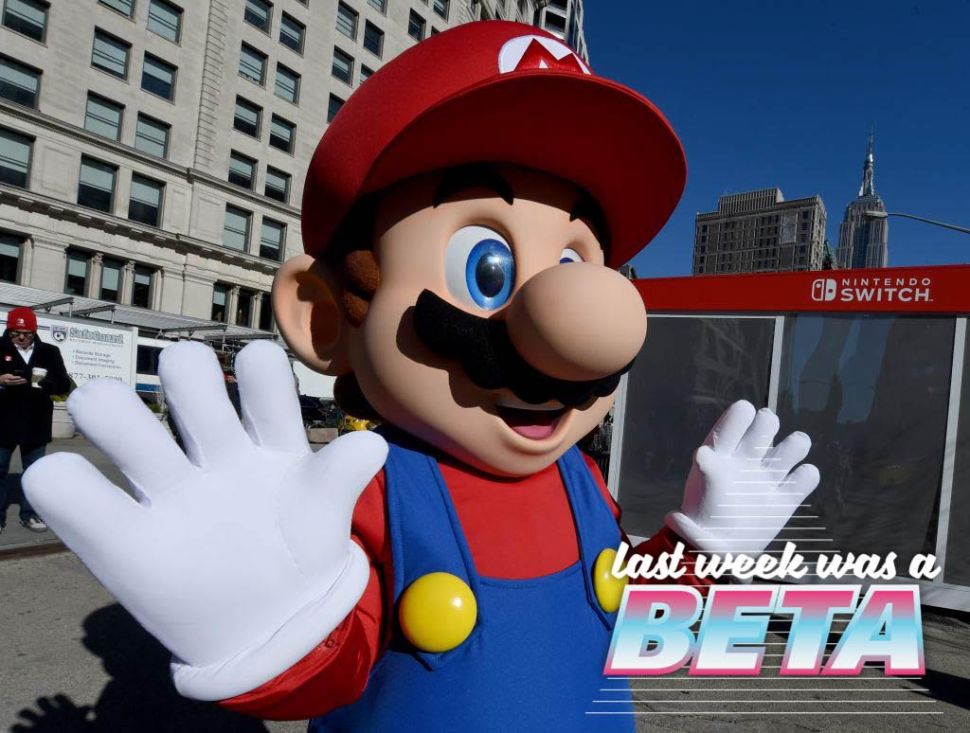