Boring, derivative, and infuriatingly illogical, Lavender is a ghost story with no thrills, no surprises, and no sense.It’s the kind of  bomb that gives Canadian films a well-deserved reputation for second-rate sloppiness.

The slow-start premise, set in 1985, is about a girl named Jane Ryer whose family is mysteriously massacred in a farmhouse, leaving her the only survivor. The case is never solved and Jane grows up to be pretty, vapid Abbie Cornish). Twenty-five years later, Jane is a photographer obsessed with taking pictures of old houses and the people who once lived in them. She is also married, with a husband and daughter of her own, and a crippling case of  amnesia. When an automobile accident rattles her brain loose and lands her in the hospital, she decides, like Gregory Peck in Spellbound, to consult a psychiatrist (Justin Long) who coaxes her to remember. Soon a mysterious box arrives brightly wrapped with a red ribbon and inside there’s jack like the ones she used to play with as a child. On her way back to the old farmhouse where the mass murders occurred, she looks up her estranged uncle (a wasted Dermot Mulroney) for some hint of what  happened to her family. He hands her the key to the creepy old shack and says, “Only you knows what really happened in that house.” And nobody connected with  this hapless fiasco is about to explain it to the rest of us.

The balance of the movie is about Jane’s confrontation with an uninspired variety of odd occurrences that threaten her sanity and her family’s survival: doors that slam shut, a red balloon floating over the cornfield attached to  a rusty key, hands that reach out from beneath the bed to grab her by the foot. Clues to her past, her memory and the crime scene keep arriving in more mysterious gift boxes. There are red herrings galore, ghosts on the stairs and behind the curtains, and more holes in the plot than a sieve. Nothing is what it seems and none of the characters are who they are supposed to be. Even the shrink is a figment of Jane’s imagination—a substitute for her dead father. Who is sending the boxes? What does the key unlock? Why does Jane keep trying to strangle her own child? Why does the song lyric “Lavender blue, dilly dilly…”( hence the title Lavender, get it?) send Jane into  a paroxysm of terror? If this thing was directed by Alfred Hitchcock, Ingrid Bergman would show up and save the day before the dark shadow  climbs the stairs with a hammer in his hand. But directed by a man with the hyphenated name Ed Gass-Donnelly, who wrote the idiotic script with Colin Frizzell, it’s all rather silly and ridiculously incoherent, and instead of shrieking with horror I predict you will spend a vast chunk of the show looking at your watch to see how much time you’ve got left on the parking meter. 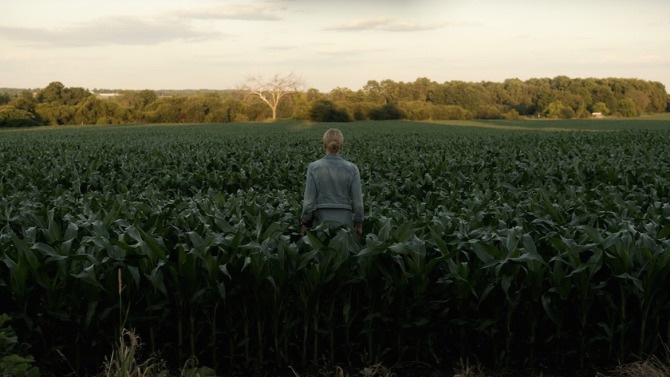