Just how do genetics, the perception of the strength of genetics and the will to overcome things out of your control play into the way you live your life?

Under the use of the harsher term “rape gene” this is the question explored on this episode of SVU. With the usual investigative complications, the underlying theme of this installment combined a little bit of the “nature vs. nurture” debate, some self-exploration and just the right amount of legal maneuvering to chip away at the overall concept presented.

The set-up seemed sort of standard – a woman is hit on by a guy, she tells him no, a little while later she’s raped. Clearly, we’re supposed to think it was rejected dude, but this being SVU, if we know anything at all, we know that nothing is as it seems. Sure enough, the victim, Jessica, points the finger at the guy who was overtly hitting on her, Rodney. But after some detective work via surveillance cams and such, Rodney is cleared of any wrongdoing.

Thank goodness for DNA. The findings in the lab lead the squad to an incarcerated fellow because the DNA indicates that the perp is someone in his family. Using a little ‘bad cop’ trickery they get him to give them the name and location of a male relative named Nick.

When Rollins and Carisi roll up on Nick in his office he really doesn’t hesitate in admitting that he raped Jessica, but he does use the unique excuse that he did it because being a rapist is in his genes.

The whole “I’m a rapist because it’s in my genes” thing freaks Olivia out since Noah’s father was a sadistic rapist who trafficked women. So, she immediately rushes to her pal Dr. Lindstrom who reassures her that Noah will not turn into his father.

He also reassures her that her moral compass and belief system are stronger than her father’s DNA and this is the reason that she has not, and will not, follow in her father’s violent footsteps. And, he confirms what Olivia has said all along to Nick, and anyone else who will listen, that there is no such thing as a “rape gene.”

Just as the hammer is coming down on Nick in the interrogation room, he tries to swing a deal in that he’ll provide the name of a serial rapist for a lighter sentence.

He points the team to a sort of rapist support group that’s being held in what appears to be an abandoned warehouse. Just as he’s about to get a lowlife named Sam Dalton to confess to three rapes, another group member suspects that Nick is a snitch and pulls a knife on him. As things are quickly going south on the whole operation, Rollins and Carisi burst in and gather up all the group participants.

Dalton quickly secures a lawyer but all three victims ID him and his DNA is a match as well. But, complications arise when the shady therapy group is deemed legit by a judge and therefore anything Dalton said in the group is inadmissible in court as is the victim’s IDs and the DNA evidence. (Barba is hopping mad about this!)

Sgt. Benson has the brilliant idea to hit up one of the other group members for information, a fragile young man named Will. Will had been using the group to help him because his father was a rapist and he was certain he was headed down the same path.

But, getting Will involved turns out to upend his world and suddenly he’s on a rooftop threatening to jump. As Rollins and Carisi try to stop him, Benson swoops in and gives a speech about how having a rapist as a father doesn’t make you who you are. She tells Will about her own situation, of being a child of rape, and as he’s digesting what she’s said, it’s Carisi who swoops in and pulls Nick from the ledge, enveloping him a bear hug.

In a final courtroom showdown, Will’s able to be strong and disclose that Dalton told him, in a setting outside the therapy group, how he’d raped the three women.

After some banter between Benson and Barba on the courthouse steps, Benson has a tender moment with Noah, telling him that no matter what she’ll always love him.

As a whole, the episode, while pretty icky, did explore the “born this way” element in a unique fashion. Yes, it was jarring every time someone said “rape gene,” but haven’t the detectives over the years often mentioned that statistics show that if someone is abused they have a high statistical chance of being an abuser? So that does beg the question — is there that same kind of statistical chain for rapists?

This is a question that needs to be asked, but does anyone really want to know the answer? Apparently, the answer to that question is yes, for a variety of reasons, including helping people like Olivia and Will, who through no fault of their own, will continue to question themselves given their connection to their paternal DNA. Perhaps new therapies for the offspring of violent offenders can be developed with more knowledge about genetics in general. It’s a bit hard and scary to have to think this way, but again it’s something, that given that a certain percentage of society has a penchant for violence, seems necessary.

A few notes about this episode and then a possible bombshell that may change the way some fans view the series….

First, on a lighter note, you have to admit that the first time Nick said, “I’m a rapist, it’s in my genes.” Didn’t you kind of hope someone would crack, ‘Yeah, well you should have kept it there, douchebag.” That seems kind of like something Fin or Carisi (or dare I say Elliot) would say, right? Right?!?

Now on a more serious note, since it was established that Rollins knew about Liv’s father and Carisi didn’t, wouldn’t it have been really great to see Carisi’s reaction to Olivia’s speech on the rooftop? Yes, it wasn’t about him, it was about her, but it still would have been nice to see a bit of how he was taking in this news about his sergeant, and friend, as she was saying it.

Toward the end of the episode, it was interesting that there was really no jury verdict per se. The courtroom portion ended with Barba’s closing argument and then it was quickly onto Benson and Barba discussing the case on the courthouse steps. That was actually a nice deviation from a traditional episode. The guilty verdict didn’t need to be read out loud, we got it from Benson and Barba that that was the end result.

Olivia’s moment with Noah was touching and it was quite wonderful to see Dr. Lindstrom again, but having said that….and here’s the bombshell…. if some deleted scenes from a season two episode had aired, Olivia’s time with Dr. Lindstrom, in fact, Olivia’s entire life path, and a major portion of the whole series would have all been decidedly different.

It isn’t common knowledge, but there are seven minutes of a deleted storyline from the season two episode “Taken” that, if aired, would have irrevocably changed Olivia Benson’s life.

The sequence features Olivia making arrangements for her mother’s funeral. While doing that she discovers, via a safety deposit box and her mother’s friend, who her father is. And, she meets him.

Yes, in a dropped storyline that was actually shot, Olivia Benson meets her father.

Isn’t it curious that because those scenes never aired, Olivia’s background, as originally envisioned – the child of an alcoholic mother and a product of rape — has continued to fuel her insecurities and influence her decisions for so many years?

In a way, the discovery of this information is apropos of not only this episode but of SVU as a whole, a series known for its twists and turns.

Given this information, and the path that the series has taken for 18 years, what could possibly shock us next on SVU? Fortunately, that’s a question that continues to be asked — sometimes answered, sometimes not. But that’s what makes it all worth it in the end, right? 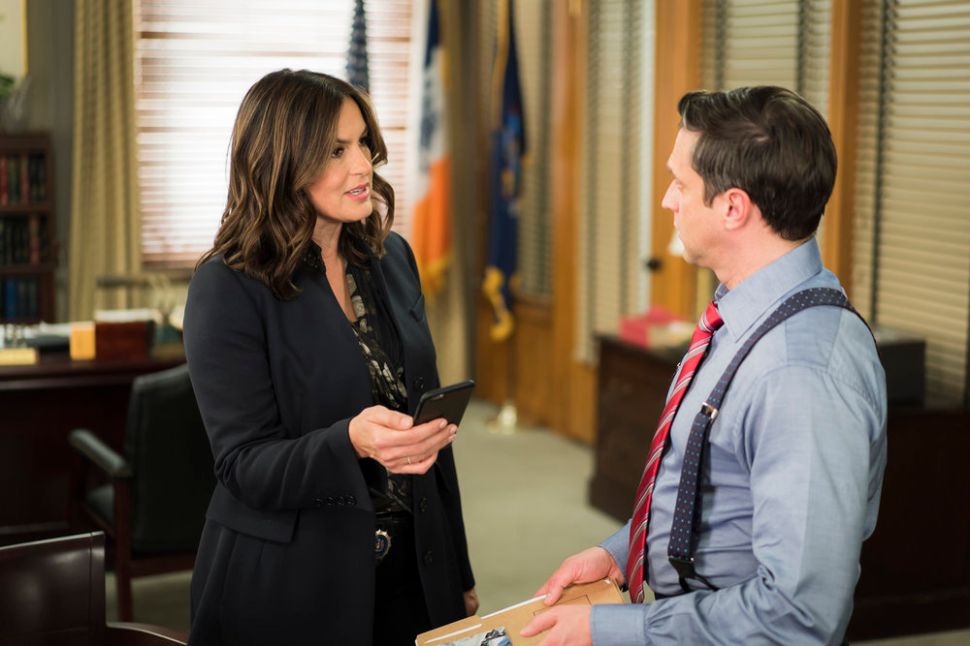