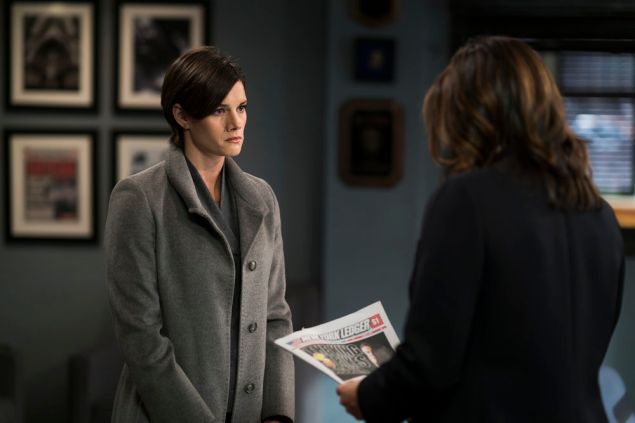 SVU takes a swing at leveling the playing field, in more ways than one.

At a swanky party, corporate exec and non-drinker Zoe promptly turns down a drink offered by one of her clients. (This action makes you think things aren’t going to go awry, but alas, this is SVU so something HAS to go awry, right?)

Anyway, when Zoe passes on a glass of super expensive wine offered to her by her billionaire client, Eli, Zoe’s boss Roger tells her that the three rules of Wall Street are: never tell the truth, never use your own money, and never say no to a client.

Trying to play the corporate game, Zoe gives in and has a drink with Eli.

Cut to the next morning, a shaky Zoe runs into Eli in her office and he tells her he had fun the night before, blocks her way, and also plants a creepy kiss on her cheek.

These actions are probably the reason that Zoe decides now is the time to rush off to the SVU squad room where she immediately, and in detail, tells Sgt. Benson how Eli raped her at the party.

Within those details, she tells Benson that she told Roger and he cautioned her against doing anything.

The detectives quickly descend on Zoe’s office where they attempt to talk to Roger, but are blocked by the firm’s attorney.

When they question Eli he says that the sex was consensual. He even produces a flirty email that he claims Zoe sent him the morning after the party. Zoe vehemently denies sending the message.

Doing their due diligence with the investigation, the detectives dig up another woman who was paid $20,000 by Roger to go the party with the understanding that she was to sleep with Eli. She says that she was happy when she realized that someone else did her work for her.

Next, the detectives uncover a woman who was raped by Eli three years earlier, but he paid her off and she signed a non-disclosure agreement so she can’t talk about the specifics of what happened.

Pursuing another angle, the detectives find Eli’s drug dealer who, it turns out, witnessed the assault, even hearing Zoe specifically say no to Eli.

The case takes an interesting turn when Zoe gets an amazing job offer with a different firm – one that will pay her $5 million guaranteed for at least four years. But, there’s a huge catch, she has to keep a low profile, meaning if she takes the job she can’t testify against Eli.

It soon comes to light that Eli (of course) negotiated the new job for Zoe, promising the new firm that he’d give them his business if they hired Zoe.

In the meantime, it turns out that Roger, who Zoe considered a mentor and a friend, sent that email to Eli from her computer the morning after the assault, and has basically been sabotaging her all along.

After a talking to from Benson, Zoe decides to forego the new job and take the stand to testify against Eli. She confidently tells everyone in the courtroom about the assault and when asked about the 20 million that she turned down in order to give her testimony she says that she did it because she’s not going to let Eli take her dignity again.

As the episode faded to black, some questions remained: Was Eli found guilty, will Roger face any jail time and where does Zoe go from here?

Like in another recent episode, “Genes,” the audience wasn’t privy to the verdict in this case. Unlike the last installment of SVU, in which Barba confirmed that there had been a conviction by the jury, the audience was left wondering about Eli’s fate. But, one could argue that a guilty verdict was really a foregone conclusion and that this wasn’t so much about that outcome as it was about Zoe standing up for herself and nailing the rich mogul by not letting his money make him above the law.

Still, it would have been nice to see Zoe’s reaction to a guilty verdict. If not that, one scene that would have been welcome could have featured Benson and/or Fin going off on Eli. Something to the effect of, ‘we’ve seen your kind before. We know how you operate and this stops here.’ This team has an extensive history with wealthy men who use their money to try to get away with whatever they want. It would have been great to see the team get really angry that it was happening yet again.

And what about Roger? Sure, there were some side remarks that they got him on obstruction of justice, etc. But again, a scene in which Zoe confronts him about what he did would have been appreciated. She stated that this man was a mentor and someone she considered a friend. All the ladies out there, in the workforce having a male ally is important, right? We’re so often not heard unless what we have to say is filtered through a man that good, trusted female/male working relationships in the office are essential.

Please note, that it pains me to no end to have to say that this is something, the women not being heard issue, that actually happens every single day but it’s absolutely true and this is another issue that it seems we’re seeing more and more in every facet of business, and especially government, right now.

Which leads to Zoe and her future. What’s happening here, and this too is difficult to say, but not only was Zoe assaulted physically but this is a fine example of how something like this will affect her whole life, probably in ways she hasn’t thought of yet but will soon come to see. It seems like right now, she’s thinking a lot about how she’ll have to rebuild her career, and she’s absolutely right about that. But, in doing that it’s not just about finding another job, but about learning to trust again – her own judgment and in the others around here. And, again being a woman in the workforce, there are all those other obstacles as well. When a woman is forced to leave a job, she loses a lot of workforce equity that men don’t understand. A man coming into a new job is expected to be a certain way. He’s expected to lead right away. Women, put in leadership or client-facing positions, are often tested to ascertain the manner in which they will lead. In short, will she be considered appropriately forceful to get what she needs or will she be a bitch? And just who judges in what category a woman falls? She, like every other woman, will have to build herself and her workplace relationships from the ground up yet again. Knowing that all of this is ahead for Zoe made the final choice she made and what she did in court that much more meaningful.

In the end, Zoe did the exact opposite of all of those rules Roger tried to school her on – she told the truth, she gave away a lot of her own money, and she unequivocally said no to a client. In the future, it would be great to see Zoe make herself billions but maybe, if this is truly the way Wall Street works, she might want to rethink her career path.

It’s reasonable that this story had to be told in this manner – showcasing a rich guy trying to buy his way out of a rape charge – because that’s the nature of SVU; it’s a show about assault and special victims, but it’s sort of ironic that buried in there is a lesson about women in the working world and all of the seen and unseen obstacles this gender faces every day. While this aspect may not have been completely in the forefront, as least it was nice to see it included.

And, it felt sort of awesome to see, for once, the assholey rich guy who thinks he can get away with anything go down. While this overall scenario feels very real and like something that’s happening on a daily basis in the world right now, the outcome shown here – a man who has unlimited power and resources having to actually pay for his unlawful actions – well, now that feels like something that’s NOT happening at all in the real world right now, and it was very pleasing to see, even if it was only on a fictionalized TV show. 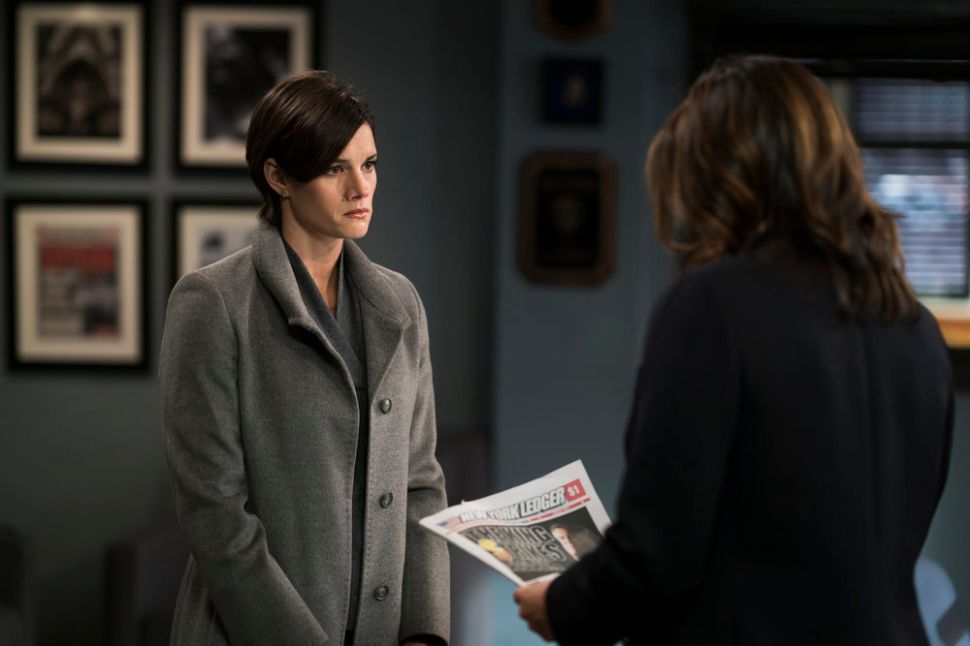