In an uncharacteristically quiet scene during Legion‘s season one finale (“Chapter 8“), twitchy mega-mutant David Haller (Dan Stevens) stands on a dock and explains to the body-swapping love of his life Syd Barrett (Rachel Keller) his fear that the powers manifesting themselves over the last eight episodes are, as he originally thought, schizophrenia. His reasoning? The events that interrupted his life at Clockworks Psychiatric Hospital were too basic, too humanly relatable to be true:

That’s the trick, the mind-killer. Your disease convinces you you don’t have it. So for example, one day, in the hospital, you meet a girl. And she has some friends and they tell you you’re not sick, you have superpowers. And more than anything you want to believe it, because that means you’re not crazy. That means you can fall in love, and live happily ever after.

What David also accomplished here is succinctly describing a story that some critics called “designed to foil attempts at cogent summary.” But, boiled down, not much actually happens outside of David’s head other than his own fevered synopsis: Thanks to Syd and her pro-powers Summerland compatriots, David learns he is an exceptionally powerful mutant who has a parasite named Amahl Farouk leeching off his powers who needs to be expelled before David can live a next-to-normal life.

But that’s the key to Legion, and the reason showrunner Noah Hawley’s entry into the X-Men canon is unlike any comic book show before it, why it’s one of the most creatively impactful new series in years. Legion may be a mindfuck that literally includes characters fucking inside their minds but in the end, it told a simple story; about identity, about finding the one voice inside your head that actually belongs to you. It just happened to tell that story through time shifts, through dreamy montages, through flashes of color and sound that–occasionally for entire episodes at a time–took place solely inside its characters’ psyche, be it in the form of a hospital wing or floating ice cube at the time, where identities shifted, storybook characters leapt from the page wielding butcher knives and new love could only be properly expressed through choreographed dance.

Those that dismiss Legion‘s oddball diversions as “cheap tricks” are forgetting the comic books that eventually became billion-dollar juggernauts used to cost just a nickel. But at their heart they told human stories, inked, colored and heavily exclamation-pointed to appear larger than life. Sure, Peter Parker is Spider-Man, but he’s also an awkward high-school kid from Queens. Bruce Wayne is a billionaire that beats muggers with his fists while wearing a bat costume, but he’s also a study in emotional isolation. Superman is an alien from another planet who can lift an oiler tanker above his head, but this means he’ll never be at home with the world he’s compelled to protect.

Legion has more in common with these stories than anything put out by the money-churning big screen comic book factory, whose idea of changing it up is aping a special effect Christopher Nolan used in 2010. Entries like Legion (and, similarly, Logan) seem like an antidote to the Marvel Formula, which prides itself on going capital-letter Big while refusing to stray from the path already well-worn by Iron Man’s boots. Give me simple innovation over an EPIC paint-by-numbers exercise. Show me relatable characters, not gods. Replace hordes of faceless foot soldiers with one, single devil with yellow eyes.

The alternative is a series like Netflix’s Iron Fist, a comic book dud that took so few risks I’m convinced Scott Buck oversaw it while wearing floaties. Because what I am not arguing here is that Legion isn’t weird. It is, it’s weird as shit, occasionally confounding and filled with stylistic flourishes that, on first glance, seem to be pulled from a magician’s top hat just for the sake of being strange. Legion uses its weirdness like a megaphone, amplifying (mutating?) ideas we encounter daily into something more than human, as only the deftest comic-book storytelling can.

Take Cary (Bill Irwin) and Kerry (Amber Midthunder) Loudermilk, one of current TV’s most genuine, platonic friendships between a man and a woman, just that much more deeply felt because the two happen to share a body. Kerry’s late-season accusation, “I needed you, and you left me,” comes across as legitimately wounded because to separate the Loudermilks is to actually rip them apart.

Take Dr. Melanie Bird (Jean Smart), or her lost-in-mind-space husband Oliver (Jemaine Clement). The fact that Oliver can’t remember the face of his own wife, much less mastery of simple sentences, isn’t any less of a dull ache because it comes from the mouth of a superbly ascot-ed Clement, maneuvering back to reality through a faery-land astral plane in a scuba suit named Jules Verne.

Take the wonderfully awkward lakeside conversation between Syd and David in “Chapter 3,” which reads like the sweet naivety of a tentative young couple coming skin-to-skin for the first time, an oddly endearing take on the birds-and-bees that just so happens to also concern a legitimate swapping of bodies. It was, at once, Legion‘s most human and superhuman interaction.

Or, hell, just take the entirety of “Chapter 7.” For my money, Legion‘s penultimate season one episode (directed by Dennie Gordon and written by Jennifer Yale) was where viewers bought in or noped out for good, an installment that quite literally put the real world on hold for a madcap, nightmarish trip into the Farouk-controlled mind of David Haller. The episode culminates at a tangled crossroads of sequences; David Haller repeatedly bursting through an identical hallway of red doors in an attempt to regain control of his own mind, Oliver Bird weaving a shield from thin air to protect David’s physical body and Aubrey Plaza putting on the performance of her life as Amahl Farouk’s Lenny Busker form, stalking Syd and Carrie wild-eyed through a fabricated Clockworks-turned-silent-film.

“What is gained by having the fight play out like a silent movie, shot in black and white with dialogue printed as intertitles and Lenny gussied up in Charlie Chaplin’s Little Tramp meets Johnny Depp’s Edward Scissorhands drag?” writes Sean T. Collins, reviewing “Chapter 7” for the New York Times. “Here it undercuts the tension and terror without providing much compensatory value.”

I’d argue that it isn’t about what is gained here, but what is lost. It’s as jarring and disorienting paced a sequence as any on TV, with the operative phrase being the one that is flashing above: “The monster arrives.” By taking away any comfortable footing in reality the audience may have, much less basic TV formula, by upending any sense of expectation, Legion is able to simulate real life terror. The monster arriving, be it physical or in your head, turning the world into black-and-white silence.

Which brings me back to David’s finale speech on the Summerland dock, which cuts away momentarily to he and Syd inside The White Room, a psychic construct and the only place the two lovers can safely touch. It reminded me of one of my favorite, subversive bits of comic-book storytelling in Scott McCloud’s The Sculptor. The comic-book legend’s massive graphic novel is the story of an artist–also named David–who makes a tragic deal with Death itself. The first time David meets the Grim Reaper, the two touch briefly and David is treated to a vision of the afterlife…

“That complete absence of any kind of mark is a kind of anti-visualization of a thing that cannot be visualized. For me that’s the core of it, trying to show something that cannot be shown,” McCloud told me when I asked about that page. If The Sculptor was being read on a tablet, he said, that page would ideally turn off the device for a moment. If it were a movie, the film would temporarily tail out. “It’s the absence of media that seems to be the only credible way to portray the absence of consciousness.”

Which is why Noah Hawley and Co. deploy every visual trick and storytelling device in the book, along with a few that decidedly are not. Because Legion, essentially, is an attempt to portray the exact opposite idea as The Sculptor; not an absence but an overabundance of consciousness. And the only credible way to portray an overabundance of consciousness is to shift time, delve into the astral plane, tell your story in both rainbow pastels and deep greys, through both explosions and silence, all to dig into the simple question at the center of Legion‘s madness: Who am I, really?

Judging by the finale’s after credits scene–David at his most relaxed, suddenly whisked away by what looks a hell of a lot like a Poke Ball–it’s a question still without an answer. Or, as David Gilmour croons in Chapter 8’s Pink Floyd song cue so on-the-nose you could almost call it an inevitability:

Dig that hole, forget the sun / And when at last the work is done / Don’t sit down…it’s time to dig another one 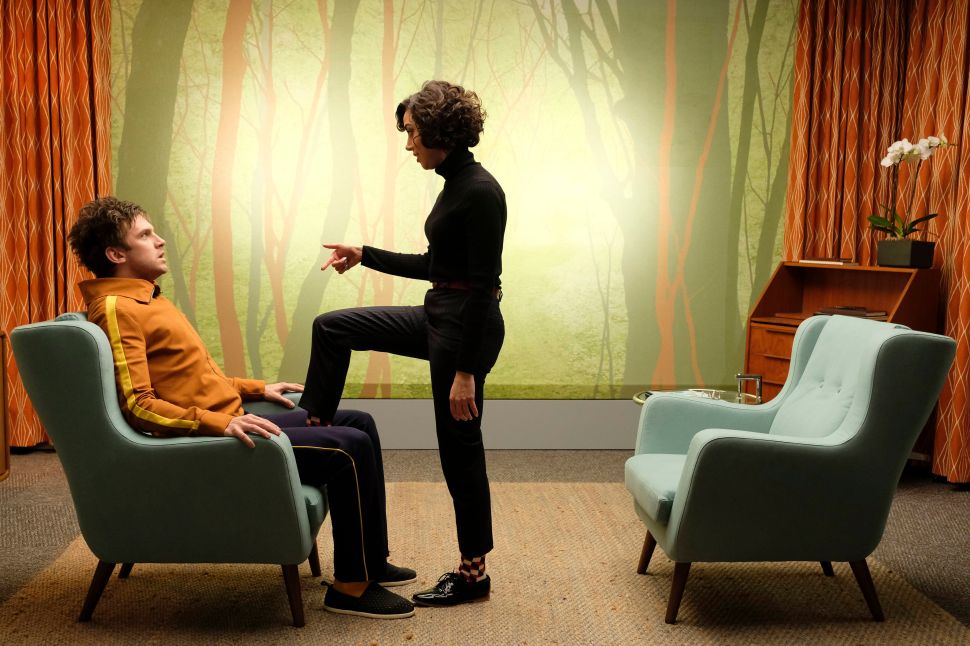