Any open mic comedian can tell you that comic book legends exist to be deconstructed. How does no one pick up on Clark Kent’s physical similarity to Superman? Isn’t Batman just a rich maniac? With only six hours and the most meager possible amount of help from the already-existing X-Men universe, Legion has already created a cast of characters and host of circumstances that it can find delight in taking apart.

Chapter Six sees all of our heroes and one of our villains without any mutant powers or any facilities in which to study mutants– in other words, the whole premise of the previous episodes has been (seemingly, for the moment) erased. Lenny, the shapeshifting, chaotic evil being that inhabits David, is now a doctor administering therapy to them in a mental institution.

Thus, Melanie is just in denial of her husband’s death, not researching how he could have built an ice cave to disappear into; Cary and Kerry are just codependent, although whether they still have the same last name or how they know each other is unclear; The Eye is just a horrible man. Take away what’s ostensibly exceptional about someone and he or she is just neurotic, delusional, often surrounded by enablers.

Amy is now an abusive nurse, which is a good hint that this is the delusion, and not David’s previous life, Summerland, etc: nobody would have imagined her as a beloved family member who needs rescuing, but Lenny would have remade the original Amy into a mean person for the sake of fucking with everyone. None of either reality can be any one person’s delusion, though, I don’t think, because we see too many individual storylines where characters are apart from each other.

David has a very similar conversation to the first one we ever saw him have with Lenny, but with Ptonomy. In this version, though, David mentions not liking dogs: the false memory of his beloved puppy has not yet been implanted.

The only thing comforting here is that the cool 1970s future aesthetic remains: can you imagine how depressing it would be if they all woke up in just a normal contemporary mental health facility?

There are bugs on Syd’s pie– the kind we’ve seen before on the astral plane. Lenny dances through David’s memories, seeming to create some and ruin others. This is one of the coolest things the show has done yet. I love how Legion manages to revel in stylistic excess in a way that works towards exposition as well. It’s also the kind of tone I like a lot in comic book and sci-fi stuff: telling a dark story that aims to ask above-101-level philosophical questions doesn’t stop it from having the bad guy be way flamboyant and over-the-top.

The Eye leers at Kerry. Cary dreams of Oliver’s scuba suit beckoning him. Syd and David can’t seem to remember who has what disorder. Syd sees a wall bleeding, and Lenny offers her some music therapy that I’m not at all suspicious of.

Cary goes into the astral plane(?) with the scuba suit and The Eye tries to get creepy with Kerry. Nurse Amy abuses David some more, which reminds me of another thing I wanted to talk about this week: in comic book canon, David is Professor X’s long-lost, illegitimate son. On the show so far, we don’t really know anything about the people who raised David and Amy in the previous-episodes reality. Were they normal and just had one lapse in storytime choice? How did they end up with him? Does it matter at this point?

The scuba suit shows Melanie the scene from last week where David was about to get merked, and then freakin’ eyes appear on the walls for some reason. Sometimes this feels less like recapping a show and more like recapping, like, an old Aztec bowl at the art museum: I’m just describing imagery and guessing at its purpose.

Lenny grills David and begins revealing her true self. She puts her foot on his groin and asks why humans care so much about happiness when what really matters is power. She says she knew his real father: “Talk about an asshole. Always acts so holy and then gives away his only son.”

Okay, class, if you could all settle in as quickly as possible, we have a lot of ground to cover today. Welcome to X-Men and Religious Symbolism. First of all, I’m sorry to say that my office hours are cancelled today because my asshole manager is making me cover Gene’s shift at the movie theater. Second, I’d like to say that Trevor brought up a unique point on the class online discussion board last night– we will not be talking about men’s rights in this class, but thank you for your, uh, inquisitiveness.

Now! Legion. What does the name “Legion” mean, or allude to? Morgan, I believe your hand was raised? Correct, Legion is the collective name of a group of demons that Christ casts out from a man in the Bible. However, when Lenny talks about Professor X giving away his only son despite being all holy, we can call that– what? No, we will not be talking about “cucking” today, Trevor, but thank you. We can call that Christ imagery, specifically connoting the passage in which Lucifer tries to tempt Christ in the desert. What’s important about that? Well, it makes David both the savior and one in need of a miracle in order to cast out his demons.

The episode ends with Cary in the scuba suit, gesturing to Syd to follow him. Why not Kerry? Are they reunited in the other realm? Is this just an effect of the music therapy, taking Syd further into unreality? Where’s Oliver? We’ll see I guess! Class dismissed, and if anyone’s interested, my ska band is playing in the commons Tuesday at three p.m. 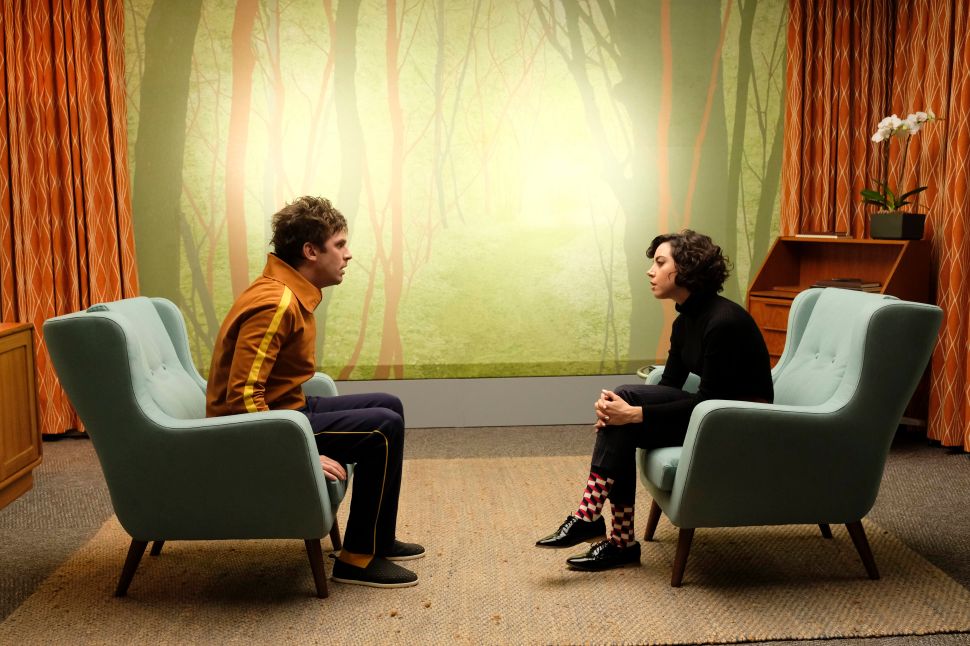