This episode begins with an introduction: Jemaine Clement (uncredited) is in some kind of hip ice cave, and he talks about the two kinds of stories we tell our kids– one is about a sympathetic fuzzy bunny who overcomes adversity, the other is a cautionary tale: if you get too close to the ocean, you’ll be swept out to sea. This episode, he explains, is about a fuzzy bunny who gets too close to the ocean.

This story, therefore, reminds us of our empathy while also frightening us about the world’s dreadful possibilities. More of such stories should exist, arguably, but the episode also reminds us why people don’t tend to put in the work to make them exist too often: it is a stone-cold bummer, and while it draws one deeper into empathy for the show’s various fuzzy bunnies– Kerry, Carey, Syd, Dr. Poole, Amy– it alienates one radically from the protagonist, who could be turning into a kind of version of the show’s other warped children’s narrative, The Angriest Boy in the World.

Ptonomy and Syd discover that David broke Dr. Poole’s skull when he was breaking into his office. Syd reasons that perhaps he was not stealing stuff for drug money, but trying to destroy evidence after having let something slip on tape. Maybe David is creating fake memories to hide the real ones, but either way– if he would destroy evidence on tape, why would he let people walk around inside his mind unless he had just willfully forgotten his real memories that fully? The show seems to be hinting that the Devil with Yellow Eyes and the Angriest Boy are guarding the evil behind the fake memories, which David is too far gone to even be aware of. I’m having trouble buying that, maybe because we just went through too much trouble as viewers for David’s naivete to not be part of some larger plan.

Meanwhile, Amy is still imprisoned, and Dr. Kissinger is in the cell next to her. Amy reveals another layer of David’s apparent confusion or deception: they never had a dog, and therefore David wasn’t chasing their dog on Halloween when he encountered the Angriest Boy. If this is something David has just convinced himself of, you would think it would have come up with Amy before.

Summerland’s female assassin, Kerry Loudermilk, explains the story behind her relationship to the scientist, Cary Loudermilk: they share a body. “He does all the boring stuff,” she explains. It also turns out she only ages when she’s away from him. David finds himself on the astral plane with Melanie’s husband Oliver (Clement), whose corporeal form is frozen in a room at Summerland. Oliver is a hilarious character who makes David listen to jazz and wants to know what the situation in the present day is regarding free love and bralessness.

Kerry, Ptonomy, and Syd go to Calvino Realty (nice) to talk to Philly. Philly wants to send David the message that “they’re watching,” and drops another bombshell: in the drug memories, Lenny wasn’t really there, a big guy named Benny was.

The three of them go to talk to Dr. Poole, who appeals to their sympathy regarding the incident in which David smashed him over the head, then reveals himself to be The Eye. Kerry finally gets to beat up some dudes, but ultimately the goons capture her. The Eye tries to grab Syd but in doing so, gets Freaky Friday’d. David confronts Lenny about whether she’s real or not, and she gets him in touch with his inner rage, enough to focus on transporting in front of the truck containing The Eye, Syd, and Kerry. David accidentally liberates The Eye in Syd form and restrains Syd in The Eye form, for just long enough to realize his mistake as The Eye shoots Kerry. Cary feels her pain, and Lenny appears behind David, looking sinister. Just what kind of malevolent force is Lenny? And is it cool that she’s that? Or just kind of annoying?

Kerry gets a backstory in this episode, and a sort of life partner who can’t exist without her, and all of this effort pretty transparently fulfills the purpose of making us care about her before she gets shot. The show’s habit of constantly revealing aspects of its own reality to be false is less interesting and more exasperating than it thinks, but I am invested in the idea of taking a character seemingly worth rooting for and showing that his lack of control is victimizing his equally interesting friends. 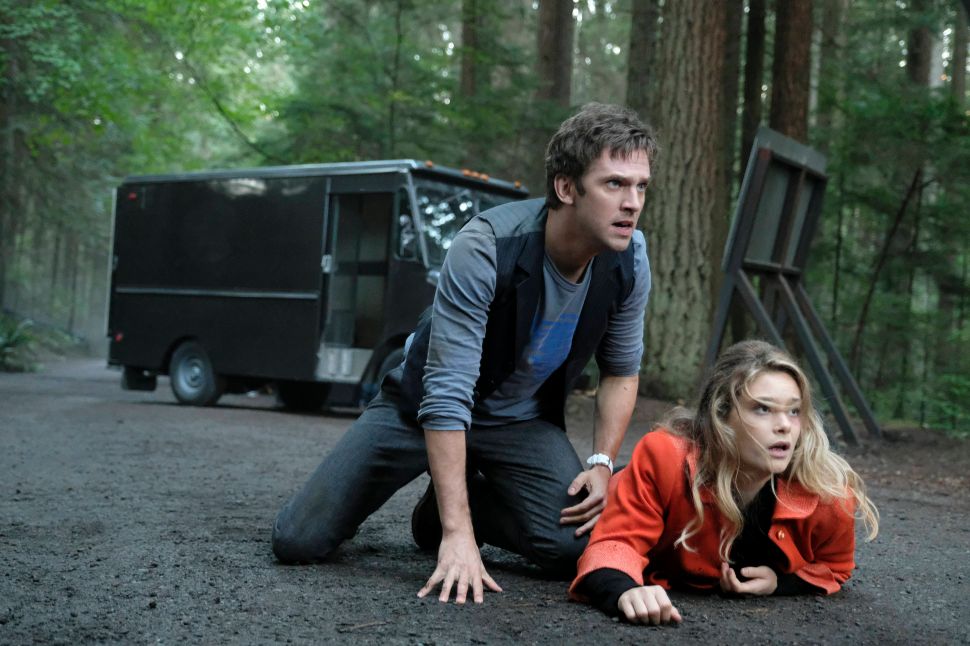