This show, like its protagonist, can at times seem unknowable. The pilot appeared to be for a show about a young mutant with mental health problems named David and his recently-deceased friend Lenny. Over the course of only a few episodes, the show brought surprise after surprise regarding who David was, whether he was actually a mutant, whether he actually had mental health problems, who Lenny really was, whether anything any character was experiencing was real or not. The show deconstructed itself so much that the deconstruction was the show, which is fascinating but makes it hard to root for anyone, to feel emotionally attached. What this finale accomplishes is a decision as to what the show is– what it’s about, who its characters are, what things mean to them and what they have to do. And it starts off doing that by inverting things again.

The first thing we see in this episode is Clark, the smug asshole interrogator who gets blown up, to the audience’s delight, in the pilot. Only now we see him as a loving husband and father who suffered a tragic accident that shook his family and made him hell-bent on revenge. Has a TV villain ever been given such loving treatment? Maybe Battlestar Galactica’s Gaius Baltar? At the risk of sounding heartless, I submit that the whole loving family thing shouldn’t matter that much to you. This man is a torturer obsessed with destroying people who are too different.

After giving a triumphant monologue, he puts on a cool maroon suit. Despite that Legion contains only subtle references to the main X-Men narrative, it consistently looks more classically X-Men than many other related properties.

Unsurprisingly, David uses his powers to stop the troops from killing his friends. Unfortunately, this moment gives him another chance to ham it up and act like how every overly self-confident dork imagines himself. He carries himself like the mean band nerds in high school that would bully the other band nerds. At one point in this episode, he says, “War is over… if you want it,” like the worst person you ever met in college.

Melanie asks Oliver out, hoping they don’t get obliterated before then. Kerry is still mad at Cary for abandoning her. The characters keep Clark locked up while he transmits what he’s seeing to the agency from his eye, both organizations observing each other. Much of the first half of this episode is about characters circling each other before one of them can go in for the kill– Syd encounters Amahl Farouk in his increasingly decaying Lenny guise, and the parasite tells Syd she’s going to help get him out of David’s head.

The Summerland folks have David in a sort of demon chemotherapy to cast out the parasite for good. David watches as all the Farouk pops out of his memories. Interesting fact: did you know that if you play “Breathe” by Pink Floyd, from “Dark Side of the Moon,” exactly 28 minutes into this episode, it syncs up perfectly?

Syd realizes the treatment is not working and goes over to give David her trademark Freaky Friday kiss, thus allowing Farouk to inhabit her. Then she goes over and touches Kerry– I guess we can assume that’s not really Syd being that callous but Farouk. Parasite-infested Kerry starts beating the shit out of Cary, and Ptonomy tries to shoot her. She knocks the gun away and the resulting stray bullets pretty much destroy the lab.

David and Farouk / Kerry face off against each other. David gives his trademark awful smirk and runs towards her in a way that looks like he’s never seen running before but only had it described to him. Oliver opens the door in time for the evil Farouk energy to knock him back into the room he was trying to come out of. He exits the room again, this time singing calmly to himself.

All of the other Summerland residents– including Clark, who realizes they must work together now– get up off the floor. Cary and Kerry settle their beef, too. They wonder where Oliver and the parasite are as Oliver drives, blasting T. Rex, Lenny by his side.

A pilot is usually a show’s mission statement, but Legion needed to keep digging deeper and deeper from there until it found its true self in the season finale. The bad news is that this true self does feature a great deal of mugging from David, who sucks. The good news is everything else. The show handles wild sci-fi concepts in a humanistic way, it’s darkly funny and wry, everything looks cool, Aubrey Plaza is terrifying, it’s trippy, and it’s about youth culture and counterculture fighting The Man, like all good X-Men stuff. See you next season! 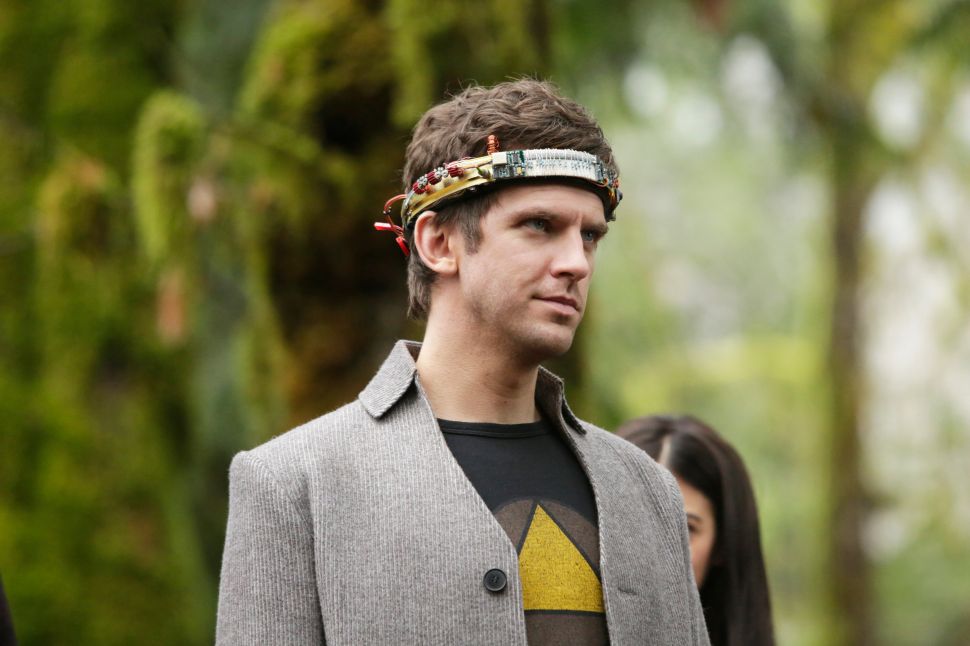