Is CNN intimidated by the vicious attacks against its integrity from amateur President Donald Trump?

Or did CNN simply get caught flat-footed and short of personnel when a major political story broke in the usually sleepy news cycle of late Sunday afternoon?

The problem was obvious at 6:09 p.m. when reporter Josh Rogin—part of a four-box conversation with anchor Pamela Brown—spoke from outside the White House.

“There’s also reporting by some outlets that FBI Director Comey is asking the Justice Department to publicly state that none of what Trump is claiming is true,” Rogin told Brown.

She put her hand up the way a traffic cop does for “Stop.”

“Right,” Brown said, “and we’re, we’re trying to get that, you know, we’re—we’re, we don’t have that reporting confirmed here on CNN yet.”

Brown then changed the subject.

This was curious in that The New York Times had posted the story at 4:27 p.m. and CNN’s competitors—MSNBC and Fox, at the top of the same hour—were talking at length about it. Later in the hour, it would lead the news on major networks.

But CNN didn’t catch up to the scoop until 6:45 p.m. with the ”Breaking News” label and sound effects and a banner headline that said “FBI asks DOJ to refute Trump’s wiretapping claim.”

On camera came Shimon Prokupecz, a crime and justice producer, who called it “Quite a stunning sort of development here.”

He quoted “two senior officials” confirming the story. On Fox, they returned to the story later in the hour without too much analysis. But MSNBC jumped into it joyfully, with David Corn of Mother Jones discussing Trump’s psychological state.

“At what point do we start using the word ‘deranged?’” Corn asked of Trump. “He’s making it up.”

Howard Dean, the former Democratic governor of Vermont, said “Trump has no idea of the Constitution. Eventually, the public’s going to get sick of this . . . I don’t believe he’s doing this on purpose. I think he doesn’t know what he’s doing and he’s emotionally very unstable.”

Even before his Jan. 20 inauguration, Trump singled out CNN for ridicule as the “Clinton News Network” and, later, a broadcaster of “very fake news.” Trump’s White House has made it difficult for CNN to book spokespersons for the administration. CNN, the Times and a few other media outlets were banned recently from a White House press briefing.

Until the Comey matter broke, the big story of the day was Chuck Todd’s interview with James Clapper, the former director of national intelligence, who told the NBC host that Trump’s accusations against Obama had no merit.

Clapper’s words were important enough that most of Todd’s competitors citied them. Clapper denied that Trump’s headquarters at Trump Tower was bugged last October in a search for connections between his staff and Russian operatives.

“There was no such wiretap activity mounted against the President—the President-elect at the time—or as a candidate or against his campaign,” Clapper said. “I would know that. I can deny it.”

Clapper also said he expected to be called to testify. The intelligence committees of both the Senate and the House of Representatives are investigating Russian hacking of the American election and a propaganda campaign favoring Trump over Clinton.

On Saturday morning, Trump claimed in a Twitter tantrum that Obama had Trump’s “wires tapped.” He called it “McCarthyism,” said it a “NEW LOW” and added “This is Nixon/Watergate. Bad (or sick) guy!”

On Todd’s pundit panel, Thomas Friedman of The New York Times expressed his disapproval of Trump.

“That is not adult behavior,” Friedman said. “That is juvenile behavior. And the fact that we have a president who engages in that is deeply, to me, disturbing . . . Every day you see him eroding his moral authority.”

Of Russia, Friedman said “Right now in Moscow, they must be clicking vodka glasses.” He predicted that a few more mornings filled with such tweets will change the conversation regarding Trump.

In the opening to Todd’s show, the screen showed former national security advisor Mike Flynn walking out of a building. He resigned after lying about discussing sanctions with the Russian ambassador. When Todd said the words “Flynn reversed himself,” producers rolled the video backward to make it look as if Flynn were walking backward.

Mike Rogers, a former chairman of the House Intelligence Committee, is one of those Republicans expressing increasing doubt about Trump. He told host Jake Tapper that Trump “just put another quarter in the conspiracy parking meter” and that “it makes no sense to me” to feud this way.

“Making this a big public fight like this, I just think is wrong,” Rogers said. “Matter of fact, the only winner in this whole thing has been Vladimir Putin.”

Another Michigander, former Democratic Governor Jennifer Granholm, said of Trump “He wants to assert his power over the truth, which is why he lies so much.”

She spoke of Senator Ben Sasse, Republican of Nebraska, who warned of a “civilization-warping crisis of public trust” in the current political climate.

Whatever happened to White House mouthpieces who used to show up regularly on these shows?

Remember Reince Priebus, Kellyanne Conway, Sean Spicer and—for one harrowing week—Stephen Miller? None of them could be found on the Sunday morning shows. The only one was Sarah Huckabee Sanders, a deputy press secretary who got into an entertaining exchange with ABC anchor Martha Raddatz.

They spoke of Trump’s wiretap charges.

RADDATZ: “Why is the president saying it did happen?”

SANDERS: “The American people have a right to know if this took place . . . If it did, again, this is the largest abuse of power I think we’ve ever seen.”

RADDATZ: “You just keep saying ‘If, if, if!’ The President of the United States”—(a chuckle of astonishment)—“said it as a fact.”

SANDERS: “We need to put out hard facts that show that this happened.”

Later, on the pundit panel, Matthew Dowd wondered if Trump is becoming either “Captain Queeg” or “Captain Bligh.”

Another Republican offering restrained criticism of Trump was Senator Susan Collins of Maine who told host John Dickerson that it would be helpful if Trump would turn over any evidence about his alleged bugging to the intelligence committee.

A fellow member of the intelligence committee, Senator Mark Warner, a Democrat of Virginia, suggested a witness to testify. “I want to hear from General Flynn,” he said.

“There’s something wrong in terms of the discipline within the White House and how you operate,” Panetta said. “You cannot have this kind of situation.”

Panetta said the current investigations are “sending a terrible message . . . It makes us vulnerable to our enemies.”

“This issue is not going away,” he said. “There’s too much here.”

Cotton talked around it and said Trump foes have not yet “come to grips” with the fact the Trump won the election.

So Wallace moved on to Sen. Chris Coons, Democrat of Delaware, and speculated about Trump’s accusations.

“Well, there is another possibility, too,” Wallace said, “which is that it’s just not true, isn’t there?”

“That’s right,” Coons said. “Of course. It’s quite possible it’s just not true and the President offered no evidence or backing for his outlandish claim.”

Peter Baker of The New York Times spoke of friction in the Trump camp, some of it caught last week by a camera outside a window of the Oval Office. It showed Steve Bannon waving his arm while speaking.

“They’re having these fights in a public way,” Baker said. “There’s a free-for-all.”

On Brian Stelter’s CNN panel, Mollie Hemingway of The Federalist used words like “hysterical” to describe the media covering Trump.

This bothered Charles Blow of The New York Times, one of Trump’s most vehement critics.

“The president is actually lying and that’s an assault on the truth itself,” Blow said. “Provable, demonstrable lies . . . Our business is truth. We must defend the truth.”

On Fox, one guest of host Howard Kurtz was Michael Tomasky of the Daily Beast, who said this weekend’s Trump accusations raise a question “about Trump and his mental processes.”

Regarding Trump’s speech to Congress on Tuesday, Tomasky said “He looked like a president for an hour.” 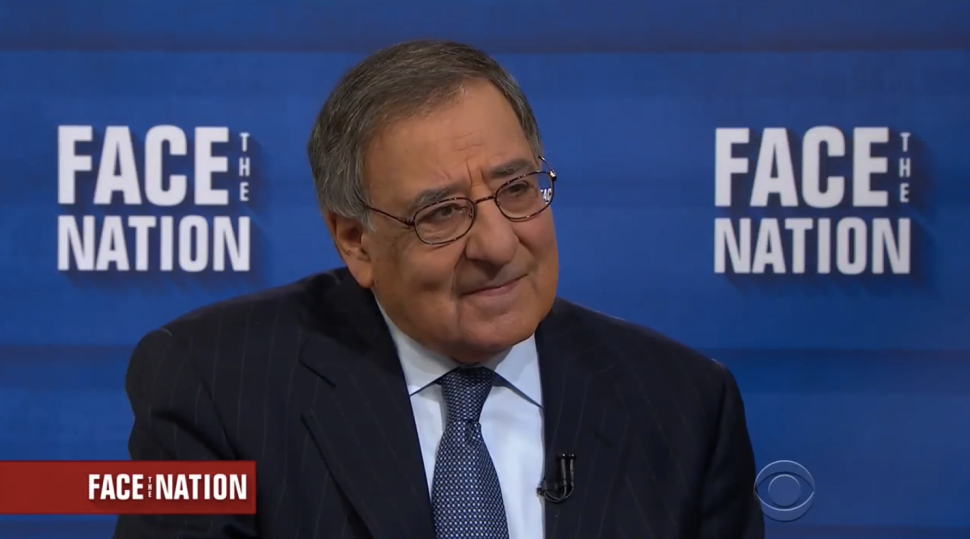