It may seem like a prim and proper time, but in the 18th century, the sex trade was alive, well, and actually thriving. In fact, at the time, nearly 20 percent of the female population was making their living as prostitutes.

The new drama Harlots features an unflinching look at the oldest profession via two warring brothels and the women who populate them.

As Margaret Wells is struggling to reconcile her roles as a brothel owner and mother to daughters Charlotte and Lucy, her business comes under attack from Lydia Quigley, a rival madam with a ruthless streak. It’s Wells’ scrappy brothel vs. Quigley’s ‘House of Delights,’ as the cultured Madam has dubbed her place.

Lydia Quigley, described as the Lady Macbeth of brothel owners, is portrayed by Lesley Manville, a prolific and well-respected British actress who usually plays much more lovable characters.

“This is a perfect role for me,” says Manville. “In several other projects, I’ve played some very genteel characters who are loving, non-judgmental and understanding. So, to come in and play this extremely callous and calculating woman was very exciting to me. I mean what’ s not to like about challenging yourself? The truth is actresses like playing the bad seed every once in a while because it’ s rather fun.”

Describing what drew her to the project, Manville explained, “The characters as so witty, and truthfully, I didn’t think a series could be done like this. All of these women are in the forefront, they’re not subtext. They’re not prostitutes bitching about the men, they have power and are in control. You really get to see what it was like to be a prostitute in 1760.”

The high number of women working in the industry at that time was shocking to Manville. “I learned that it wasn’t just this one segment of the population,” she explains. “It was happening everywhere; happening in every level of society — in back alleys, within the aristocracy class, with royalty and in the government as well. We don’t steer away from showing the very broad social spectrum of people who were involved in it.”

Further fleshing out what viewers will see, Manville says, “This is really about female empowerment and while there’s male-female drama, it’s really about mothers and daughters and sisterhood and supporting your fellow workers.

It has strands of these social issues that we deal with today; 18th century London is just the backdrop for it.”

Manville says that she’s aware that there will be a portion of the population that will turn away from the show given the subject matter. To this idea she responds rather curtly, “Don’t watch if you don’t want to. But, I think this a take on this professional that we haven’t seen before.”

She goes on to say, “Remember, that although the foundation of this is based in actual fact, we’re not making a documentary. We’re making a scripted drama.

So, on top of this truthful picture of that specific time period in London, we got to impose our take on this story in a very stylish manner.”

There are a lot of varying points of view presented and all with good reason, says

Manville. “This is very real in that no one here is perfect. Everyone has their own motivation and it’s curious to watch what these women will do to get what they want.” She laughs a little as she adds, “That’s something that’s never changed no matter what the time period – women know what they want and, even often facing outrageous odds, go out and work to get it. If you want to see a show about that, this is it. Tune in and get empowered, it’s as simple as that.”

All episodes of ‘Harlots’ are available on Hulu. 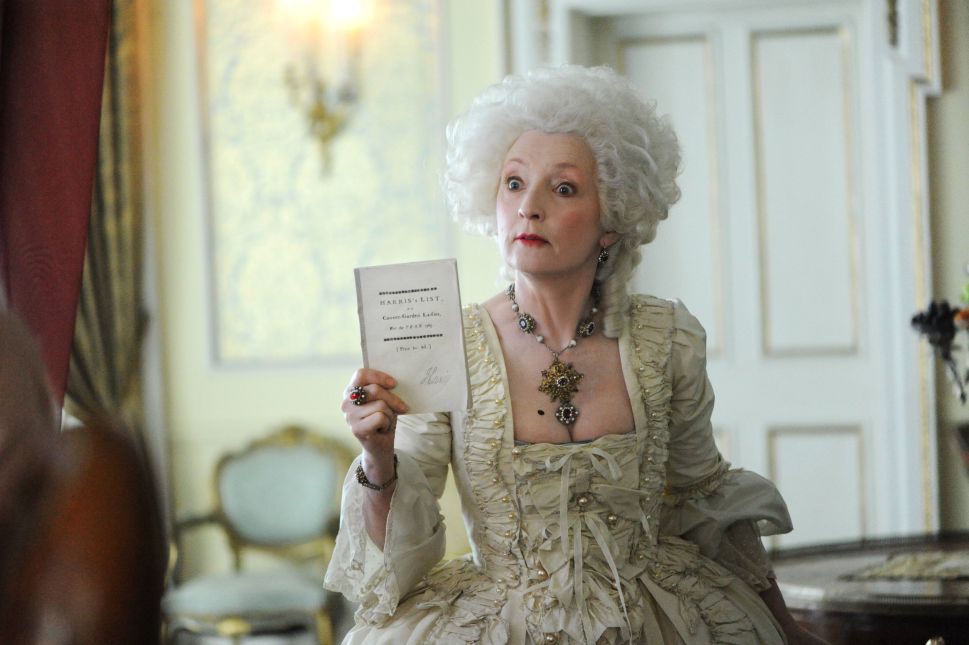