There is a peculiar type of American darkness, and it is one suffused with light. Bright sunshine masks a whited-out evil, smiling faces conceal the weight of sadness. It is different from the darkness, the Gothicism of Europe. Mediterranean darkness is Caravaggesque, dim dungeons and hot blood and skyward-glancing martyrs: The Romantic Gothicism of Matthew Lewis’ The Monk and Ann Radcliffe’s The Italian. British darkness is linked with the smog of industrialized cities, Conan Doyle and Jack the Ripper. Scandinavian darkness is likewise more literal, not hidden away from sunlight by ruined castles and monastic enclosures, but due to the absence of sufficient sun, days drained pale, cotton sky, months without brightness. But American Gothicism is darkness despite the sun. And the brighter it is, the more disconcerting.

As an undergraduate student at Colby College, I vividly recall a literature course I took with Professor Cedric Bryant, called “American Gothic.” The focus was on the phenomenon most often associated with fiction, particularly “Southern Gothic” fiction. The star of the genre is Flannery O’Connor, whose iconic story, A Good Man Is Hard to Find, is the poster work for the style, but it is admirably represented by the likes of Joyce Carol Oates (Where Are You Going, Where Have You Been) William Faulkner and Daniel Woodward. The themes are grotesque, the characters too, inside and often out, delusional, ignorant, self-righteous, evangelical, broken. And part of what breaks them, part of what makes America one of the scariest places in the world, is an explosive cocktail of a rage born of promises unfulfilled, a sense of entitlement denied, and the search for some Other to blame.

But this is not restricted to the American south, nor to literature: In television, True Detective is an example of Southern Gothic, and Breaking Bad of what we might call Southwestern Gothic. New England had its own branch of the genre, set primarily in Providence, Rhode Island and rural Massachusetts. The wildness of America, the mysterious rituals of its indigenous people, the puritanical mania of its early settlers, the witch trials, all fed the stories of Edgar Allan Poe and H. P. Lovecraft, recently manifest in Robert Eggers’ film, The Witch. But the phenomenon of American Gothicism is likewise present in fine art. Particularly, in the paintings of Grant Wood and Edward Hopper.

The most obvious first stop is Grant Wood’s most famous picture, among the most recognizable in the world: American Gothic. It is on display now in a show at the Royal Academy in London, after a brief appearance in Paris. The 1930 painting had never left America before. Its current show is called “America After the Fall: Paintings in the 1930s.” Depending on your political stance, the title could be considered portentous to the current state of affairs, but in fact it refers to the “fall” of the stock market in 1929, and the Great Depression. This is where the sunlight of hope and optimism and infinite possibility of the American Dream, the so-called Progressive Era, met harsh reality.

After the thundering, runaway brilliance of the nineteen-noughts, the complete expansion to far-off California, the actualization of the “Go West, Young Man” approach, the financial windfall of industry and oil and railroad, all seemed lost. This is where the seed was planted, and then ripped from the soil. This is where Americans “learned” that they could do anything, be anyone they wanted to be, that a poor man could grow up to be president, that through hard work and smarts you could pull yourself up by your bootstraps and make something of your life, that even you could achieve fame and fortune. To have that sense of righteousness, that to be born American meant that you were one of the blessed chosen, and then to have it all suddenly torn away summoned up a shadowland.

The darkness never left, is still with us today. In the Land of the Free and the happy, there is a sense that Americans are either on top of the world and beaming, or buried beneath it and fuming. Not everyone recalled that they had to be smart and work hard, in order to make it. Some felt that things should be handed to them. Others felt they were being smart, and were working hard, but there were forces working against them. Dreams that are implicitly promised and denied make for angry people. But the culture of America is one of an enforced clean, shiny, upright façade. What goes on beneath the façade, if the bright, white smile masks rotten teeth, is another question. Thus an American, to quote Hamlet, may “Smile and smile and be a villain.”

Wood’s American Gothic, normally in the Art Institute of Chicago, is a skillfully-executed realist portrait of a married couple, farmers from Iowa. They are not real farmers—the models were Wood’s sister and his dentist. They are dressed in 19th century costume. The building behind them is meant to be their farmhouse, but looks like a prairie church of the sort that featured in another great example of Iowa farming American Gothicism, Stephen King’s absolutely terrifying short story, Children of the Corn.

The structure is built in what was called the Carpenter Gothic style. The term Gothic was first coined as a derogatory description of medieval European church architecture, which featured elongated, slender columns and walls, full of stained glass, and soaring up into the sky to meet vaulted ceilings that recall taught tendons, a package designed to awe penitents into feeling humble in the house of God. Elements of this architecture were picked up in other movements, like Victorian or Carpenter Gothic—details in particular, like pointed arches and windows, tracery, stained glass, and a general sense of stretching, elongation, distortion that appears elegant in the hands of a good architect, but can be awkward or even grotesque in the hands of a mediocre one.

Reading the expressions on the faces of the couple, there is a sense of intellectual vacancy, insistence on tradition, a superficial propriety, and the capability of violence—all very American elements. It is also a sort of glorification of the hard-working, blue-collar American, while shining a light on his flaws. The painting was entered into a competition at the Art Institute of Chicago and won a $300 prize, despite the judges calling it a “comic valentine,” which does injustice to the greatness and depth of the work.

While I admire American Gothic hugely, I do not consider Wood to be a great artist—none of his other works affect me so. If there is an artist whose complete oeuvre best exemplifies American darkness, it is in the light-soaked paintings of Edward Hopper. There is a reason his paintings have inspired Alfred Hitchcock (the Bates Motel from Psycho is based on Hopper’s The House by the Railroad) and David Lynch (who is the master of Californian darkness in film). Perhaps no painting is more heart-breaking than The Automat. It is deceptive. A young woman sits at a table, late at night, nursing a coffee.

But just about anyone who views this simple-looking painting reads the same story within it. She has come to California full of hope at a new life, perhaps a runaway, perhaps an optimistic girl from the Styx. She has one good set of clothes, and what little money she brought with her is running out—hence her repast at an automat, the cheapest form of eatery, and also the loneliest, with nary a waiter or cashier for company. Her attempts at finding work and companionship, at achieving her dreams, have not yet panned out, and she is deep in thought, wondering what else she can do. She is very much alone, late at night, preferring this empty eatery to whatever waits at “home,” and the black night outside the window behind her mirrors her thoughts, though her body is harshly illuminated by artificial lights above. This is the American Dream minutes before it shatters.

Hopper is a master at threading bright light with invisible darkness. There are many works to choose from, but consider Seven A.M. It looks so innocuous: a storefront which, on closer inspection, we see is abandoned, long closed, but with a few items remaining on view—a clock, a cash register, some bottles in the window. The forlorn shop tells its own tale: Of optimism at a business venture that failed. Just beyond the corner store, dark torqued trees lead into a thick forest, wild like the Romanticism of Caspar David Friedrich, the sublimity of knowing a single human’s relative insignificance and fragility, when compared to nature and time and the whims of fortune.

But American wilderness has a particular untamed wildness to it, or at least it did before the information age stamped wildness out. One almost feels that the forest has swallowed up whoever owned the store, encroaching upon it until the humans fled. That American brightness is the scariest of all, because who knows what Americans will do, will damage, to push through their self-righteous dreams? All while maintaining a white smile and the façade of friendship, which may conceal a sharper set of teeth beneath.

This is the latest in Observer Arts’ series Secrets and Symbols, by author and art historian Noah Charney. 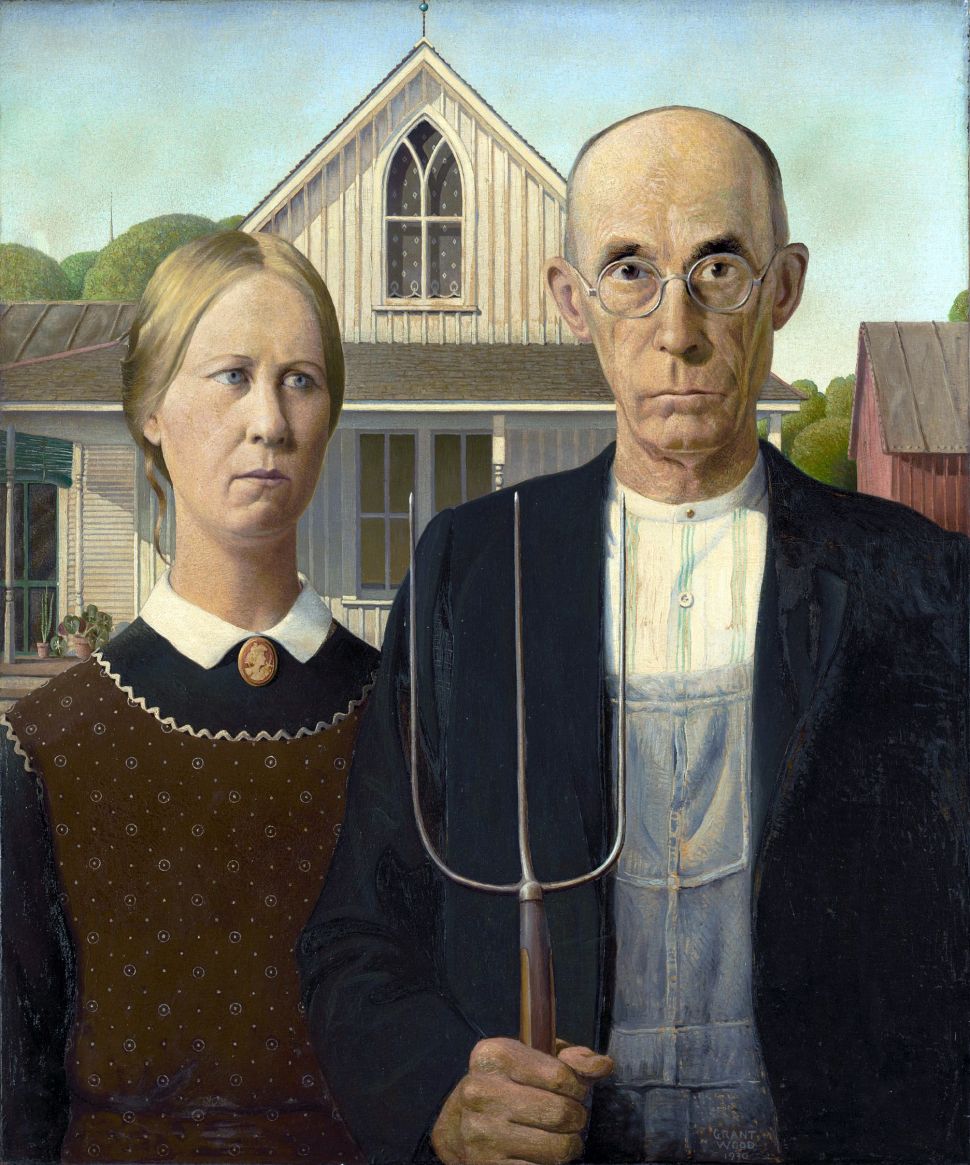