James Mangold’s Logan is the most human movie ever made about characters who are more than human. It is the first comic book movie since 2008’s The Dark Knight–and in this respect, it surpasses Christopher Nolan’s Bat-sterpiece–that has both a heart and a soul. The string of films churned out in the interim by Marvel Studios have an abundance of the former, but none of the latter. It’s hard to inject a soul, much less a unique personality, into what amounts to billion-dollar Paint-By-Numbers exercises in familiar beats and rhythms. As Mangold himself told Vulture: “[You] can’t have interesting movies if you tell a filmmaker, ‘Get in this bed and dream, but don’t touch the pillows or move the blankets.'”

On the other side is Warner Brothers’ grand DC Comics experiment–most notably the joyless Batman v. Superman and the patchwork Suicide Squad–which clearly possesses neither. DC movies are the zombies of the comic book film world; they shuffle along without thought or emotion, stopping only for the latest bout of blood-splatter.

But Logan, from X-Men standby 20th Century Fox, aches, breathes and bleeds in a way that feels equally as human as it does “mutant” (which, after all, has been the entire point since the X-Men first appeared in 1963). Set in 2029, it follows an aged and ragged Logan “Wolverine” Howlett (Hugh Jackman), yearning for the end his regenerative powers won’t grant him, tasked with ferrying the dementia-addled psychic Charles Xavier (Patrick Stewart) and mute pre-teen killing machine daughter Laura (Dafne Keen) across miles-and-miles of desolate, danger-filled road. But, man, it’s also about so much more than that. It’s for more than that. Logan is about growing old in a body you could swear was young yesterday. Logan is about being young but already terrified of the adult you’ll become. It’s about wanting to die even while your loved ones keep you tethered to life, about wanting so badly to live even though death is an inevitability.

Logan, maybe more than anything, is a singularly unique study in the ways art–especially comics books–can capture life. And in doing so, it also must capture death.

*Logan spoilers, and I mean lots of ’em, to follow*

By the time Johnny Cash’s “The Man Comes Around” plays over Logan‘s closing credits, both Charles Xavier and Logan are dead, both at the adamantium-clawed hands of Wolverine clone X-24. The gorgeous final shot is of Logan’s grave, fitted with a cross turned on its side to resemble an X, as Laura and a group of new (New?) mutants head off into an uncertain future. It’s an ending that is also a beginning, the classic comic-book page turn, the caption in the corner promising “More to Come!” even as you process the image right in front of you. It’s also one of the most realistic portrayals of dealing with death that I’ve ever seen.

Charles Xavier, probably the most famous X-Men next to Wolverine himself, portrayed since 2000 by the beloved Patrick Stewart, meets his end in bed, old, frail and grieving over a memory his brain can hardly grasp. “This was, without a doubt, the most perfect night I’ve had in a long time,” Xavier says, and Stewart fills the next line with tear-worthy emotion. “And I don’t deserve it, do I?”

He’s referring to an “incident” that Mangold and his fellow writers Scott Frank and Michael Green only allude to, but never quite explain, a catastrophic event in Westchester that resulted in the death of “seven mutants.” What we can assume–by the fact that Xavier’s School for Gifted Youngsters is located in Westchester, by the fact that the memory alone devastates Xavier–is that Professor X’s inhumanly strong but deteriorating mind led to the end of his, and Logan’s de facto family, The X-Men. “We just kept running away from it,” he says to Logan, a realization, accusation and confession all at once.

The twist here is that Xavier was never talking to Logan at all; the man in the room is X-24, also played by Hugh Jackman plus a bottle of black hair dye, who kills Charles Xavier with a swift, brutal claw to the heart. Compare this to Superman’s death in Dawn of Justice, all sparks, explosions, swelling orchestrations, funerals and cannon fire. Compare this to Marvel Studios, who seem either incapable or unwilling to kill any major character, period, even when they fall from the sky. Charles Xavier, leader of the X-Men, is murdered alone, in bed, and–in his mind, at least– at the hands of his closest friend.

A lot of critics mention which beats of Logan made them cry or, at the very least, hit them the hardest. They often cite either hero’s death, or the final eulogy for Logan delivered by Laura or, occasionally, just throughout the whole damn thing. For me, it is the moment Laura turns to see Xavier’s blood-covered body in the back of the car. Dafne Keen, just 12-years-old, is incredible throughout, but her response here is equal parts animalistic–she is Wolverine’s offspring, after all–and achingly familiar to anyone who has lost a loved one, who has picked up the phone already knowing the news on the other end. It is the immediate, wordless anger that comes with loss because death renders even the strongest people helpless.

And then Logan and Laurel bury Xavier by the side of the road, with the chirping of birds and babbling of nearby crook as their only fanfare. It’s imperfect, sloppy and quiet. The best that can be done. But done it had to be, because these things are cyclical. Xavier and Logan forced themselves to move forward after the death of The X-Men. Logan and Laura move on after the death of Charles Xavier. That’s why that final shot, of Laura and her friends departing from Logan’s final resting place scarred but alive, is so perfect. Because it isn’t final. In stories, in movies, in comic books, in life, nothing ever is, really. We don’t leave the ghosts of the people we love behind; they beat the blacktop right behind us but the point of Logan is the road is long, so there’s nothing to do but keep going.

Which sounds depressing–and Logan, despite genuine moments of humor, despite thrilling action, is largely depressing–but you leave the theater oddly reassured. Logan is a successful comic book movie because it understands what most ties comic books to real life. It’s never about the endings themselves. It’s about what comes next, just as much as it’s about these stories inked into paneled page forever.

For example: Logan, dying impaled to a tree stump, grasps his daughter’s hand and whispers, “So this is what it feels like.” It’s up in in the air, at least to me, whether he is referring to the cold reality of death, or the warm reassurance that comes with caring for someone and having them care for you in return. I think, in the end, the larger point is that Logan couldn’t understand one, without experiencing the other. 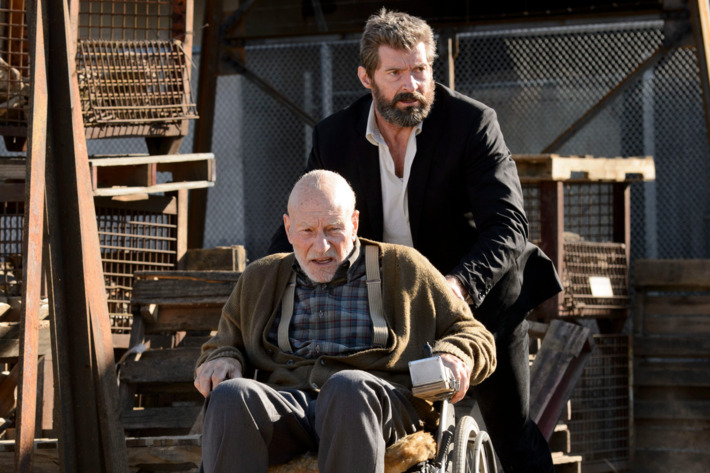