Designer Jean Rudoff, by fashion’s definition, is a true disruptor. For example at his Lumiér Garson show at Mercedes-Benz Fashion Week Russia this Wednesday, he decided to bring his backstage onto the runway. He arranged racks of clothing and two folding tables, loaded with laptops, boxes of pizza, tape and scissors; a crew of cool Russian kids slouched by the clothing, sometimes handing a masked model a piece to wear, or unzipping the back of a trench coat before it was walked down the runway. This slow moving show, which lasted almost 20 minutes, was set to an eery soundtrack, composed of errant beeps and static noise.

Models donned easy pink silk skirts with an asymmetrically lace-trimmed hem, sweatpants with endless rows of utilitarian buckles, and black cargo jackets heavy with zippers and D-rings. Most of their faces were shrouded by patent leather and velvet face masks, some of which looked to be a riff on a niqab, the hijab worn by Muslim women which only allows the eyes to be seen.

A stunt like this wouldn’t be uncommon at the shows in New York or London, but it is rare for Moscow, where the design as a whole scene seem to be struggling to find a solid identity. That’s not the case for Rudoff, whose brand first debuted at fashion week in March 2015, the year it was founded. He abandoned his law studies to branch out into fashion. As a result, his collections tend to be a careful analysis of culture, rather than just clothing.

“The main idea of Lumier Garson by Jean Rudoff is to show some cruel and adverse aspects of modern reality. The collections reflect what is currently happening in the world, revealing what is underneath the top layer rarely pierced through by the ordinary man,” is how Then and Now, an e-commerce shop, described the brand. They are the only international stockist for this young Russian designer.

“This collection is about nothing,” Rudoff told to the Observer before his show, through a translator. “It hasn’t got any message, any idea and it’s also called ‘No Name.'” Despite the lack of a formal description, there was a sense of aggression through the range. An olive green bomber jacket had patches that were haphazardly painted over in black; a trench coat with buttons that ran from collar to hemline was similarly splashed with dark paint.

Backstage, Rudoff was hanging out with a few of his young friends, who were listening to techno music and snacking on McDonald’s. He was dressed like the others, in cool sweatpants and a black embroidered baseball cap. However, his shirt stood out. It read: “Idea stolen from Martin Margiela. Pattern stolen from Helmut Lang. Color stolen from Issey Miyake. Print stolen from Raf Simons.”

Last season, plenty of journalists pointed out that his collection was heavily inspired by each of those design icons, even saying that Rudoff ripped off the font that Simons has adopted as his signature.

“Now I just laugh about it,” he said. “But this is a message for people that you shouldn’t say words that are not true and are not a real situation.” Earlier in the interview, he mentioned being wary of journalists, expressing disdain that they use their own terminology to describe a situation and often move around words, to make the quotes as they want.

“It’s not the same thing as the designer said,” he pointed out. Nevertheless, he agreed to an interview with the Observer. He even offered us to hang out backstage with his crew and enjoy a bite of McDonald’s grub.

One would assume that the Lumiére Garson customer is similar to Ruduff, who surrounds himself with cool young creatives and has a penchant for street wear. But that is not necessarily the case. “I prefer when my pieces are worn by everyone,” he said. “I like when a lawyer can wear these pieces, art student or anybody who likes it. My clothes have no name, gender, age or nationality; it’s for everyone.” He made a good point, as the ruffled pink silk dresses could be worn to a cocktail party, the trench coat skirt is appropriate for any buttoned up office setting, while skate kids will fawn over the heavily toggled sweatshirts and cool sweatpants.

It’s a good thing that Lumiér Garson will be launching an e-commerce site of their own in the near future. Rudoff assured us that his whole collections will be available there, so anyone, and everyone, can score a piece from this up-and-coming talent. 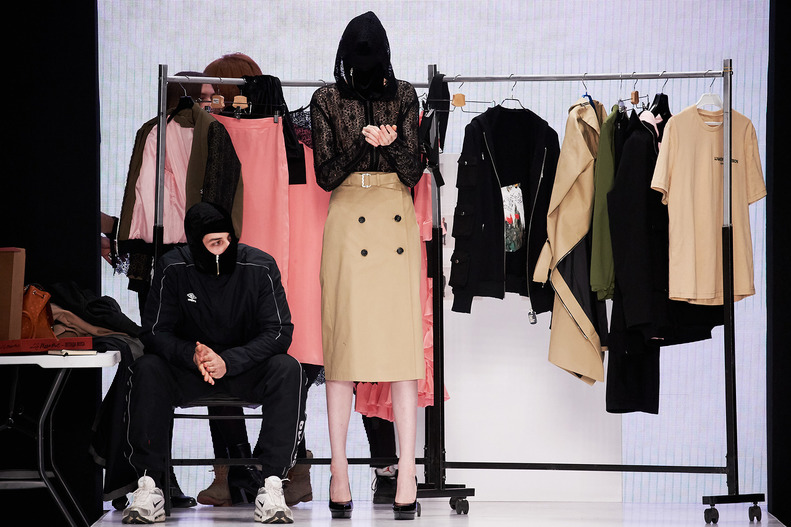