Individualized fashion is at the heart of the 1970s hippie movement. Makers used embroidery, crocheting, patchworking, quilting, and tie-dyeing to create freedom-inspired looks, enabling them to wear their ideology on their sleeve. “Counter Couture: Handmade Fashion In An American Counterculture,” is now on view at the Museum of Arts and Design, is the first in a series of exhibitions by the MAD called “The Art and Craft of Getting Dressed,” which will explore fashion as it relates to studio processes in craft.

For guest curator Michael Cepress, this exhibition is a reflection of his lifelong obsession with 1970s counterculture fashion. Originally exhibited by the Bellevue Arts Museum in Bellevue, Washington, Counter Couture “brings together over two dozen artists working in the ’60s and ’70s who fought for change by sewing, embroidering, quilting, patchwork-working, and tie-dyeing their identity,” said Shannon Stratton, chief curator at MAD.

The 1970s was a tumultuous era. With the growing disillusionment from the never-ending Vietnam War and the passions that arose from the Civil Rights Movement, many individuals rejected the American Dream as defined by James Truslow Adams in 1931—“life should be better and richer and fuller for everyone, with opportunity for each according to ability or achievement.” The men and women of the counterculture movement felt such ideas were not a blueprint for utopia, but a pathway to corporate greed, trampling of human rights, and social conformity.

In pursuit of a more authentic and natural way of living, a sub-culture of people developed devoted to a homegrown civilization rooted in self-reliance and craft. They wanted to feel connected to the land and, by extension, to their spiritual selves. So they looked to indigenous cultures for inspiration and created clothes that was both wearable art and symbols of their inner selves and their political stance.

Which is why this exhibition is so timely. Hand-woven pussy hats have become a symbol of protest (even the act of publicly knitting a pussy-hat has become a form of protest). In the last decade of so, people have turned to craft because people increasingly value authenticity and sustainability. This focus on craft has created a subculture of hipsters—the commercialized equivalent to hippies.

The exhibition spans two floors, occupying both the fourth and fifth floors of the museum. It is divided into five sections: Couture, Performance, Psychedelic Style, Funk & Flash—which includes quilted, patchworked, tie-dyed, and crocheted clothes that were inspired by Alexandra Jacopetti Hart’s Native Funk & Flash: An Emerging Folk Art, a deeply influential book for the counterculture movement, and Levi’s Denim Art Contest, which reflected the growing trend of the art of customizing denim.

On the 4th floor, the exhibition resembles a suburban, hippie rec room, circa 1970: macrame plant holders hang from the ceiling, on the walls are large tie-dye fabrics and hand-hooked shag rugs, bead curtains hang from the ceiling, and the entire room is made of dark, muted brown wood paneling. It is the perfect backdrop for the political, spiritual, and every-day dress on display. Highlights here include two Victorian-style dresses by Yvonne Parcella of the Wearable Art movement in Northern California, long, free-flowing garb of the cults created at this time, shoes in the form of rubber duckies, and toy cars by Apple Cobbler, reflecting his interest in American pop-culture ephemera.

The 5th floor is where the exhibition gets fanciful and ventures into the avant-garde. The walls are purple with a colorful gold and purple printed wallpaper, and the platforms for the mannequins are covered in gold paint with a mauve-toned paisley print on its side. Here too, walls of beads hang from the ceiling. Some of the highlights include pretty much anything by Kaisik Wong, whose cut-out ensembles topped with a helmet-like headpiece resemble medieval armor and showcase how craft can become couture in every sense of the word. There are also crocheted coats of many colors by 100 percent Birgitta that showcase the multi-use ethos of this era. Not only do the garments hang from mannequins, but behind them the coats adorn the walls—like colorful, tribalist art pieces.

The power of a counterculture movement is that, ironically, it becomes a source of inspiration for the very capitalist market and industry it stands in opposition to. It’s one of the great ironies of life; something “pure” will always be exploited for profit. “It’s sort of the shadow side of anything that sweeps across a whole generation of people really quickly,” said Cepress. But once it becomes commodified, the power is lost. As Alexandra Jacopetti Hart wrote in Native Funk & Flash, the book that inspired this exhibition, “when you mass-produce, you divide the power of your statement into as many pieces as the items you manufacture.” And so the movement either dies or evolves into a renewed push for creativity and personalization and craft.

And that’s the point of this exhibition. Cepress wants to inspire the next generation of “Counter Couture.” He wants people to come and see that “personal style can be something so much more than what they purchase or duplicate from what they see in an advertisement, and that they can actually take matters into their own hands, and create for themselves what they want.” 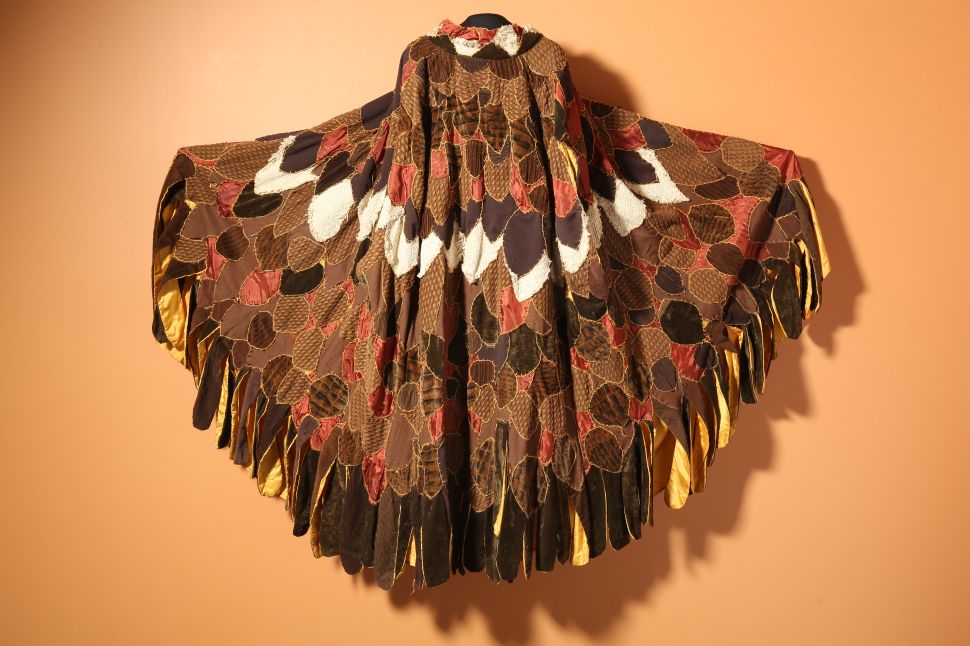