Manhattan Congresswoman Carolyn Maloney and Jewish community leaders called on President Donald Trump and his administration today to take more concrete measures to combat the wave of anti-Semitic hate crimes that has engulfed New York and the nation in the wake of his election.

U.S. Attorney Preet Bharara, the Federal Bureau of Investigation and the NYPD announced that they charged Juan Thompson—a disgraced former reporter for the Intercept—with allegedly stalking a former romantic interest by making bomb threats in her name to Jewish Community Centers and the Anti-Defamation League. He was arrested in St. Louis, Missouri this morning, according to Bharara’s office.

“Let’s not mince words, let’s call this what it is: domestic terrorism,” Maloney said at an event at Park East Synagogue. “Bomb threats directed at synagogues and the destruction of cemeteries are meant to instill fear, disrupt our lives and to individually achieve by violent criminal means what could never be achieved through the political process.”

She called on the U.S. Department of Justice to create an anti-Semitism task force, urged Congress to double the funding for the Urban Area Security Initiative Nonprofit Security Grant Program and announced new legislation for Holocaust education.

Maloney sent letters to Attorney General Jeff Sessions—currently under fire for failing to disclose meetings he held last year with the Russian ambassador—asking him to form the task force to examine the outbreak of anti-Semitic incidents. She also sent a letter to Education Secretary Betsy DeVos asking her department to adopt the definition of anti-Semitism developed by the State Department’s Special Envoy to Monitor and Combat Anti-Semitism when it investigates possible incidents of religious discrimination.

That commission has defined anti-Semitism as “a certain perception of Jews, which may be expressed as hatred toward Jews.”

Maloney noted that the FBI has reported a 67 percent increase in hate crimes against Muslim communities between 2014 and 2015.  She urged more elected officials to publicly condemn the spate of hate crimes.

Trump opened his speech before a joint session of Congress on Tuesday by condemning recent hate crimes against religious and racial minorities, particularly the desecration of headstones at Jewish cemeteries in Philadelphia in St. Louis and a shooting that claimed the life of an Indian man.

The congresswoman called those comments “very important,” but said he should help make her “concrete proposals” come to fruition.

Maloney is a member of the disempowered Democratic House minority, and it is unclear what chance her proposals have of passing.

Rabbi Arthur Schneier of the Park East Synagogue, a Holocaust survivor, said that he appreciates the fact that Maloney has hard, specific proposals to combat the problem. He linked the incidents in American to a tide of anti-Jewish sentiment rising across the globe.

“It’s a nightmare to see the rise of anti-Semitism in Europe and then coming to this land of freedom where we are united, great opportunities, there are some who want to bring back the demon of anti-Semitism by attacking synagogues…community centers, day schools,” Schneier said.

Schneier told the Observer that he’s grateful that the United States supports the Jewish community’s safety and security “regardless of the administration.”

“I think that the president’s statement to both houses of Congress, sadly that he had to make that statement because of the conditions that we’re facing,” he said. “I wish the demon of anti-Semitism would not be resuscitated, which has been.”

John Miller, the NYPD’s deputy commissioner intelligence and counter-terrorism, said that religious institutions enjoy the protection of his department’s House of Worship cars and the Critical Response Command, a “uniformed, high-profile, highly visible team” that is deployed to locations during higher threat periods.

He said the NYPD has not seen a specific credible threat of an actual act of violence connected to the threats and that so far, the recent calls seem to be aimed at creating fear, wreaking havoc and causing disruption and evacuations “as opposed to any organized terrorist plot.”

He hailed the arrest of Thompson as a breakthrough, noting the former journalist stands accused of using anonymous email and social media accounts to perpetrate his bizarre purported scheme.

“That is a step forward because it tells us no matter what technology you use to hide, no matter what shadow you put yourself behind, no matter how you shield your cowardice as you make these threats from behind whatever technical curtain you use, we will shine a light in whatever direction we have to,” Miller said. “You will be uncovered, you will be caught and you will be charged.”

But he noted that the investigation is still continuing—that other individuals were likely behind other threats and that the probe “will lead to their identity, too.”

Miller noted that more than 1,500 people work in the counter-terrorism intelligence field in the Police Department and, “with the press of a button,” the NYPD can transform 36,000 police officers into counter-terrorism officers.

“The FBI has the lead in this case but we’ve partnered with the FBI, the Secret Service and other partners in this investigation to work to developer leads and find out about the person or persons that are behind this,” he said. 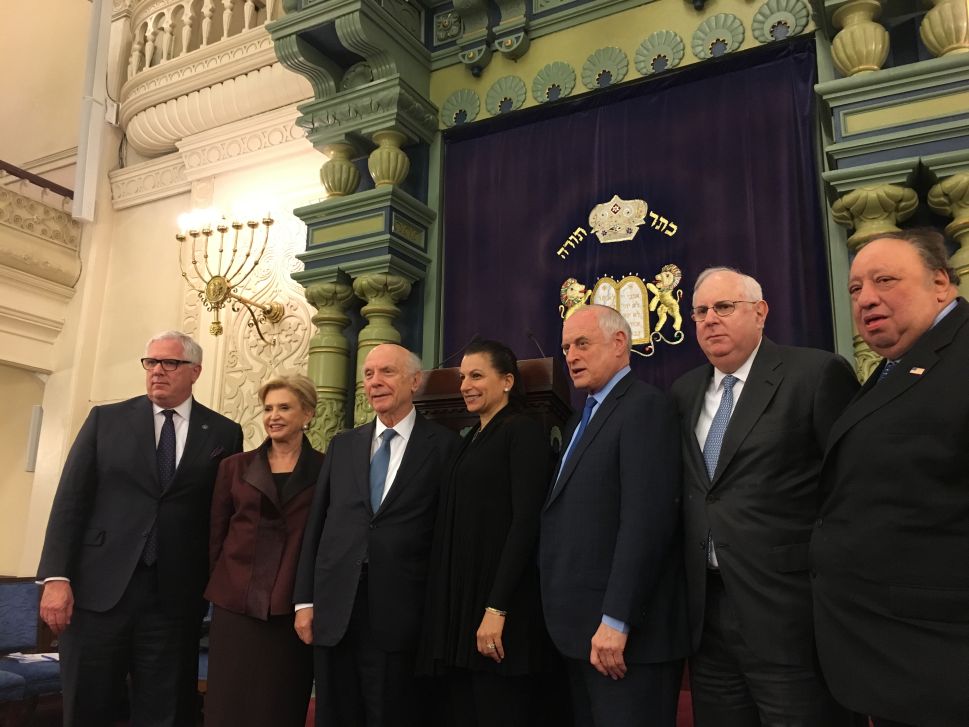