Mayor Bill de Blasio has made his opposition to President Donald Trump the core of his re-election bid, and his best-funded Republican opponent, real estate developer Paul Massey, has gone out of his way to say he wrote in ex-Mayor Michael Bloomberg at the polls last year—but one longshot contender for the city’s highest office has embraced his party’s commander-in-chief and some of his most controversial immigration policies wholeheartedly.

Rev. Michel Faulkner, former Jets defensive lineman-turned-minister, concluded his presentation to a gathering of the Brooklyn GOP last night with a lengthy quote from Trump’s first address to the joint session of Congress earlier this week—a quote he attributed to “a great president.” The first question from the audience concerned New York’s “sanctuary city” statutes, which bar local law enforcement from cooperating with federal immigration officials under most circumstances, policies the president has promised to penalize through funding cuts.

“Sanctuary cities are wrong,” Faulkner shouted to raucous applause. “This is a city of laws!”

Massey, who also spoke at the forum, has said if elected he would uphold the city’s three-decade policy of of shielding nonviolent undocumented immigrants from deportation.

Since declaring his candidacy in September 2015, Faulkner has raised only $53,705 and personally loaned his campaign $126,800, plus received an additional $26,075 from two creditors. His most recent filing with the city Campaign Finance Board found him almost $7,000 in the red.

Compare that to de Blasio, with his $2.2 million warchest as of last report—or Massey, who has amassed nearly $3 million, and spent two-thirds of it.

But according to Faulkner, there’s never been a more perfect moment for an African-American Republican to run for mayor of this majority-minority city, where Democrats enjoy a two-to-one enrollment advantage and where Hillary Clinton took 79 percent of the vote last fall. Mostly, he asserts, that’s because de Blasio is “so bad”: an “absentee mayor” who has neglected his municipal duties in his quest to become a national leader of the Democratic Party’s resurgent left wing.

“It’s important for us to understand, in this historic time, right now, New York City might be the last, best hope we have as conservatives for really stemming the tide on this progressive movement,” Faulkner told the crowd last night. “Can you imagine how things will turn, nationally, if we elect, when we elect, as we elect, a black conservative Republican as mayor of the City of New York?”

“If we cannot reach that group, we will never win another election,” he said. “I am the new face of the Republican Party.”

A leg injury ended Faulkner’s pro football career in 1982 after just one season.  The Washington, D.C. native headed south to get a master’s degree at Virginia Tech, and served for a few years as assistant dean of students at the late Rev. Jerry Falwell’s Liberty University.

He returned to New York to become pastor of a Times Square-area church in 1988, where he ran a soup kitchen, before moving his ministry uptown in the early 1990s.

Faulkner backed Rudolph Giuliani for mayor in 1993, and the Republican rewarded him with an array of appointments, including a spot on a task force on police-community relations. In 2010, Faulkner ran on the GOP line against now-retired Harlem Congressman Charles Rangel. He got 10 percent of the vote.

Like Giuliani, Faulkner has publicly endorsed and supported Trump both as a candidate and as president. Last night, he slammed de Blasio for leading demonstrations against the commander-in-chief, calling it a “waste of time and taxpayer money.”

“I was one of the very few people that went on record and said ‘yes, I’m voting for Donald Trump.’ And I can hold my head high, no problem,” Faulkner said. “There have been things he has said and done that I disagree with, but you know what, that’s my right as an American: to disagree with our president.”

The candidate seemed convince this position would not cost him votes in a city where—outside of a few mostly white, right-leaning precincts—the president is a target of protest and opprobrium.

“I support him. I’m not going to run away from that. However, I’m running to be the mayor of this City of New York,” he said. “People that hate the president, if they want to attach me to that, that’s fine. But most New Yorkers are saying ‘ah, who cares? I just want to see what you’re going to do in New York.'” 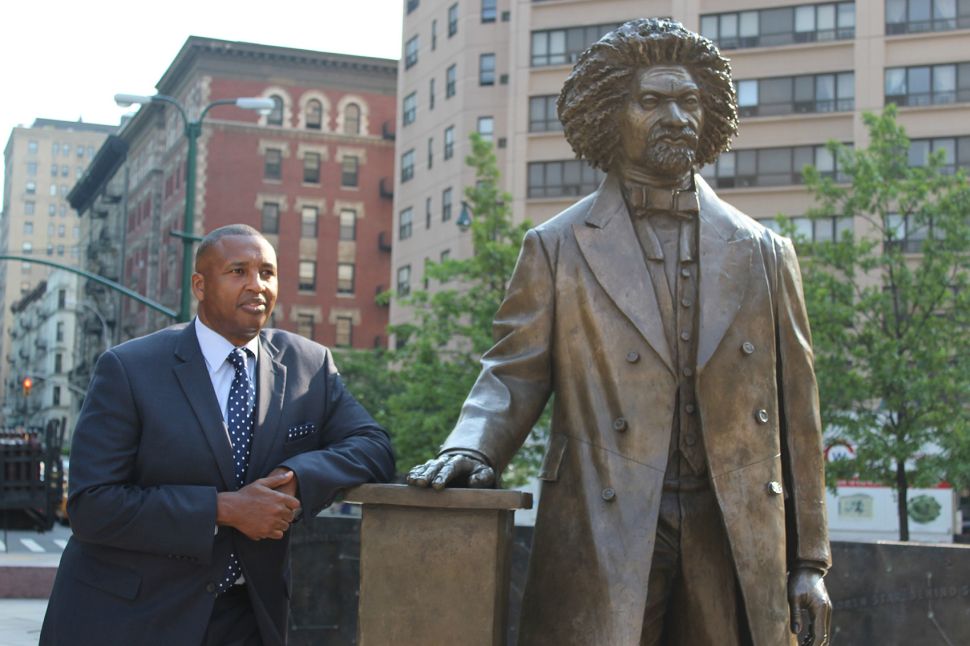