Meryl Streep is a certified legend with 20 Oscar nominations. She’s also a passionate political activist and critic of President Donald Trump, who has derided her as “overrated.”

Now she can add another accomplishment to her list: she’s the internet’s favorite meme.

Over the weekend a photo of Streep at the 2015 Screen Actors Guild Awards resurfaced on social media. She was cheering on the late, great Debbie Reynolds, who received a Life Achievement Award at the ceremony.

But the internet doesn’t care about context—they focused on the fact that it looked like Streep was screaming her head off at a rock concert.

So they combined the photo with song lyrics (everything from famous rock songs to commercial jingles) to make Streep look like a headbanger:

me: HERE I GO AGAIN pic.twitter.com/ZBZlLT0XPr

The Killers: How did it end up like this?

Britney: my loneliness is killin me

Britney: I must confess, I still believe

Me: WHOOO I. AM. FOREAL. pic.twitter.com/ASaFlGI0k4

Whitney: And above all this, I wish you loooooooove.

Shang: Lets get down to business

TV: I have a structured settlement but I need cash now…..

Given the increased interest in Streep’s singing, let’s hope a Mamma Mia sequel is on the horizon. 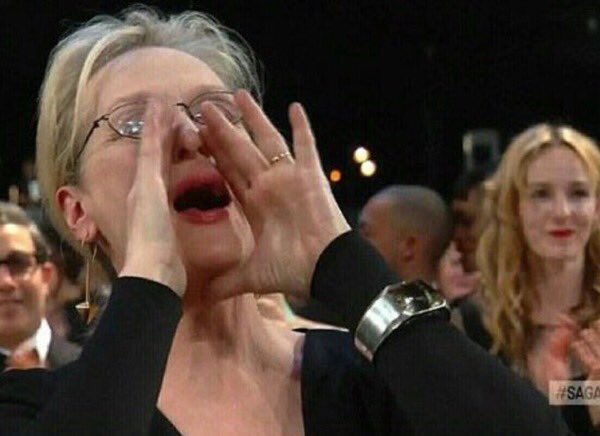