Milo Yiannopoulos achieved fame by bringing his controversial message to college campuses. He found a passionate fan base with those who felt despised by leftist administrators, faculty, and fellow students. A gay conservative, he lost his book deal and his job at Breitbart after a video turned up in which he joked about adult-to-adolescent sex.

Without a doubt, Milo was rude and nasty. He said fat people were “fucking disgusting.” He said “shame on you” to women in the audience who wore a hijab. If one reasonably argues that the hijab itself disrespects women, then ridiculing Muslim women in one’s audience is (at least) equally shameful.

For many in his audience, though, it was cathartic to hear him speak full-voiced against political correctness. After all, far from institutions of higher learning, most college campuses are mere conformity centers, with their trigger warnings, safe spaces, privilege checking, abortion shout outs, disgust for “straight white men,” and all the rest of it.

College has been hell on earth for independent thinkers for many years. In 2006, Oregon State University trashed its conservative newspaper, The Liberty, dumping its distribution bins in a far field. The administration called it a “campus beatification project.” Supporters of the newspaper were paid a six-figure settlement in a lawsuit filed against the university in a 2014 after the 9th U.S. Circuit Court of Appeals ruled that there was, “little trouble finding constitutional violations.” In 2015, when the Antioch Review published an essay questioning transgenderism—written by a cross-dressing gay man—thousands of social justice warriors demanded that the oldest continuously publishing literary review in the country close its doors.

In so many classrooms all around the country, everything under the sun is racist, sexist, fascist, the author of every other novel a misogynist, a colonialist. Despite enormous pressure to conform, a handful of independent students—conservative, libertarian, or simply nonconforming—refuse the program and hold onto their beliefs.

Enter Milo, in pearls and lipstick, a curious soldier in the free-speech cause. Many students were gleeful to find a fighter every bit as nasty as the campus cultural warriors who sought to silence them.

At his gatherings, Milo laid waste to PC university values. He was unafraid, and he certainly spoke his mind, when few others seemed to have the courage in a milieu where saying the wrong thing can lead to getting fired or expelled. Like him or not, Milo gets points for courage.

My own feeling is that Milo was often thin stuff—he was one-dimensional, neglecting to locate any other personality trait that might mitigate his constant judgments about people on the left. He forever quoted silly statistics and “facts.” “The federal government spent three million dollars last year working out why (lesbians) are all so fat.” His rhetoric was absent goodwill that might truly persuade, and therefore he lacked complexity and depth on the stage. In short, too much stupidity issued from his pretty mouth. “Ugly people have always been the leaders of the progressive movement.” Such comments, one after another, embolden the mean, alienate the good, and tire the ones in between.

Allow me to backpedal. The stray nasty comment is fun. Each of us needs to bring out the devil sometimes, before our kindreds. Good people right and left do so, at the bar, or on Facebook. But we also hope that admired public figures—like the friends we choose—show kindness and introspection sometimes. But Milo seemed a one-trick orator, whose purpose amounted to belittling everyone on the left, for its own sake.

Milo revealed little depth or human warmth. He was no Ayaan Hersi Alli, whose own genital mutilation gives force to her quiet, inclusive arguments against truly misogynistic practices. He was no Camille Paglia either. Though Camille also voices brash complaint against third-wave feminism, her formidable education—and her paradoxical right/left, lesbian-feminist articulations about art and culture—continue to seduce the stray ones wandering between the claustrophobic ideologies of the left and right.

All of this said, sometimes Milo got it right.

On that point, Milo is on the money. In England, there is no First Amendment. My former advisor at the Iowa Writers’ Workshop, Marilynne Robison, published Mother Country in 1989, exploring the buildup of nuclear waste at a processing plant in England. British Greenpeace filed a libel suit against her, and her book remains banned in that country to this day.

In Puritanical, free-speech America, however, when we don’t like people for their ideas, we use the old lawyer’s trick of smearing them on a moral charge.

Milo wasn’t taken down by his comments about post-pubescent boys and young men. The behaviors he described were distasteful, but no more so than Woody Allen’s or any number of public figures accused of sleeping with teenagers but who get to continue their careers. Milo joked about a priest who he said helped him with his sexual technique. It was disgusting and horrifying, and funny and strange, too, when understood as dark humor. I can’t think of anyone more able, socially, to make such a joke than one who was sexually mistreated as an adolescent, as Milo was. The notion that progressives scorn him for such remarks, like so many high-chinned, Cotton Mathers, amounts to absurdity.

As a student and college instructor with two masters degrees, I have spent twenty-five years around people who share my love for Oscar Wilde. Not once have I heard a professor use Oscar’s famously pederast comments and behaviors against him, though I do recall a couple of right-wing Christian undergraduates speaking up to chastise the author.

Milo is no Oscar Wilde, but it’s clear he was taken out and shot for his smart ass, immature positions that are rightly abhorred, though perhaps overly feared by a right and left all too worried about speech. I support Milo’s right to speak and publish. After all, America wouldn’t be the same without the freedom to say as one wishes, no matter how disquieting and wrongheaded the message.

Ryan Blacketter is the author of Down in the River. He’s starting a site exploring culture and the arts called The Monument Club. 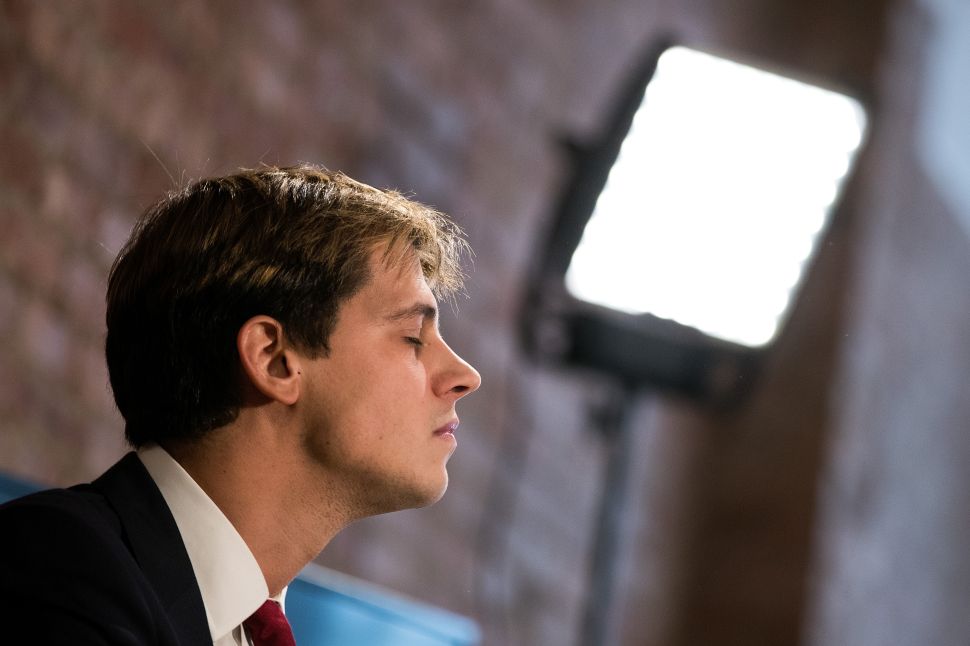