There’s a scene in the first episode of the show Billions on Showtime where the mega-rich guy’s son pulls a little trick on his brother. They are betting on whether or not the little brother knows where some city is. The little brother acts like he doesn’t, gets his older brother to make a ridiculous bet about it, and then reveals that he does. Mr. Billions then goes on to explain to his older son that sometimes it is an advantage to make yourself look foolish in the short term for a larger gain. Also, be careful with episode one of Billions because the very first scene of that show is Paul Giamatti getting peed on which is not everyone’s’ bag, baby.

This first episode featuring the Champions is not a good episode. I very much disliked this episode. I wanted so much more from this episode. But I will not be conned. I know that this is just leading up to an amazing next episode. Here is my beef with this episode.

1) The idea of setting up the Underdogs to believe there are no previous winners all while teasing a bunch of fan favorites are on their way is brilliant. Everyone who loves this show has been so hyped for this moment. I’ve watched the teaser trailer when the Champs walk out in slow motion over a hundred times. I can recite to you the order in which the Champs are lined up from memory. It’s like the scene in that too long Lord of the Rings movie where the good guys are losing but then Gandalf was like look at the sun and he shows up with a whole army and you get the chills and tears in your eyes. The way the first four eps were edited together so that an Underdog would get too cocky and then they’d cut to the Champs training like Rocky IV-with the beard in Russia—so good. I wanted to see the Champs come in and dominate. Strike a hard and fast blow—knock these Underdogs down a peg. So what do they do? Set up the scenario so that it is six against four in a challenge that basically comes down to the more bodies you have, the better. The fact that the guys even tied it up before losing the last round is miraculous. But none of the Underdogs are skimpy. They’ve already been vetted by the first part of the show. Everyone there has won something to get there. All the losers of the losers are gone. The Champs were set up to lose.

2) They really split the Champs and Underdogs into two teams? And are having forced alternating evictions regardless of who wins the challenges? Ridiculous. Now the actual challenges are meaningless. The “banking money” idea means nothing to me. If you’ve asked me who has won a season, I can tell you. If you ask me how much money they’ve won, I have no idea. You know why? Because the amount of money is only important to the person winning it. I would watch this show if they were competing for donated trophies like the Westminster Dog Show. Banking money makes no difference to the audience. Yes, now we have the opportunity to see the Champs face each other in an elimination. CT vs. Zach. Or Laurel vs. Cara. But guess what, we could have had that anyway. If you set it up so that the team that wins the challenge is exempt, the winners would pick who went in and would for sure make those major matchups happen. Alternating the eliminations takes so much fun out of the game. Imagine it was singles play and not teams. Wouldn’t it be better to start off with twelve Underdogs and eight champions and try and watch them flip the house for votes? This is what Johnny Bananas lives for. You’re telling me he couldn’t get Dario to turn on his alliance again for a chance to go to the finals and come in third? You’re telling me that Johnny would stay loyal to the Champs and bring CT and Darrell into a final with him when he could bring a couple more layups to the end and win again? By setting the game up this way, they’ve limited the ability of the greats to do what makes them great.

3) No eviction. We didn’t even get to see who the matchups were going to be. Ashley scored first and picked Tony. Dario scored for the guys and picked Sylvia. But we didn’t get to see the vote yet. I’ll admit, the current in-fighting on the Underdogs wouldn’t have happened if the game was set up differently. But I’m not sure that the fighting was even entertaining. I can’t even figure out what the two sides of the argument are. I guess Cory wants the team to unite and vote as one and Shane doesn’t want to get chosen so he’s not evicted. Those aren’t really two opposing sides. It’s just that there are only five people available and nobody wants it to go to an eviction. The best part of it all is Cory repeatedly pulling on his jersey and saying “aren’t these the same color?” like he was doing the Challenge version of the Merchant of Venice Shylock “If you prick us” speech. That’s the only upside I saw to it.

4) This was a very good episode of The Real World. If this was a The Real World episode, I would be so down. You got Dario trying to pick up Ashley with lines so corny that Orville Redenbacher was like “damn even I can’t get those popping.” You got Kailah shotgunning vodka out the bottle and chasing it with a beer so hard that she peed in her bed. And not just like she was asleep and peed quietly. From the way Tony mimed it, she rolled her pants down and peed a stream up into the air like a sideways Calvin and Hobbes decal on a Ford F-150. You got Johnny and Zach swimming in the pool making fun of the girls with recycled Twitter jokes. Seriously, that’s the IRL version of a self-retweet. You got Zach and Jenna circling each other, still hot to have some version of Norse Gods gorgeous people sex that probably is the actual scientific reason behind where thunder comes from. And you’ve got Nicole putting the full-court press on Cara Maria all while being elbow deep in her second or third or fourth jar of peanut butter. I am down for all of this. It makes my heart sing the entire discography of Luther Vandross. But still, I need the game. Give me the game.

I’ve heard people say that this is the best season of the Challenge. Maybe it is and maybe it isn’t. But last night’s episode was not a good one. That said, don’t fall for the okie-doke. Next week will bring it all home. Next week we’ll get the episode we deserve. Next week we will all be champions. 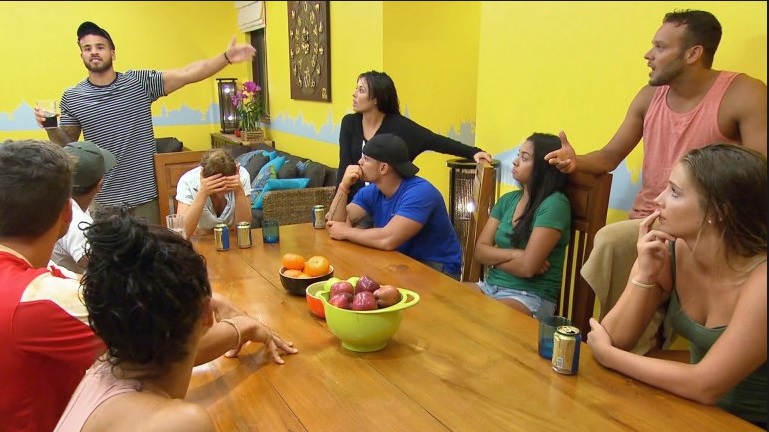